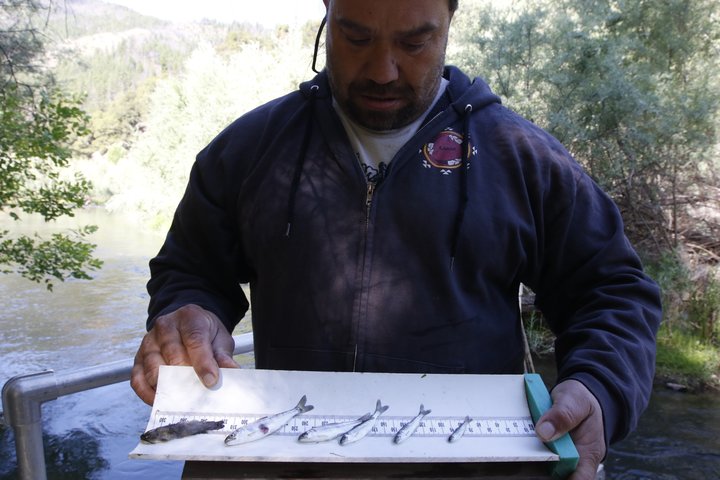 The Karuk Tribe in Northern California has declared a state of climate emergency in response to record low precipitation in the Klamath Basin as a massive juvenile salmon kill unfolds on the Klamath River.

“This emergency declaration acknowledges the reality that climate change is upon us, and the dangers that it poses to rivers, forests, wildlife and communities,” according to the Tribe in their “Resolution Declaring a State of Emergency Due to Climate Change.”

The resolution points out “there has been a consensus among 97% of Climate scientists that Climate Change is a reality.”

It also said the Karuk Tribe’s fish monitoring efforts currently detect a greater than 95% prevalence of infection among Chinook and Coho Salmon.

In a statement on June 1, the Tribe said, “Hydrological conditions in the Klamath River Basin are the worst in modern history, although in recent years this has become an all-too-common refrain. Ecosystems and economies all along the California/Oregon border are strained to their breaking point. A massive fish kill is currently underway in the Klamath River that could result in losing an entire generation of salmon.”

“Our monitoring traps are full of dead juvenile salmon,” said Toz Soto, Fisheries Program Manager for the Karuk Tribe. “The few fish still alive are infected with disease. It’s a catastrophic blow to the fishery and Karuk culture.”

The Tribe pointed out that the disease-causing parasite Ceratonova shasta (C. shasta) has been linked to Klamath salmon declines for decades. The Tribe attributed the proliferation of the disease to low and warm water conditions caused by both the presence of four PacifiCorp dams on the Klamath River and the Bureau of Reclamation’s management of the river.

“A complex of dams in the mid-Klamath disrupt natural flow patterns and cause warmer than normal water temperatures. This creates an ideal habitat for the parasite to flourish downstream of the dams. However; these dams don’t control how much water is in the Klamath River, that’s a function of how the Bureau of Reclamation (BOR) manages irrigation diversions from Upper Klamath Lake in Oregon, 50 miles upstream,” the Tribe stated.

The current BOR operations plan calls for “flushing flows” to scour the river channel and dilute parasites during disease outbreaks. This year, historically low inflows to Upper Klamath Lake led BOR to rule out a flushing flow to the river, according to the Tribe.

“BOR’s decision to not provide flushing flows is allowing a massive juvenile fish kill to take place. Over 95% of sampled fish are infected. We have to keep as much water in the river as possible to allow some fish to survive,” stated Soto.

The Tribe pointed out that state and federal government officials have made drought declarations in the Klamath Basin in 8 out of the last 12 years. The Karuk Tribe says this year’s crisis is “not an aberrant weather pattern but reflects a change in climate. “

“It’s time to face the reality of climate change which means we must change how we manage the Klamath’s water resources,” noted Karuk Chairman Russell ‘Buster’ Attebery. “We need long term solutions to adapt to this new climate immediately, or it will be the end for salmon and the cultures that depend on them.”

In order to protect as many fish as possible, the Karuk Tribe urges state and federal agencies to “broker temporary water transactions to keep critical stream reaches wet, but also point to long term solutions to recover fisheries and make the ecosystem resilient in the fact of climate change.”

The Tribe said “relief for salmon is on the horizon,” with an agreement by PacifiCorp, the federal government, state governor and Tribes in place to remove the lower four Klamath River dams in 2023. The dams offer no irrigation diversions or flood protection and Berkshire Energy, the parent company of PacifiCorp, has agreed to removal.

“Dam removal will improve water quality, disrupt the habitat for disease vectors, and allow salmon to access historic spawning grounds. We are praying the fish can hang on until then,” concluded Attebery.

If adopted by the Board, the plan, an alternative to the Bureau of Reclamation’s temperature management plan, would significantly reduce salmon-killing high temperature water releases from Shasta and Trinity reservoirs. It will also protect carryover storage in the event of another dry year: https://www.waterboards.ca.gov/waterrights/water_issues/programs/drought/sacramento_river/

2. Eliminate June-through-October use of the Spring Creek power tunnel between Whiskeytown and Keswick reservoirs.

The situation is dire for Chinook salmon on the Sacramento River below Keswick Dam. As the three groups said in a statement:

“The crisis, building for some time, has accelerated dramatically in recent days. On May 21, the California Department of Fish and Wildlife reported that endangered winter-run Chinook salmon were dying below Keswick Dam near Redding from releases of warm water taken from the top of Shasta Reservoir.

Salmon need cold, clean water to survive. But the water released in May by the U. S. Bureau of Reclamation to supply a small number of agricultural irrigators exceeded 61º F. This water temperature was far above the 56ºF standard protective of spawning salmon and the 53.5ºF needed to protect salmon eggs. The releases occurred despite calls from the California Department of Fish and Wildlife (CDFG) and the National Marine Fisheries Service to keep river temperatures at or below 56ºF.

The situation is particularly dire because the Sacramento River’s salmon were already at the tipping point. According to the CDFW, Sacramento River mainstem winter-run, spring-run and fall-run Chinook salmon (1970-1974 v. 2015-2019) have declined 91.0, 99.9 and 79.7 percent, respectively. Fall-run salmon are the largest run on the Sacramento River and the mainstay of California’s commercial and sport salmon fisheries.”

“Despite excessive April-May water deliveries, Shasta Reservoir still has sufficient cold water to save the salmon,” said CSPA Executive Director Bill Jennings. “Unfortunately, the Bureau has unreasonably delivered exorbitant amounts of water to Central Valley agribusiness. The State Water Board has failed to meaningfully act to stop this unfolding disaster. The Board must limit the Bureau’s agricultural water deliveries to protect the needs of fisheries and urban areas.”

Besides helping salmon survive on the Sacramento River, the plan will also help save imperiled salmon on the lower Klamath and Trinity rivers, according to Tom Stokely, the co-director of Save California Salmon, who spoke briefly at yesterday’s virtual State Water Board hearing.

In addition to urging the Water Board to back the emergency water management plan developed by the three groups, Regina Chichizola, co-director of Save California Salmon, called on the Board to adopt emergency regulations along the Scott and Shasta rivers to save imperiled coho and chinook salmon.

“I’m sure many of you are aware there has been a juvenile fish kill that is ongoing in the Klamath River,” testified Chichizola. “We’re losing all of our juvenile salmon this year. This isn’t the first time this has happened.”

“We pretty much have had no salmon coming back for the last six years in a row and it’s just a devastating situation for our community. I know there’s nothing we can do at this point about these dead fish. However, there is a lot we can do in other situations and into tributaries of the Klamath River,” she said.

Photo of dead Klamath River juvenile Chinook salmon courtesy of Karuk Tribe.
Add Your Comments
Support Independent Media
We are 100% volunteer and depend on your participation to sustain our efforts!