We Blocked the Boat in Oakland! Mobilize AGAIN 4pm 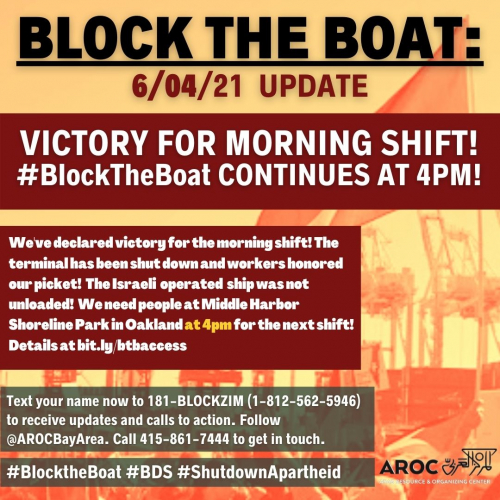 The fight has just begun. We are calling for more pickets at 4PM!

Shuttles will be taking people from West Oakland BART to Middle Harbor Shoreline Park beginning at 3pm. Please look out for signs around BART and on vehicles. More information: https://blocktheboat.org/transportation-and-accessibility/

Several hundred Bay Area residents successfully mobilized to the Port of Oakland to participate in #BlockTheBoat, a campaign led by the Arab Resource & Organizing Center (AROC) to prevent Israeli owned and operated cargo ships from being worked and unloaded in the Bay Area. AROC and the broader community claimed victory after four hours of picketing when dockworkers with the International Longshore and Warehouse Union (ILWU) Local 10 honored the picket and did not unload the Volans, a vessel operated by Israeli shipping company ZIM. The terminal operated by TraPac is shut down until the evening shifts. The Volans is still docked with all its Oakland-bound cargo on board.

Today’s victory is a win for the international movement to boycott, divest and sanction the apartheid state of Israel. Let's keep up the moomentum and ensure that ship does not unload in Oakland tonight or ever!

Todays mobilizations are part of an international week of action to #BlockTheBoat from June 2 - June 9th. Social justice organizations in port cities are organizing community pickets to prevent ZIM ships from unloading anywhere. #BlocktheBoat has received over 100 endorsements from labor unions, faith, and community organizations, including the Congress of South African Trade Unions (COSATU), the largest federation of trade unions in South Africa, representing 1.8 million people.

Join us as we mobilize in Oakland to demonstrate to the world that apartheid-profiteering is not welcome anywhere, and that we will continue to echo the calls to Boycott, Divest and Sanction Israel until Palestine is free!
END_OF_DOCUMENT_TOKEN_TO_BE_REPLACED
Added to the calendar on Fri, Jun 4, 2021 2:41PM
Add Your Comments
Support Independent Media
We are 100% volunteer and depend on your participation to sustain our efforts!