Abortion is Health Care: SCOTUS and the Future of Reproductive Freedom Rights 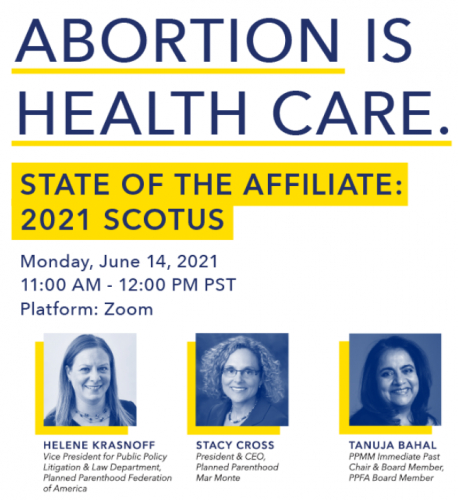 
What will happen if the new Supreme Court erases Roe?

The U.S. Supreme Court's decision to take up the case involving Mississippi's 15-week abortion ban is disturbing, especially because it is the first abortion case to be heard since the confirmation of conservative Justice Amy Coney Barrett. According to the New York Times, many legal experts believe this means Roe v. Wade is about to be overturned or made irrelevant by the new, far right 6-3 majority on the Court.

As you can imagine, if Roe falls, it will be devastating to millions of people in over 20 states who will lose the right to abortion entirely. Join Stacy Cross of PPMM, Tanuja Bahal of PPFA, and PPFA attorney Helene Krasnoff for an urgent and timely discussion about what the ramifications of such a decision might be, including for states like California and Nevada.

--Tanuja Bahal, PPMM Immediate Past Chair & Board Member, PPFA Board Member
END_OF_DOCUMENT_TOKEN_TO_BE_REPLACED
Added to the calendar on Thu, Jun 3, 2021 7:26PM
Add Your Comments
Support Independent Media
We are 100% volunteer and depend on your participation to sustain our efforts!