Add an Event
Newswire
Calendar
Features
Home
Donate
From the Open-Publishing Calendar
From the Open-Publishing Newswire
Indybay Feature
Related Categories: U.S. | Media Activism & Independent Media
Pacifica Houston KPFT White Management Coup
by Pacifica Fightback
Wednesday Jun 2nd, 2021 5:35 PM
On the one year anniversary of the death of George Floyd the Pacifica Houston management organized a coup of Black, Brown and radical programming. They did this without notice to the programmers or the local station board. 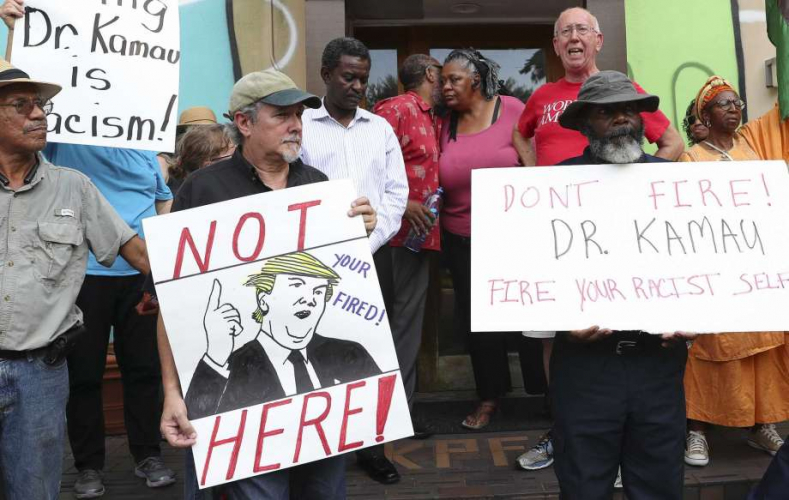 Not only is this move an assault on communities of color, local programmers, and radicals in Houston, the removal of shows for diverse communities threatens grant funding from the Corporation for Public Broadcasting. These programming changes were made without any consultation with the programmers,the community, or with the Local Station Board. These changes take place just before a crucial vote being pushed by New Day Pacifica, a disruptive Pacifica faction, to institute anti-democratic changes in Pacifica Network governance (below).

Without being authorized to do so, New Day Pacifica sent out emails widely prominently featuring a photo of Jane Fonda, and falsely claiming she was an endorser to their platform, only to be forced to take it down soon thereafter.

White former managers and directors Duane Bradley, Bill Crosier, Jack Valinski, and Larry Winters continue to influence policy, finances, programming, and politics at the station, and continue to have prime time slots on the KPFT FM programming grid. The first manager of color in the entire 40+ year history of KPFT, interim manager Dr. Obidike Kamau, was fired by the white management and removed from the station by Houston police.

In resistance to these proposed changes, Pacifica Fight Back (pacificafightback.org) has been joined by Mumia Abu Jamal, Danny Glover, Cindy Sheehan, Harry Belafonte, Abby Martin, Leonard Peltier and others to say, 'Vote No!"
https://pacificafightback.org 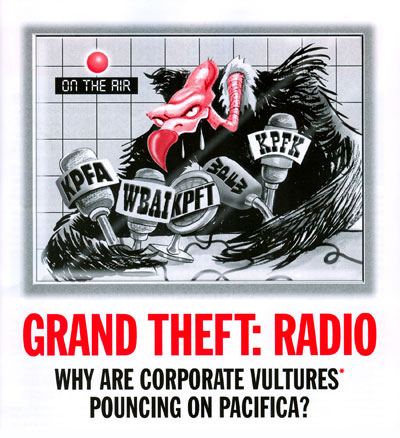 The latest effort to destroy the Pacifica network and sell off WBAI and KPFT is being led by a group called "New Day Pacifica". They supported the illegal shutdown of WBAI and also improperly used the endorsement of Jane Fonda in their advertising campaign. Their supporters mostly the paid staff of KPFA and KPFK and apparently deceptive practices are ok for these staffers in their campaign to corporatize Pacifica and the stations. The attack on programmers at KPFT are connected to the actions of KPFA management.
https://pacificafightback.org
Add Your Comments
§Pacifica Houston KPFT Programming
by Olan Perke (olanperke [at] gmail.com)
Thursday Jun 3rd, 2021 10:17 AM
In addition to the massive change to the programming schedule of cancelling so many shows on the FM signal and moving specific shows (white) to better timeslots, they moved the remaining shows (people of color) to worse timeslots. They moved Connect the Dots with Muhammad to 10pm Thursdays from 3pm Wednesdays, Coming to America with Immigration Lawyers to Saturdays at 5am from 7pm Tuesdays, and Arab Voices with Said (a syndicated program) to 10pm Tuesdays from Wednesdays at 6pm, which I used to listen to on my way home from work on Wednesdays. What is going on at KPFT?
Add a Comment
§Shun those who stoke the divide
by Akio Tanaka
Friday Jun 4th, 2021 6:02 AM
Few years ago when Dr. Kamau was fired, Ted Weisgal said that iED did not follow the Bylaws in firing Dr. Kamau.
Ted cited his friend at Temple University who said there is no difference between interim-GM and GM.
The friend was talking about the power and duties of the GM.
There is a difference between hiring and firing of interim-GM and GM.
The hiring and firing of GM is prescribed in the Bylaws; the hiring and firing of interim-GM is at the discretion of the iED or ED.
Ted conflated the two which stoked the racial divide at KPFT.
Unfortunately, at Pacifica, the entire governance system has been hijacked by competing factions consisting of some self-interested individuals, who have gamed the system to ensure that they control portions of the local station boards.
To end the factionalism, a place to start is to shun those who stoke the divide: black and brown vs white, East Coast vs West Coast.
Add a Comment
§Factionalism? Not! - vote No!
by long time listener-supporter
Sunday Jun 6th, 2021 9:17 PM
The "factionalism" is and has always been because NewDay and all its previous iterations are trying to grab KPFA for themselves regardless of what happens to the rest of the only remaining progressive radio network in the US, 5 stations in major metropolitan areas and over 200 affiliate stations which share some of our programming.
Our "faction" is those of us who won't allow this to happen. Our "faction" is here because Aki's faction is there and determined to fool people into giving them our station/network for pennies on the dollar, while running us into the ground with endless lawsuits and other financial burdens. This has been going on for decades. They obstructed the democratic governance and mishandled the finances, and now insist that democratic governance is to blame.
Don't be fooled! Vote NO!

{Sorry if this is a duplicate - first try didn't seem to go through.}
http://PacificaDemocracyProject.org
Add a Comment
§Cause of Factionalism
by Repost
Tuesday Jun 8th, 2021 7:03 AM
“In our zeal to replace the old Board of Directors that ignored the history and purposes of the Foundation and the wishes of the membership in 2003 we created what we thought to be a truly democratic method for choosing a new board. Instead, a Frankenstein Board has emerged. We mistakenly believed that by including the element of single transferable voting in electing local and national Board members that the resulting Board(s) would be able to resolve the differing interests of various factions through dialogue and mutual commitment to the best interests of the membership and the Foundation. However, what has happened instead is that this entire governance system has been hijacked by competing factions consisting of some self-interested individuals, in league with small splinter groups, who have gamed the system to ensure that they control portions of the local station boards. The factions have passed control of the national Board of Directors back and forth like a ping-pong ball for years, with resulting chaos and decline of the network. What nonprofit corporation can survive 16 executive directors in 10 years? That is the track record of Pacifica.”

“I support efforts to rewrite the by-laws, hopefully crafting ones that genuinely protect the Foundation from its current, catastrophic management system.”

Carol Spooner
Add a Comment
§No comment from New Day on the Original Post
by It's Telling
Tuesday Jun 8th, 2021 10:10 AM
It's telling there is no meaningful response from Tanaka or Spooner about the programming at the Houston station and the content of the original post. They don't want to engage about the purging of most of Houston's Black and Brown programming to once again prioritize Americana music. This is a station that once broadcast in 11 languages.

Instead they continue to carry on about factions and sides, as if holding more seats on the board for their faction is what's important, instead of what's actually on the radio and what Pacifica stands for in the world.

What's "divisive" is New Day's proclamation that no one from Pacifica's two East Coast and much Blacker stations, WPFW and WBAI, are restricted from any officer position on the board until 2024. Only Californians and Texans are allowed.

Apparently the East Coast stations are like "FrankensteiI can hear it, can you?

This is consistent with New Day proponents Ian Masters claim that "white elitism" is a trope that doesn't need to be taken seriously because Pacifica is exempt from the general issue of racism in media.

Guess what? It isn't.

And a vote for New Day is a vote that you agree that white supremacy is not a serious issue and what this original post is discussing is unimportant and "monstrous".

No, people of color who want their voices heard are not monsters.

And the right vote on the New Day bylaws is a hard no.

It's the people who silence black and brown voices, who perpetuate the inequalities at Pacifica, who are stoking the divide, not the people who are pointing out the problem.

Don't install hand-picked appointees who refuse to address the reasons for the divisions at our radio stations. Vote NO in the bylaws referendum, and make sure your voice isn't taken away next!
Add a Comment
§New Day wants to control Pacifica or destroy it
by East Coast listener
Wednesday Jun 9th, 2021 6:00 AM
Akio Tanaka's self-serving justification of his faction's latest coup attempt should not fool anyone. Everytime he writes to justify New Day, he conveniently does not mention his self-interest that he is one of the four people to be guaranteed a National Board seat should his bylaws referendum pass. A rather significant conflict of interest, yes?

Everyone, please vote no on the bylaws referendum. We see what has just happened in Houston, and there will be more of that on other stations should New Day gain control.
Add a Comment
Support Independent Media
We are 100% volunteer and depend on your participation to sustain our efforts!