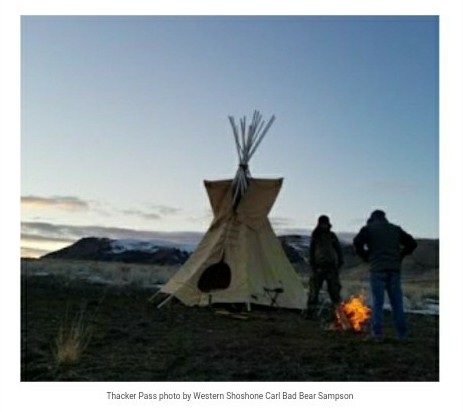 RENO, Nevada — Today four conservation and public accountability groups filed for a preliminary injunction in the Federal District Court in Reno, asking the court to prohibit construction of the Thacker Pass lithium mine.

The fast-tracked mine was approved by the Bureau of Land Management in January 2021, only five days before President Biden took office and less than one year after the mine began its environmental review process. The four groups filed federal litigation challenging the mine’s approval in February 2021.

“We have been very reasonable about this,” said Kelly Fuller, Energy and Mining Campaign Director for Western Watersheds Project. “We talked in good faith with the Bureau of Land Management and the mining company for several weeks, trying to negotiate an agreement that mining activities would not begin until the merits of this case could be heard by the court. But talks failed, which has left us no choice but to ask the court to step in and halt the destruction.”

Resource studies at the mine site are expected to begin on or soon after June 23, 2021. They will include surface disturbance, mechanized trench excavation, and removal of wildlife habitat and vegetation. As a result, cultural sites are likely to be disturbed before the Fort McDermitt Paiute and Shoshone Tribes and other tribes will have been properly consulted.

Major mine construction on thousands of acres of public land is planned to begin in the fall. The company’s CEO recently stated that it was on the “cusp of construction.” The groups request the federal court to block ground and habitat disturbance operations until the case can be fully heard on the merits.

“People in the affected communities have been calling for assurance that Thacker Pass will be protected during litigation,” said John Hadder, Executive Director of Great Basin Resource Watch. “If we do not act now, Lithium Nevada will destroy significant cultural areas and habitat before the courts will have determined whether the mine should be allowed under law.”

Thacker Pass is critically important to wildlife because it is an important habitat linkage between the Double H Mountains to the Montana Mountains. The pass also provides lower-elevation habitat that wildlife need to survive the winter. It contains thousands of acres of the most important type of greater sage-grouse habitat, designated as Priority Habitat in federal plans, and two pronghorn migration corridors. Golden eagles nesting in the nearby cliffs and canyons forage here for food to feed their chicks. Local springs are the only place in the world where the Kings River pyrg, a rare type of springsnail, are known to live.

“The enormity of the irreversible destruction Lithium Nevada’s giant mine would cause to the region’s wildlife, water, natural values and cultural sites is hard to comprehend,” said Katie Fite, Director of Public Lands at Wildlands Defense. “BLM’s slipshod analysis only scratched the surface, and habitat for a great diversity of species is jeopardized. It also flies in the face of BLM promises to preserve sage-grouse, whose numbers have declined by 80%, with the Great Basin population particularly imperiled.”

Today’s motion for preliminary injunction and the prior legal complaint allege that the Bureau of Land Management violated federal laws when it approved the Thacker Pass Lithium Mine’s Plans of Operation on January 15, 2021, including the National Environmental Policy Act and Federal Land Policy and Management Act.

“The Bureau of Land Management’s fast-tracked approval of the Thacker Pass Lithium Mine endangers important old-growth sagebrush and aquatic ecosystems of the Great Basin,” said Kevin Emmerich, Director of Basin and Range Watch. “New ground disturbance could impact sagebrush-dependent species like pygmy rabbit and sage-grouse and eventually enable an open-pit mine that will push endemic springsnails and Federally protected Lahontan cutthroat trout closer to extinction.”

The four groups further argue that BLM failed in its duty to protect public resources by allowing a mine that will be a source of groundwater pollution for at least 300 years and not requiring long-term financial assurances.

According to Lithium Nevada Corporation’s Plans of Operation, the mine would entail:
excavation of a large open pit roughly 2.3 miles long by about half a mile at the widest removal of up to 17.2 million tons of rock and ore per year direct surface disturbance of 5,694 acres (total project size would be 17,933 acres) on-site sulfuric acid plant – up to 5,800 tons of acid per day ultimately pumping up to 1.7 billion gallons of water per year
estimated active surface mining for 41 years, and 5 years of reclamation.

The Thacker Pass mine would be built on the traditional lands of the Paiute and Shoshone peoples, who have not given their consent to the mine.

Western Watersheds Project is a nonprofit environmental conservation group dedicated to protecting and restoring wildlife and watersheds throughout the American West.

Great Basin Resource Watch is a nonprofit public interest organization that works with communities to protect their health, land, air, water, and wildlife of the Great Basin from the adverse effects of mining and resource extraction.

Basin and Range Watch is a nonprofit working to conserve the deserts of Nevada and California and to educate the public about the diversity of life, culture, and history of the ecosystems and wild lands of the desert.

Wildlands Defense works to inspire and empower the preservation of wild lands, wildlife and biodiversity in the West.

Copyright, Great Basin Resource Watch.
https://bsnorrell.blogspot.com/2021/05/tha...
Add Your Comments
Support Independent Media
We are 100% volunteer and depend on your participation to sustain our efforts!