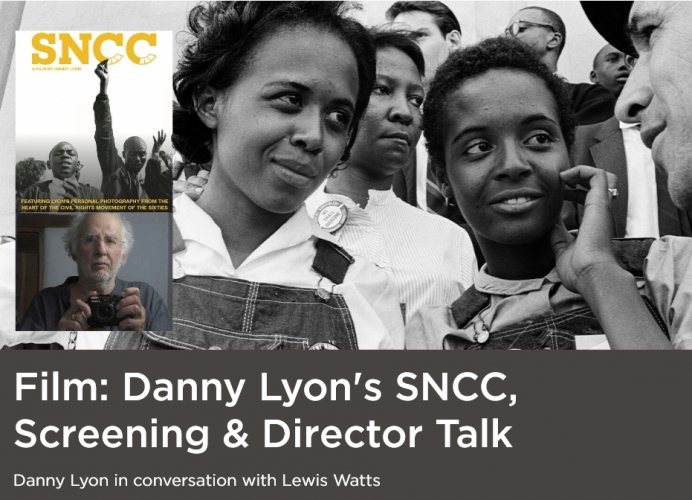 
Danny Lyon's "SNCC" (2020), brings together hundreds of never-before-seen black-and-white photographs made by Lyon during the years that he was employed as the staff photographer for the Student Nonviolent Coordinating Committee, or SNCC.

Beginning in 1962 in Cairo, Illinois when Lyon, then a University of Chicago student, met John Lewis, Freedom Rider, the film traces the story of their friendship alongside the ongoing struggle for civil rights in the United States.

The images are layered with archival audio recordings of speeches by and conversations with Lewis, Julian Bond, and Dotty Zellner, among others, as well as freedom songs that were recorded by Alan Ribback in churches and meetings in Atlanta in the 1960s and recently rediscovered by Lyon.

Danny Lyon is a photo-journalist, writer and filmmaker. His website is bleakbeauty.com. Among his many books are The Bikeriders, Conversations with the Dead and Knave of Hearts. His latest non-fiction book is Like A Thief’s Dream, PowerHouse Books.

Daniel Joseph Lyon was born in Brooklyn, New York on March 16, 1942. Roosevelt was President. World War Two was on going in Europe, Africa and Asia. Segregation was the law of the land in 13 southern states. Native Americans were not allowed to purchase alcohol in New Mexico. Most Blacks could not or did not vote in the deep south.

Lyon attended NYC public schools in Kew Gardens and Forest Hills, Queens, and in 1959 bought his first camera, an Exa SLR in Munich, Germany during a summer trip, then entered the University of Chicago, where he eventually majored in philosophy and ancient history.

In 1963 he became The Student Non-violent Coordinating Committee’s (SNCC) first photographer. Lyon’s photographs are in Museums and collections throughout the world. His most recent one man show was at the Whitney Museum of American Art in New York City. Lyon is represented by Gavin Brown Enterprises and the Etherton Gallery in Tucson, AZ.
Added to the calendar on Fri, May 28, 2021 2:48PM
Add Your Comments
Support Independent Media
We are 100% volunteer and depend on your participation to sustain our efforts!