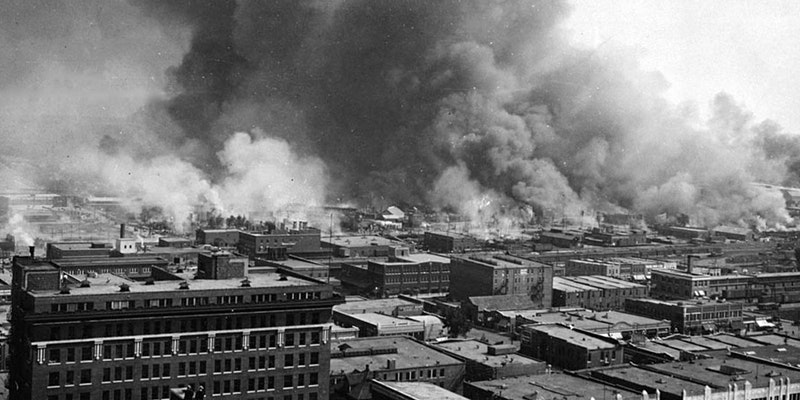 Professor Brenda E. Stevenson of UCLA joins Tulsa scholars Karlos K. Hill and Hannibal Johnson to discuss the history and significance of the massacre in Tulsa, Oklahoma in 1921.


Professor Brenda E. Stevenson moderates an online conversation with Karlos K. Hill and Hannibal Johnson, both authors and experts on the 1921 Tulsa Race Massacre, in which a white mob assaulted residents, looted, and destroyed their homes, churches, schools, and businesses in the predominantly Black neighborhood and business district of Greenwood in Tulsa, Oklahoma.

The panel discusses the history of Black migration to Oklahoma, the Jim Crow realities of the early 20th century, the facts surrounding the Tulsa massacre, and the immediate aftermath in which hundreds of Black Americans were dead, homeless, or imprisoned, their families and financial lives devastated.

BELOW: Photo of aftermath of the Tulsa Race Massacre, when on "May 31, 1921,
and in the early morning hours of June 1, several thousand white citizens and authorities violently attacked the African American Greenwood District of Tulsa, Oklahoma" (wiki).

END_OF_DOCUMENT_TOKEN_TO_BE_REPLACED
Added to the calendar on Fri, May 28, 2021 12:14PM
Add Your Comments
Support Independent Media
We are 100% volunteer and depend on your participation to sustain our efforts!