Add an Event
Newswire
Calendar
Features
Home
Donate
From the Open-Publishing Calendar
From the Open-Publishing Newswire
Indybay Feature
Related Categories: East Bay | U.S. | Police State & Prisons | Racial Justice
Two Bay Area Unions Call for Mumia Abu-Jamal's Immediate Release
by ASTU Statement reposted by the Jamal Journal
Wednesday May 26th, 2021 9:17 PM
This motion on MOVE and Mumia Abu-Jamal was adopted by both the Oakland Education Association (OEA) on May 20 and the Adult School Teachers United (ASTU), Richmond, CA on May 22. The OEA will be releasing their statement soon. 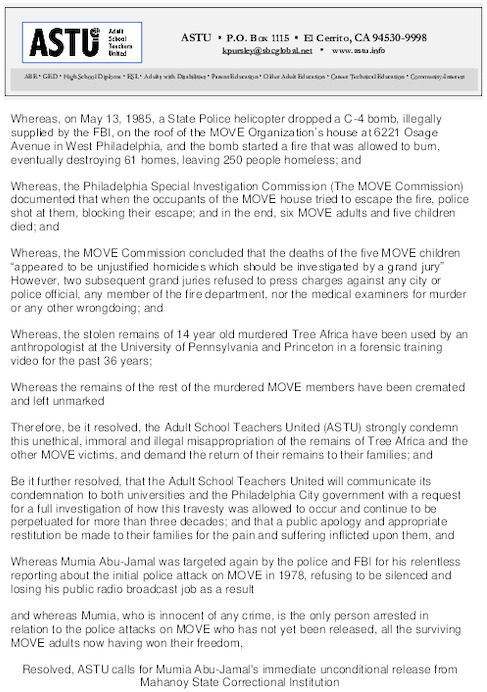 Download PDF (156.5KB)
This statement calling for Mumia Abu-Jamal's immediate and unconditional release was adopted on May 22 by the Adult School Teachers United (ASTU) in Richmond, California:

Whereas, on May 13, 1985, a State Police helicopter dropped a C-4 bomb, illegally supplied by the FBI, on the roof of the MOVE Organization’s house at 6221 Osage Avenue in West Philadelphia, and the bomb started a fire that was allowed to burn, eventually destroying 61 homes, leaving 250 people homeless; and

Whereas, the Philadelphia Special Investigation Commission (The MOVE Commission) documented that when the occupants of the MOVE house tried to escape the fire, police shot at them, blocking their escape; and in the end, six MOVE adults and five children died; and

Whereas, the MOVE Commission concluded that the deaths of the five MOVE children “appeared to be unjustified homicides which should be investigated by a grand jury” However, two subsequent grand juries refused to press charges against any city or police official, any member of the fire department, nor the medical examiners for murder or any other wrongdoing; and

Whereas, the stolen remains of 14 year old murdered Tree Africa have been used by an anthropologist at the University of Pennsylvania and Princeton in a forensic training video for the past 36 years;

Therefore, be it resolved, the Adult School Teachers United (ASTU) strongly condemn this unethical, immoral and illegal misappropriation of the remains of Tree Africa and the other MOVE victims, and demand the return of their remains to their families; and

Be it further resolved, that the Adult School Teachers United will communicate its condemnation to both universities and the Philadelphia City government with a request for a full investigation of how this travesty was allowed to occur and continue to be perpetuated for more than three decades; and that a public apology and appropriate restitution be made to their families for the pain and suffering inflicted upon them, and

Whereas Mumia Abu-Jamal was targeted again by the police and FBI for his relentless reporting about the initial police attack on MOVE in 1978, refusing to be silenced and losing his public radio broadcast job as a result

and whereas Mumia, who is innocent of any crime, is the only person arrested in relation to the police attacks on MOVE who has not yet been released, all the surviving MOVE adults now having won their freedom,

(statement ends)
http://www.jamaljournal.com
Add Your Comments
Support Independent Media
We are 100% volunteer and depend on your participation to sustain our efforts!