Add an Event
Newswire
Calendar
Features
Home
Donate
From the Open-Publishing Calendar
From the Open-Publishing Newswire
Indybay Feature
Related Categories: South Bay | Police State & Prisons | Racial Justice
Demanding Decarceration by San Jose D.A.
by Vida Linda
Wednesday May 26th, 2021 6:17 PM
We call on San Jose D.A. to free our people, free 'em all NOW! Decarceration will not wait while he builds his new brand as a "progressive prosecutor"! We are in solidarity with people inside who have been locked up for over a year during COVID, hunger striked over horrible conditions and make the demand for liberation. 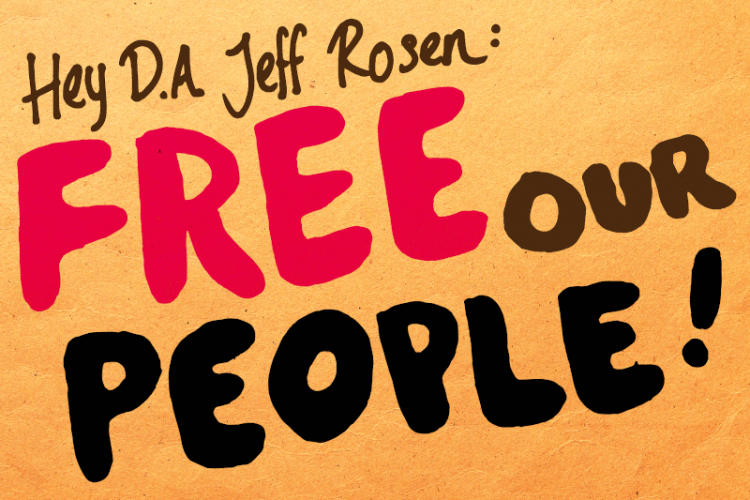 original image (800x533)
Despite recently trying to re-style himself as a “progressive prosecutor”, San Jose District Attorney Jeff Rosen remains committed to racist prosecution and mass incarceration. We say no way, and call on him to FREE OUR PEOPLE now!!

D.A. Rosen and his office have gone out of their way to oppose official state legislation that provide opportunities for re-sentencing, like Senate Bill 1391 (ending prosecution of 14- and 15-year-olds as adults) and 1437 (amends felony murder rule).

Sylvia E., a Black trans activist, could have been freed a year ago under these laws. Instead, D.A. Rosen’s opposition has forced her and many others to be locked up during the entire pandemic.

“I have been a community and LGBTQ activist since I was thirteen. I learned to be such from my parents who were both Black Panther members.

I was working as a counselor at the LGBTQ center in Hollywood in 1998, as I was leaving work I noticed a 24 year old kid who was homeless. I took the kid home and a few weeks after he started living on my living room couch.

I found out at that time that I was always sick for the past year because I had AIDS. The kid started taking care of me and at the same time developed a drug habit which led to him being responsible for a man losing his life. I showed up to the crime and called the ambulance to try to save the man’s life, the D.A. used that 911 call to place me at the scee of the crime and because I refused to allow myself to be used to put a kid in prison for life, I was also giving life.

I joined a prison reform group called Initiate Justice and its founders got SB 1391 and 1437 signed into law with a lot of help by Senator Nancy Skinner.

I was in the Santa Clara County Jail during the COVID pandemic, during which time the D.A. and judges worked together to challenge all 1391 and 1437 cases.

DA Jeff Rosen is no longer asking for the death penalty but he is is placing kids of color in prison for the rest of their life with no chance of rehabilitation. As for SB 1437 cases, San Jose has a 98% conviction rate and want to keep that by any means. I have been in prison 22 years for trying to get help for someone that needed it.”

Inmates at the Santa Clara County Jail have organized multiple hunger strikes, but more outside support and pressure is neeeded to force the D.A. to act NOW.

We call on Rosen and his cronies to drop opposition to SB 1391 and 1437, and stop opposing reforms which can set more people free. We call on his office to stop racist prosecution practices such as gang enhancements and three-strikes enforcement. And to put the heat on police violence instead.

Don’t just sign in protest, call Rosen’s office daily or weekly and write in! Tell he won't be re-elected without decarceration! The phone number of his office is (408) 299-7400.

Free Sylvia, free our people, free ‘em all!
http://chng.it/5h5NqGXMpX
Add Your Comments
Support Independent Media
We are 100% volunteer and depend on your participation to sustain our efforts!