Add an Event
Newswire
Calendar
Features
Home
Donate
From the Open-Publishing Calendar
From the Open-Publishing Newswire
Indybay Feature
Related Categories: California | Environment & Forest Defense | Health, Housing & Public Services
L.A. City Council votes to support closing SoCalGas Aliso Canyon gas storage facility
by Dan Bacher
Wednesday May 26th, 2021 6:12 PM
“Governor Gavin Newsom, stop ignoring the other health crisis right here in LA,” said Matt Pakucko, co-founder of Save Porter Ranch and 14-year resident of Porter Ranch, at the press conference. “You shut down the entire state. It’s time to shut down this health disaster. It is as real as Covid for the thousands of people that are continually sickened by this fossil fuel dinosaur.” 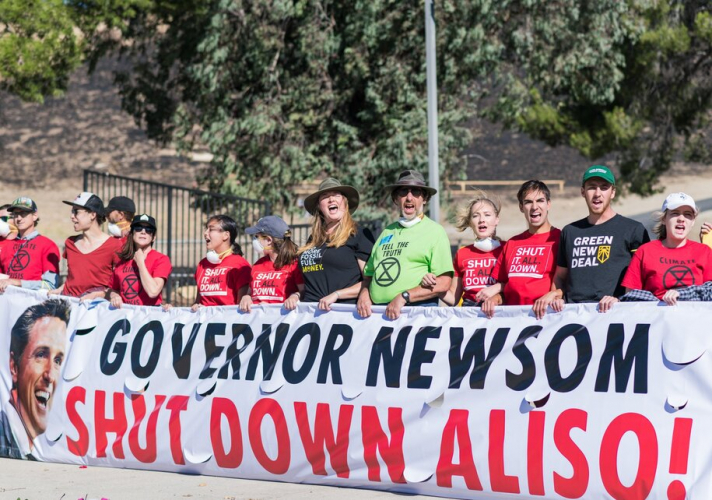 Fourteen of the fifteen council members voted in favor of the resolution.

Aliso Canyon, located in the Santa Susana Mountains near Porter Ranch in Los Angeles, was the site of the worst gas blowout in U.S. history. The blowout resulted in the displacement of thousands of residents of Porter Ranch and nearby communities and an alarming incidence of nosebleeds, headaches, nausea and cancer suffered by residents.

The facility is owned by SoCalGas, a subsidiary of Sempra Energy and a major contributor to the campaigns of California legislators, governors and other politicians, as well as to some “environmental” groups that support the energy company’s projects.

Councilman John Lee, who represents the communities impacted by the gas leak, introduced the resolution.

“Climate change is real,” Lee said during the meeting, according to the Los Angeles Daily News. “Not only is climate change real but the experience what my community went through when the Aliso Canyon facility experienced the largest blowout in the release of natural gas in American history was also a reality.”

In an email, SoCalGas representative Miguel Lopez-Najera claimed that the facility “continues to play a vital role in the resiliency of California’s energy system, supporting the decarbonization of electricity during the peaks and valleys of solar and wind supply, the Daily news reported: ”https://www.dailynews.com/2021/05/19/la-city-council-urges-state-agencies-gov-newsom-to-shut-down-aliso-canyon-gas-facility/

The vote comes after after similar resolutions from multiple cities and elected officials to shut down SoCalGas’ Playa Del Rey facility.

The local community has been fighting for the milestone for over five years and is united in demanding an end to gas, according to Food & Water Watch California Director Alexandra Nagy. Now eyes turn to Governor Gavin Newsom to fulfill his campaign promise to #ShutAlisoDown now.

“Los Angeles is working to create a real plan to 100% clean energy - it’s time that the State does its part,” said Nagy. “We need a real plan from the Governor for the closure and just transition of the gas facility.”

“Los Angeles and the state need to work together to equitably put an end to gas in all our communities, including in Sun Valley and Playa del Rey. The city and LADWP must now work with Governor Newsom to shut Aliso Canyon down,” she added.

At a press conference before the vote was taken, Food & Water Watch and members of the San Fernando Valley sickened by the massive gas explosion at Aliso Canyon over five years ago demanded the commitment of Los Angeles’ city councilmembers in shutting the toxic site down.

After hearing public comment at the meeting, the Council passed the resolution urging Governor Newsom to firm up a timeline to close the SoCalGas facility.

“Governor Gavin Newsom, stop ignoring the other health crisis right here in LA,” said Matt Pakucko, co-founder of Save Porter Ranch and 14-year resident of Porter Ranch, at the press conference. “You shut down the entire state. It’s time to shut down this health disaster. It is as real as Covid for the thousands of people that are continually sickened by this fossil fuel dinosaur.”

Pakucko noted that the Los Angeles County Board of Supervisors has yet to instruct LADPH to pursue a patient-based study examining the health impacts of the blowout on San Fernando Valley residents, despite a $25 million settlement with SoCalGas to do just that. To this day, members of the community suffer from nosebleeds, headaches, nausea and cancer.

“Shutting down Aliso Canyon won’t undo any of the deaths or illness, nor cause asthma to be cured, nor my high risk of cancer recurrence to go away,” said Kyoko Hibino, another co-founder of Save Porter Ranch. “But it will protect future generations from being exposed to toxins and carcinogens. We need clean air. This is a basic human right.”

“Five years is too long to wait for justice,” said Food & Water Watch California Director Alexandra Nagy. “But today’s action puts the communities of the San Fernando Valley one step closer to a resolution. Cities across California are transitioning away from fossil fuels and shutting down the dangerous infrastructure associated with them.”

“It’s time for Governor Newsom to fulfill his promise to the communities of the San Fernando Valley and all Californians and use his executive authority to immediately close the Aliso Canyon gas storage facility,” concluded Nagy.

She urges people to send a message to Governor Gavin Newsom and demand that he support the community and commit to a just transition process and timeline for closing the site: https://fwaction.us/shut-it-down

The gas blowout was discovered on October 23, 2015 when SoCalGas employees observed gas escaping from a well within the Aliso Canyon underground storage facility.

On January 6, 2016, Governor Jerry Brown issued a state of energy. It wasn’t until February 11, 2016 that SoCalGas reported that it had the leak under control. On February 18, 2016, state officials announced that the leak was permanently plugged, according to Wikipedia.

By comparison, the entire rest of the South Coast Air Basin combined, with a population of about 18 million people, annually emits approximately 413,000 tonnes of methane and 23,000 tonnes of ethane.

Photo courtesy of Food & Water Watch.
Add Your Comments
Support Independent Media
We are 100% volunteer and depend on your participation to sustain our efforts!