by Dan Bacher
On Friday, May 21, the California Department of Fish and Wildlife (CDFW) reported that endangered winter-run Chinook salmon are dying before they can spawn from exposure to water released from Shasta Dam that is too hot for fish to survive. 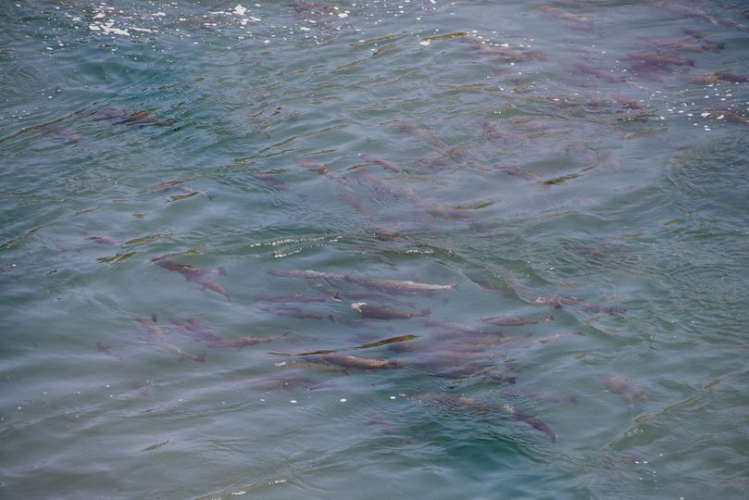 original image (809x540)
Thirty years ago, my boss, Hal Bonslett, and I went to meeting after meeting, along with other anglers and environmentalists, and wrote article after article demanding that the Sacramento winter-run Chinook salmon be listed under the federal and state Endangered Species Acts.

The post-Shasta Dam spawning escapement of the salmon that once spawned in the McCloud River had declined from 117,000 adults in 1969 to just 200 by 1991. I even wrote a song, the Ballad of the Winter Chinook, about the collapse of this once-abundant species of salmon.

Finally, the fish was listed under both state and state law. Yet, three decades later, the salmon have still not recovered and winter Chinooks are now dying before spawning below Keswick Dam.

The listing has failed to restore the salmon run because of massive water exports from the Delta most years and the failure of the state and federal governments to implement measures to reintroduce the original run of winter run fish, now found in New Zealand, to reach their ancestral spawning grounds on the McCloud, as proposed by the Winnemem Wintu Tribe.

On Friday, May 21, the California Department of Fish and Wildlife (CDFW) reported that endangered winter-run Chinook salmon, after decades of so-called “protection,” are dying before they can spawn, from exposure to water released from Shasta Dam that is too hot for fish to survive. Fish that haven't succumbed to the high temperatures yet are covered with fungus and are struggling for oxygen. The report states:

“5-21-21. Carcass counts [along the Sacramento River between Keswick Dam and Balls Ferry Brg] have increased although a large number of these observations have been pre-spawn mortalities. Crews continue to observe live fish that are exhibiting unusual swimming behavior, fish covered with fungus patches, and unspawned fish drifting downstream while still alive but moribund and presumed to die shortly after observation. To date of the 66 carcasses observed 25 have been unspawned (16 of these were females). Water temperatures have cooled in the upper river earlier this week as power bypass operations have been reduced and much cooler weather has prevailed over the past days."

Why did this happen? “It was because Bureau of Reclamation released water that was too hot,” said Mike Conroy, Executive Director of the Pacific Federations of Fishermen’s Associations (PCFFA). “When Reclamation did their power bypass operations earlier this month, the National Marine Fisheries Service (NMFS) and CDFW told them to keep water temperatures below 60 degrees at Clear Creek.”

“Instead, Reclamation let water temperatures exceed 61.5 degrees out of the dam, which meant even hotter water downstream. State and federal agency staff documented a huge mass of endangered salmon at the base of Keswick Dam gasping for air at the surface, desperately looking for cold water and dissolved oxygen. Now they’re seeing significant pre-spawn mortality and fungus covered salmon,” reported Conroy.

According to the San Francisco Baykeeper, many of these adult fish below Keswick Dam are likely to die soon. And, based on current reservoir release plans, nearly all of the winter-run Chinook Salmon and fall-run Chinook Salmon spawned this summer will die from exposure to high water temperatures, either directly or indirectly.

Baykeeper Senior Scientist, Jon Rosenfield, said: "Right now, Shasta Reservoir still has enough cold water to protect the winter and fall runs of Chinook Salmon from high water temperatures. But instead, the Bureau of Reclamation is planning to deliver that water to Central Valley agribusiness. And the State Water Board, which has the authority and obligation to prevent the Bureau from squandering the cold water, is failing (yet again) to act meaningfully to stop this disaster."

On the May 4th Day of Action organized by Save California Salmon, California Tribes, fishermen, and environmental groups called on Governor Gavin Newsom to direct state agencies to take action to stop fish kills of salmon runs on both the Sacramento and Klamath-Trinity River watersheds that are nearing extinction and to protect water quality.

“California is a salmon state and what happens to the salmon happens to us,“ explained Chief Caleen Sisk, Spiritual Leader of the Winnemem Wintu Tribe. “What happens to the people if salmon runs are nearing extinction, and if the rivers that feed cities water supplies and reservoirs are dangerously low and full of algae? Not only has Newsom and the state not taken actions to protect reservoir’s storage or rivers flows in the North State, last week he actually tried to say that actions like Sites Reservoir and voluntary agreements for agricultural water withdrawals are drought measures and would end the water wars. These proposals benefit industrial agriculture and exporters, which use 80 percent of the state’s water, not the North state or Tribal communities. Salmon benefit us.”

The poor water management by the Department of Water Resources and the Bureau of Reclamation that has excerbated drought water conditions, resulting in the unfolding disaster below Keswick Dam, is revealed in my analysis of water exports out of the Delta for the past decade.

In 8 out of the past 10 years, the combined water exports from the state and federal water projects have exceeded the 3 million acre feet annual export figure that many believe to be the maximum amount of water that can be exported from the Delta without destroying the ecosystem and harming fish species.

In every water year except two, 2014 and 2015, the state and federal projects exported well over 3 million acre feet of water from the Delta.

The 3 million acre feet cap of water exports in all years is a key recommendation of the Environmental Water Caucus (EWC) updated solutions plan titled “A Sustainable Water Plan for California.”

Due to the projected poor water conditions in the Sacramento and its tributaries this year, all of the juvenile chinook salmon (smolts) from state fish hatcheries are getting truck rides to saltwater this spring to increase their survival.

Over 16.8 million young chinook salmon from four Central Valley hatcheries — the Feather River, Nimbus, Mokelumne and Merced facilities — will have been trucked to release sites around San Pablo and San Francisco bays and in Half Moon and Monterey bays by early June, according to the CDFW.

“If you don’t conserve enough water to maintain carryover storage to enable successful spawning and outmigration of salmon in a drought, then the CDFW has to truck the fish downriver to the bay so that fish are able to survive,” said Bill Jennings, chairman and executive director of the California Sportfishing Protection Alliance (CSPA).

USDA predicts a record of 1,330,000 bearing acres in California almonds this year

The massive water exports out of the Delta take place as the acreage for almonds, a water-intensive crop, has increased dramatically over the past ten years. The U.S. Department of Agriculture (USDA) National Agricultural Statistics Service (NASS) on May 12 released the 2021 California Almond Subjective Forecast that predicts a 3 percent increase in the California almond crop during this drought year, with a record bearing acreage of 1,330,000 acres.

And who are the biggest and most powerful almond growers in California? Yes you guessed it — Linda and Stewart Resnick, the owners of The Wonderful Company. The billionaire power couple have donated $250,000 to Gavin Newson’s campaign against the recall this year.

As winter Chinook are dying before spawning and almond acreage keeps expanding, Doug Obegi of NRDC informs us that on Friday, May 21, the State Water Resources Control Board appeared to tentatively approve a temperature management plan for Shasta Dam that “sacrifices salmon and fishing jobs for agribusiness profits this year, violates water quality standards, and leaves California woefully unprepared if next year is also dry” - and will apparently allow the federal and state governments to allocate more than 4.5 million acre feet of water in 2021 to their contractors.

“While this plan is terrible for salmon and the thousands of jobs and communities that depend on their health, it appears to allow Reclamation and DWR to allocate more than 4.5 million acre feet of water this year to their contractors, largely agribusinesses in the Sacramento and San Joaquin Valleys, rather than making more politically painful cuts,” Obegi wrote on nrdc.org.

Unfortunately, the Sacramento River is not the only river system where salmon are dying because of the Bureau of Reclamation’s poor water management policies. On May 13, the Yurok Tribe reported that a widespread and catastrophic juvenile fish kill is taking place on the Klamath River, a day after the US Bureau of Reclamation announced that it would not release water to prevent a juvenile salmon kill on the river, as requested by the Tribe.

“Right now, the Klamath River is full of dead and dying fish on the Yurok Reservation,” said Frankie Myers, the Yurok Tribe’s Vice Chairman. “This disease will kill most of the baby salmon in the Klamath, which will impact fish runs for many years to come. For salmon people, a juvenile fish kill is an absolute worst-case scenario.”