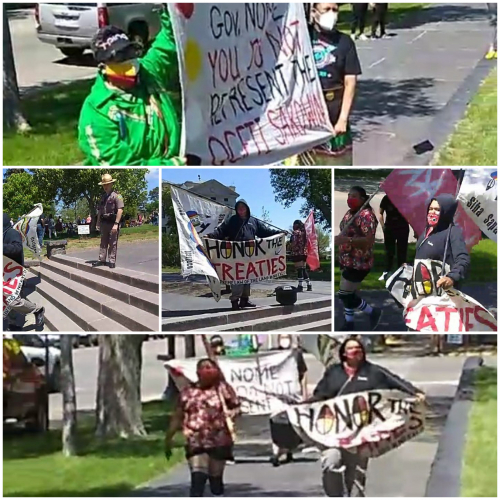 Lakotas protested South Dakota Gov. Kristi Noem's round dance at the Capitol today, calling her out for "killing grandmothers and grandfathers," after Noem sought to dismantle tribal checkpoints and virus protection efforts.

Over a loud speaker, Lakotas blasted, "Kristi Noem is no friend of Native People." As state police pushed them back, Lakotas called out, "You're dancing for racism."

Noem fought tribal police checkpoints, and promoted the Sturgis bike rally at a time when people were dying during the pandemic.

Noem is now battling Lakotas to have her fireworks party in the Black Hills. Today 2KC Media said she is responsible for cultural genocide.

Lakotas pointed out her attempts to further militarize police to fight lawful protests, and the white supremacist blanket she attempts to cast over South Dakota.

She is in a lawsuit against the Biden administration to bring back KXL, enemy of the tribe. She has created riot boosting laws and is building a new national guard center to handle any opposition.

She is currently suing Deb Haaland for not allowing her fireworks in the black hills, He Sapa. The people made it clear last year, but she didn't listen, and pulled the national guard out.

She is also involved in a state lawsuit against the people's decision on recreational marijuana.

While she complains about 50 permanent jobs lost with KXL, she is denying the opportunity for thousands of green, permanent jobs.

While she claimed, "We don't need handouts," she handed out $100,000 to her family members from Cares Act money. She has used taxpayer money to campaign all over for trump.

She has passed legislation against the two spirit community.
She did nothing to stop the spread of covid and brought a lot in by allowing Sturgis.

Native populations were proportionately hit worse by these descisions. When checkpoints were set up for tribal safety she tried her best to shut them down.

She is also backing legislation to ensure history classes in school to teach about how her America was instead of the truth.

She tries to hide these acts of cultural genocide behind this phony powwow.

We are armed with the truth and prayer!
Wake up America!"