Add an Event
Newswire
Calendar
Features
Home
Donate
From the Open-Publishing Calendar
From the Open-Publishing Newswire
Indybay Feature
Related Categories: East Bay | Health, Housing & Public Services | Police State & Prisons | Racial Justice
Community Coalition Slams Proposed City Budget: “This is NOT a re-imagined budget”
by Berkeley Copwatch
Thursday May 20th, 2021 2:12 PM
A growing coalition of Berkeley community groups took to the steps of City Hall on Wednesday, May 19th to express their deep concerns that the City Manager’s proposed budget does not do enough to redirect funds from the police department towards emergency mental health response and alternatives methods for dealing with non-criminal calls for assistance. 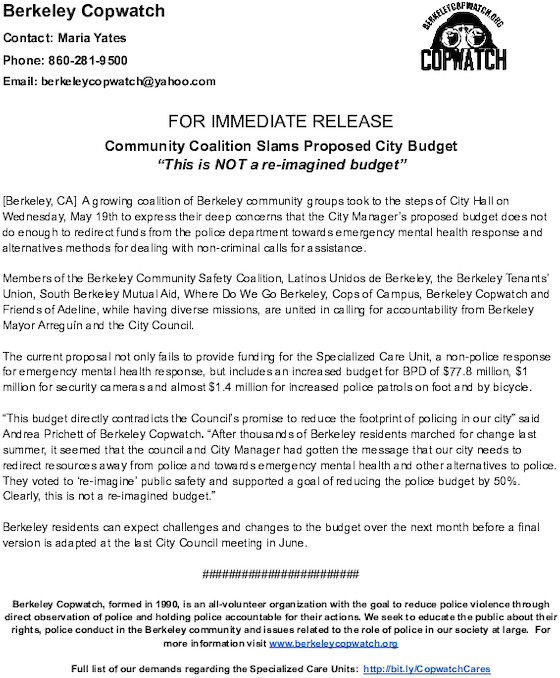 
Members of the Berkeley Community Safety Coalition, Latinos Unidos de Berkeley, the Berkeley Tenants’ Union, South Berkeley Mutual Aid, Where Do We Go Berkeley, Cops of Campus, Berkeley Copwatch and Friends of Adeline, while having diverse missions, are united in calling for accountability from Berkeley Mayor Arreguín and the City Council.

The current proposal not only fails to provide funding for the Specialized Care Unit, a non-police response for emergency mental health response often referred to as "Care Not Cops", but includes an increased budget for BPD of $77.8 million, $1 million for security cameras and almost $1.4 million for increased police patrols on foot and by bicycle.

“This budget directly contradicts the Council’s promise to reduce the footprint of policing in our city” said Andrea Prichett of Berkeley Copwatch. “After thousands of Berkeley residents marched for change last summer, it seemed that the council and City Manager had gotten the message that our city needs to redirect resources away from police and towards emergency mental health and other alternatives to police. They voted to ‘re-imagine’ public safety and supported a goal of reducing the police budget by 50%. Clearly, this is not a re-imagined budget.”

Berkeley residents can expect challenges and changes to the budget over the next month before a final version is adapted at the last City Council meeting in June.

Berkeley Copwatch, formed in 1990, is an all-volunteer organization with the goal to reduce police violence through direct observation of police and holding police accountable for their actions. We seek to educate the public about their rights, police conduct in the Berkeley community and issues related to the role of police in our society at large. For more information visit http://www.berkeleycopwatch.org

Full list of our demands regarding the Specialized Care Units: http://bit.ly/CopwatchCares
http://www.berkeleycopwatch.org
Add Your Comments
Support Independent Media
We are 100% volunteer and depend on your participation to sustain our efforts!