Add an Event
Newswire
Calendar
Features
Home
Donate
From the Open-Publishing Calendar
From the Open-Publishing Newswire
Indybay Feature
Related Categories: California | Central Valley | Santa Cruz Indymedia | Environment & Forest Defense | Health, Housing & Public Services
Pesticides on your food in California: An illegal helping once a week
by Safe Ag Safe Schools (hektor [at] pesticidereform.org)
Thursday May 20th, 2021 7:35 AM
Illegal levels of pesticides were detected on more than 1 in 25 pieces of produce sampled in California, according to recently released data by the California Department of Pesticide Regulation (DPR). The rate of illegal samples, 4% of the 3,274 fruit and vegetables tested in 2019, is consistent with the most recent 5-year average (2015-2019). 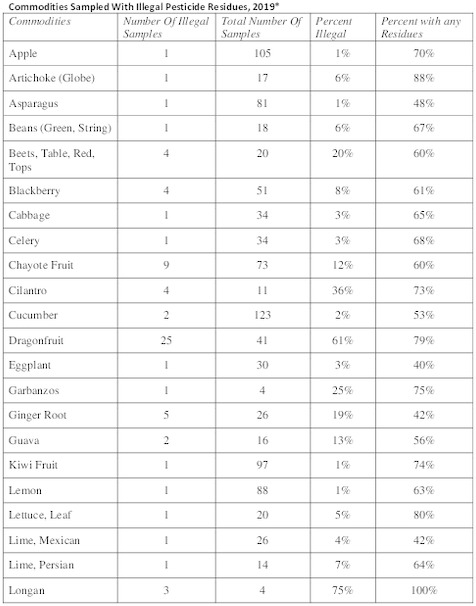 Sacramento: Illegal levels of pesticides were detected on more than 1 in 25 pieces of produce sampled in California, according to recently released data by the California Department of Pesticide Regulation (DPR). The rate of illegal samples, 4% of the 3,274 fruit and vegetables tested in 2019, is consistent with the most recent 5-year average (2015-2019). Many pesticides are hazardous to human health, with some classified as carcinogens and others being reproductive and developmental toxicants, including those that are harmful to the brain and nervous system.

Illegal levels – those that exceed pesticide residue tolerances set by the U.S. Environmental Protection Agency (U.S. EPA) – were found in 137 of the 3,274 produce samples from 500 California businesses in 2019, including “wholesale and retail outlets, distribution centers, and roadside and farmers markets.”

The annual study is part of the California Pesticide Residue Monitoring Program, which “sample[s] a wide range of fruits and vegetables collected at sites where produce is sold, packed, or distributed.” DPR reports that the “sampling is not designed to be statistically representative of the overall rate of residue levels” but rather selected by factors including:

Produce treated with pesticides listed as carcinogens or reproductive toxins.

Produce which has a history of detected illegal pesticide residues.”


Although not a random scientific sample, DPR has used the data to make generalizations about the level of pesticide residues on food, issuing an April 29 press release with the headline “State Monitoring Confirms Low or No Pesticide Residues in Most Fruits and Vegetables.”

But 4% of produce with illegal levels of pesticide residue is not a reassuring rate to some Californians, since that would mean consuming contaminated produce more than once a week on average.

“If DPR thinks 1 in 25 pieces of produce with illegal levels of pesticides on them is ‘low’, that is truly alarming,” said Héktor Calderón, coordinator of the Monterey Bay area-based coalition Safe Ag Safe Schools. “The USDA [United States Department of Agriculture] recommends five helpings of fruits and vegetables every day, right? The math is pretty simple: five days of five helpings of produce a day gets me to 25 helpings. So, on average, every 5 days I’m consuming produce with illegal pesticides. That comes out to 73 helpings a year with illegal pesticides. That’s not a ‘low’ residue rate.”

In the Central Valley, Byanka Santoyo of the Center on Race, Poverty, and the Environment (CRPE), expressed concern about shopping for healthy food for her family: “What’s a mother to do, if we have to worry about illegal pesticide residues on every couple of dozen pieces of fruit at the grocery store? I guess we need to find the organic section.”

U.S. EPA standards tend to be lax compared to other countries with large agricultural economies, so consumers should be aware that a legal sample in California may be illegal in other places. In a recent study in Environmental Health comparing pesticide regulations amongst agricultural powers, the researchers found:

The percentage of the samples that DPR detected with any pesticide residue was 61% -- nearly two-thirds of all produce tested. The last column in the table below, “Percent with any Residues”, was added to the table from DPR’s report, using data directly from DPR’s study.

http://www.safeagsafeschools.org
Add Your Comments
Support Independent Media
We are 100% volunteer and depend on your participation to sustain our efforts!