Add an Event
Newswire
Calendar
Features
Home
Donate
From the Open-Publishing Calendar
From the Open-Publishing Newswire
Indybay Feature
Related Categories: California | Global Justice & Anti-Capitalism
Ban Imposter Pennie Opal Plant from the Civil Rights Movement
by Quanah Brightman
Monday May 17th, 2021 12:47 PM
We feel it Necessary to Make You and All Parties aware of a Imposter Wannabee Named Pennie Opal Plant. She is a Fraud Wannabee Indian Women who tries to Pass Herself off as a Tribal Citizen, Yet She is in fact a Imposter Guilty of Cultural Appropriation. 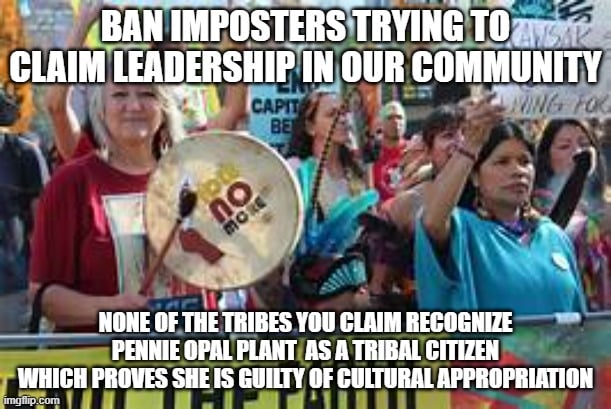 Tribal Law Reads as Such..."

#TribalEnrollmentMatters
Beware of Fraudulent Cultural Appropriation in Our Community. Tribal enrollment requirements preserve the unique character and traditions of each tribe. The tribes establish membership criteria based on shared customs, traditions, language and tribal blood.
Self-Identifying Persons Do Not Qualify as Representation of Illegitimate Tribal Leaders
https://www.doi.gov/tribes/enrollment


She is also Associated with Convicted Rapists and Murders of Indigenous Women known as The American Indian Movement.

REMEMBERING ANNIE MAE, WHO SHE WAS AND WHAT SHE STOOD FOR.....

To know Annie Mae is to understand and honor the injustices she suffered in life and in death. To this we dedicate this page.

Annie Mae Pictou Aquash, a member of the Mi'kmaq Nation from Nova Scotia, Canada, was more then just a Native rights activist during the 1970's. She was a women, mother of two beautiful girls, daughter, wife, sister, and friend who was kidnapped, raped and then executed. She was the true meaning of what a Native warrior stood for. She fought for all that she believed in… women's rights, our children, our elders, our land, our freedom of religion, our treaty rights and so much more.

Annie Mae joined the American Indian Movement (AIM) for just those reasons. She believed their intentions were honorable and just, that they stood for everything she stood for. She traveled in the early 1970s' to South Dakota to participate in taking a stand in defending the rights of Indigenous people who couldn't help themselves. But the deeper she got involved with AIM and the more she learned the truth, she began to question the integrity of the group and how women and grassroots people were being treated.

Her dedication and ability to stand strong in the face of adversity eventually would lead to her execution. Because she questioned the actions and morality of a few individuals it was decided that she no longer needed to have a voice and did not deserve the right to live. In the last few days of her life Annie Mae suffered indignities no human being or woman should ever have to suffer. Yet, even until the end she fought for all that she believed in, though sadly some of those that she used to believed in, didn't believe in her and as a result to protect themselves, they took her life. They kidnapped her… they raped her… they shot her execution style in the back of the head, as she prayed for her children, then they left her to die in the frozen plains of South Dakota.

Annie Mae's murderers have walked free for over 3 decades and her daughters still wait for justice… and while those responsible may have taken her life, Annie Mae's spirit carries on, like the warrior she was and still is.

December 1, 2003: John Graham, a.k.a. John Boy Patton is arrested and charged with murder.

February 6, 2004: Looking Cloud was tried and convicted by a jury in Rapid City, South Dakota of being Party to First Degree Pre-Meditated Murder.

December 2004: Graham was brought before a B.C. supreme court for an extradition trial.

February 21, 2005: Bennett ruled that John Graham should be extradited to the United States to stand trial in his involvement in the murder of Annie Mae Pictou Aquash. Graham then appeals the extradition.

December 6, 2007: Graham's appeal to the Canadian Supreme Court is formally turned down. John Graham has exhausted his legal remedies and is extradited to the United States the same morning.

December 7, 2007: Graham is presented to a federal magistrate in Rapid City, South Dakota and pleads not guilty to Murder in the 1st Degree.

March 2008: Graham’s asked for another three months to prepare because the evidence includes 112 audio tapes and about 5,000 documents.

August, 2008: A 6th Grand Jury reviews evidence and hears from witnesses/suspects in the Aquash case.

August 26, 2008: Vine Richard (Dick) Marshall is arraigned and charged with aiding and abetting 1st degree murder after a federal grand jury indicts him on August 20, 2008.

May, 2009: Federal murder charges against John Graham are dropped for a second time based on motions by his defense attorney that Graham is not an "American Indian" as defined by U.S. law. Dismissal of charges are appealed to District Federal Court.

July, 2009: A federal appeals court during late July upheld the dismissal of a key charge against John Graham accused of the 1975 slaying of Annie Mae Aquash, a leader and member of the American Indian Movement, opening the possibility he could be tried in state court.

September, 2009: Federal prosecutors ask for another delay in the trial of John Graham and Richard Marshall. Prosecutors say they've asked for a rehearing on the dismissal of one of the three counts against Graham and can't proceed on the two remaining charges until that appeal is resolved.

October 6, 2009: Thelma Rios arraigned on one count of felony murder in relation to kidnapping and one count of premeditated murder in the death of Annie Mae Aquash.

November 2010: Thelma Rios, 65, was charged in state court with one count each of felony murder in relation to kidnapping, and premeditated murder. She pleaded guilty to one count of accessory to kidnapping and was sentenced to five years in prison, which was suspended by John Delaney.

December 10, 2010: John Graham was acquitted of premeditated murder, but found guilty of felony murder in connection with a kidnapping, which carries a mandatory sentence of life in prison.

January 24, 2011: John Graham, convicted in the 1975 slaying of Annie Mae Aquash, will serve life in prison, a decided, closing a major chapter in an investigation that’s taken more than three decades.
https://actionnetwork.org/petitions/ban-im...
Add Your Comments
Support Independent Media
We are 100% volunteer and depend on your participation to sustain our efforts!