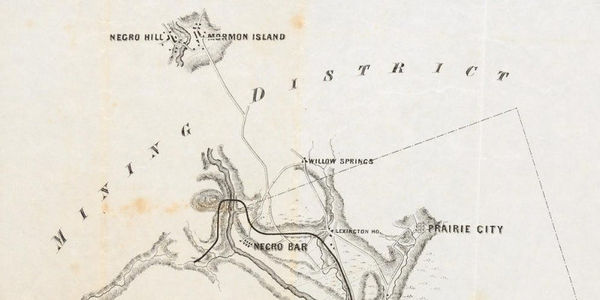 SACRAMENTO – As the country continues to confront a history of racial injustice, deeply rooted in the legacy of slavery and systemic racism, today, Governor Gavin Newsom appointed five individuals to serve on the newly formed Task Force to Study and Develop Reparation Proposals for African Americans.

The formation of this task force was made possible by the Governor’s signing of AB 3121, authored by then-Assemblymember Shirley Weber (D-San Diego), which established a nine-member task force to inform Californians about slavery and explore ways the state might provide reparations.

“California is leading the nation, in a bipartisan way, on the issue of reparations and racial justice, which is a discussion that is long overdue and deserves our utmost attention,” said Governor Newsom.

“Last year, I signed into law a number of key bills focused on leveling the playing field in our society and ensuring that everyone has a fair shot at achieving the California dream. Today’s appointment of individuals with an expansive breadth of knowledge, experiences and understanding of issues impacting the African American community is the next step in our commitment as a state to build a California for all.”

The five individuals selected by the Governor to serve on this task force represent diverse backgrounds and meet the statutes required by law, which include choosing one candidate from the field of academia with expertise in civil rights and an additional two appointees selected from major civil society and reparations organizations that have historically championed the cause of reparatory justice.

Other key factors considered for committee candidates included a background in economics and community development, health and psychology, law and criminal justice, faith-based and community activism, and an expertise in the historic achievement of reparatory justice.

After months of interviews and careful consideration, the Governor made the following appointments:

Cheryl N. Grills, Ph.D., 62, of Inglewood, has been appointed to the Reparations Task Force. Grills was recently chosen to serve as President’s Professor at Loyola Marymount University, a designation bestowed upon LMU’s most distinguished faculty who already hold the rank of tenured full professor and are acknowledged leaders in their respective fields, having achieved national and international recognition of their work. In addition to her community-based research, her work focuses on racial stress and trauma, implicit bias and community healing focused on the needs of people of African ancestry. Grills has been a Professor of Psychology and Director of Psychology of the Applied Research Center at Loyola Marymount University since 1987. She is Commissioner and Vice Chair of the LA County Sybil Brand Commission, where she has served since 2011. She was President of The Association of Black Psychologists from 2011 to 2013. She is the leader of the Global Emotional Emancipation Circles Training Team, where she has served since 2009. She is current lead on a national Impact of COVID-19 on Communities of Color Needs Assessment for several Congressional Caucuses and national civil rights organizations. Grills was leader of the Emotional Emancipation (EE) Circle process under the Community Healing Network in 2009. Grills earned a Doctor of Philosophy degree in Clinical Psychology from the University of California, Los Angeles and a Bachelor’s degree from Yale University with a double major in Psychology and African American Studies. This position does not require Senate confirmation and there is per diem compensation for not more than ten meetings. Grills is a Democrat.

Amos C. Brown, Th.D., 80, of San Francisco, has been appointed to the Reparations Task Force. Brown is a renowned civil rights leader who studied under Dr. Martin Luther King, Jr. and was later arrested with King at a lunch counter sit-in in 1961 and joined the Freedom Riders who protested segregation in the South. Brown was awarded the Martin Luther King, Jr. Ministerial Award for outstanding leadership and contributions to the Black Church in America and was also inducted into the International Hall of Fame at the King International Chapel at Morehouse College. Brown has been a Pastor at the Third Baptist Church of San Francisco since 1976. He was a Pastor at Pilgrim Baptist Church from 1970 to 1976 and at Saint Paul’s Baptist Church from 1966 to 1970. Brown is President of the San Francisco Branch and a Member of the Board of Directors of the NAACP. He earned a Doctor of Theology degree from United Theological Seminary and a Master of Theology degree from Crozer Theological Seminary. This position does not require Senate confirmation and there is per diem compensation for not more than ten meetings. Brown is a Democrat.

Lisa Holder, J.D., 49, of Los Angeles, has been appointed to the Reparations Task Force. Holder has dedicated her career to racial and social justice and systems change. Holder is a nationally recognized, award-winning trial attorney who has been identified as a “Super Lawyer” by Los Angeles Magazine for four consecutive years. Holder has been Of Counsel at Equal Justice Society since 2016 and Principal Attorney at the Law Office of Lisa Holder since 2010. She was Lecturer in Law and Adjunct Professor at UCLA School of Law from 2017 to 2019. Holder was Adjunct Professor at Occidental College from 2012 to 2016 and Associate Attorney at Hadsell Stormer Keeny Richardson from 2005 to 2009. Holder was Deputy Alternate Public Defender at the Office of the Los Angeles County Alternate Public Defender from 2001 to 2005. She was awarded a Soros Justice Fellowship through the Open Society Foundation in 2001. She was an Investigator and Analyst at the Neighborhood Defender Service of Harlem from 1995 to 1997. Holder is a Steering Committee Member of the Equal Opportunity 4 All Coalition and Vice Chair of the Child Care Law Center. She earned a Juris Doctor degree from the New York University School of Law and a Bachelor’s degree from Wesleyan University. This position does not require Senate confirmation and there is per diem compensation for not more than ten meetings. Holder is a Democrat.

Donald K. Tamaki, J.D., 69, of Piedmont, has been appointed to the Reparations Task Force. Tamaki is known for his historic work serving on the pro bono legal team that reopened the landmark Supreme Court case of Korematsu v. United States, overturning Fred Korematsu’s conviction for refusing incarceration during the mass roundup and internment of Japanese Americans during World War II and providing a key legal foundation in the decades long Japanese American Redress Movement. He is also Co-Founder of StopRepeatingHistory.Org, a campaign focused on drawing parallels between the incarceration of Japanese Americans during World War II and the targeting of minority groups based on race or religion. The campaign’s current work is focused on the intersectionality of the Japanese American Redress Movement and that of African-American Reparations, with an emphasis on creating solidarity and promoting public awareness on the importance of advancing reparations for African-Americans. Tamaki has been Senior Counsel at Minami Tamaki LLP since 2020, where he also served as Managing Partner from 2006 to 2020 and was Partner from 1987 to 2020. He was Owner of the Law Offices of Donald K. Tamaki from 1984 to 1987. Tamaki was Executive Director at the Asian Law Caucus – Advancing Justice from 1980 to 1984. He was a Reginald Heber Smith Staff Attorney at Community Legal Services of San Jose from 1976 to 1979 and Co-Founder of the Asian Law Alliance. Tamaki is a Member of the Bar Association of San Francisco and Asian American Bar Association of the Bay Area. He received the State Bar of California Loren Miller Award in 1987 and the American Bar Association’s Spirit of Excellence Award in 2020. He earned a Juris Doctor degree from the University of California, Berkeley School of Law. This position does not require Senate confirmation and there is per diem compensation for not more than ten meetings. Tamaki is a Democrat.

Jovan S. Lewis, Ph.D., 38, of Berkeley, has been appointed to the Reparations Task Force. Lewis is an Economic Anthropologist and Geographer who researches reparations, the political economy of inequality and race in the United States and the Caribbean. His current work focuses on the history and contemporary circumstances of the historic Black community of Greenwood in Tulsa, Oklahoma, and the consequences of the 1921 Tulsa race massacre. Lewis is an Associate Professor and the incoming Chair of the Department of Geography at the University of California, Berkeley, where he has taught since 2015. At Berkeley, he has also been Co-Chair of the Economic Disparities research cluster at the Othering and Belonging Institute and Faculty Affiliate in African American Studies since 2015. He earned Doctor of Philosophy and Master of Science degrees in Economic Anthropology from the London School of Economics and a Master of Arts degree in Administration from the University of Miami. This position does not require Senate confirmation and there is per diem compensation for not more than ten meetings. Lewis is a Democrat.

The Task Force will select their own chair and vice chair and their work will be staffed by the Attorney General’s Office. Members will meet over the next year and conclude their work with a written report on their findings, along with recommendations which will be provided to the Legislature.

Today’s action builds on the Newsom Administration’s work to acknowledge historic wrongs and combat structural racism and bias in our institutions. In March of 2019, the Governor issued a moratorium on the death penalty, which is unfairly applied to people of color, people with mental disabilities and people who cannot afford costly legal representation. Governor Newsom also took action to secure safe drinking water for the 1 million Californians in underserved communities who lacked access to safe water. He took the historic step of formally apologizing to California Native Americans for the exploitation and violence our predecessors inflicted upon them, and announced the Administration’s support for tribal access to co-manage and acquire ancestral lands. Governor Newsom has also taken action to combat decades-long economic inequality by expanding the California Earned Income Tax Credit to millions, including undocumented Californians.