Add an Event
Newswire
Calendar
Features
Home
Donate
From the Open-Publishing Calendar
From the Open-Publishing Newswire
Indybay Feature
Related Categories: Santa Cruz Indymedia | Health, Housing & Public Services | Police State & Prisons
A Victory for Chaos and Cruelty - The Logic of Internment Advanced Against the Unhoused
by Keith McHenry
Thursday May 13th, 2021 12:55 PM
We can only hope that the celluloid avatars at the Santa Cruz City Council are clueless, otherwise their “Camping Services and Standards Ordinance” is just naked sadism. 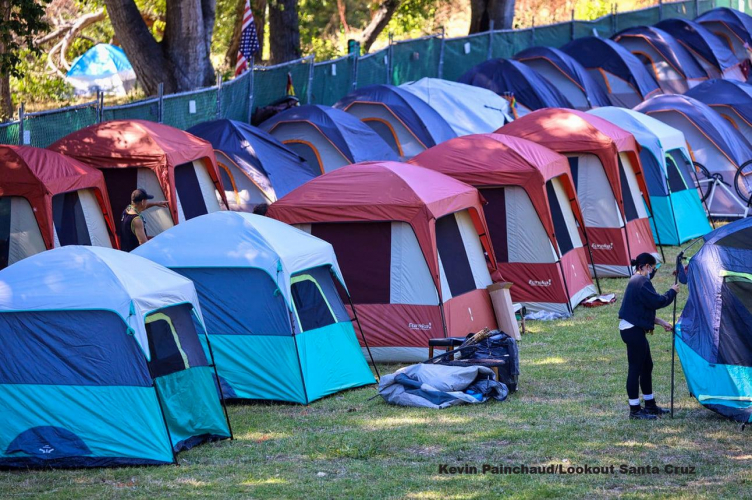 original image (1292x858)
Imagine a fleet of city trucks and vans scouring the city every morning collecting the tents and other survival gear from hundreds of unhoused people then returning that evening after 8:00 pm to deliver everyone’s equipment so they can get a night’s rest.

That is just one of the many dehumanizing insults of the “Camping Services and Standards Ordinance” passed on May 11, 2021, in Santa Cruz, California.

Another insult features the exciting prospect of a "safe sleeping site" for 150 people when it is likely that many additional people will be finding themselves homeless on the streets of Santa Cruz every month for the foreseeable future.

“As a grant writer, I know what it takes to be competitive as a community. Funders want to see communities that are in action. Funders want to see that we are capable of moving forward with solutions, and so this is a step in that direction,” Councilmember Shebreh Kalantari-Johnson said. “And so when the state sees that we have made progress, and we have stood up 150 safe sleeping sites in a matter of months, they’re going to want to fund us because they’re going to want to see our efforts progress and expand.”

Then consider what happens with all this promised funding announced by Governor Gavin Newsom in his rule by headline desperation that seems to be exciting councilperson Kalantari-Johnson.

The Jeff Bezos “The Day 1 Families Fund” donated $2.5 million to Housing Matters in 2020 and a couple of months later the 30-bed homeless shelter at Housing Matters on River Street closed due to lack of funding. Social workers at the shelter struggled to find new locations for the dispossessed. Consider the success of Operation Roomkey. San Francisco is paying $16.1 million to shelter homeless people in 262 tents placed in empty lots around the city. They could have placed those people at the Fairmont for that price and that is really the solution here in Santa Cruz. Start by filling the Hampton Inn on Mission Street.

By dehumanizing those who cannot afford housing city officials have guaranteed that there will not be a single location for even one of their 150 person safe sleeping sites let alone the fifteen such cruel insults to human dignity that would be required to accommodate all those outside.

The May 7th Santa Cruz Sentinel article “Eviction of Highway 1, 9 unhoused residents to start Monday” quotes city and county officials as saying that the city shelter programs don’t have a great deal of capacity”.

According to Jason Hoppin, Santa Cruz County communications manager, there are currently more than 800 people staying in various shelter types. That includes COVID-19 state-funded Project Roomkey, where motels are rented out to unhoused people who are at greater risk of the virus, as well as semi-congregate shelters at Veteran’s Halls, and the National Guard Armory shelter.

“We don’t have really a great deal of capacity in that system, and we still have hundreds and hundreds of people on waiting lists to get in to that system,” Hoppin said.

Those accepted into various shelter programs are prioritized based on medical need, Hoppin explained.

“There’s not enough shelter in the county, and the city is doing the very best we can with the resources we have available, within its purview — like the Benchlands, where we have 120 people camping,” City Communications Manager Elizabeth Smith said.”

I visited the Benchlands during the afternoon of the May 11th City Council meeting. I found a friend of mine standing under the pedestrian bridge looking exhausted still grasping her neatly packed garden wagon. “How are you doing?” I asked. “Not too good” she responded. She had lost much of her items during the Highway 1 sweep and was seeking someplace to set up her tent. I counted 184 tents already pitch on the Benchlands at 3:00 pm that day. Those numbers are sure to grow well beyond the 122 spaces ordered by Magistrate Judge Susan Van Keulen.

A city that can embrace the idea of Seabright Strong is rushing ever closer to a time when the logic of internment becomes reality.
https://anarchistcook.wordpress.com/2021/0...
Add Your Comments
LATEST COMMENTS ABOUT THIS ARTICLE
Listed below are the latest comments about this post.
These comments are submitted anonymously by website visitors.