Add an Event
Newswire
Calendar
Features
Home
Donate
From the Open-Publishing Calendar
From the Open-Publishing Newswire
Indybay Feature
Related Categories: North Bay / Marin | Racial Justice
Santa Rosa Police Department underscores changes since summer 2020 protests
by Nashelly Chavez
Wednesday May 12th, 2021 12:30 AM
The outcome of the 2020 BLM movement on Santa Rosa Police department. There has now been changes that have been made within the police department involving stricter rules for less-lethal munitions and long-range sound system for orders. Awareness of human right violations that were done with the use of tear gas and the less-lethal munitions. In need of better communication of protocols in handling situations like that better. 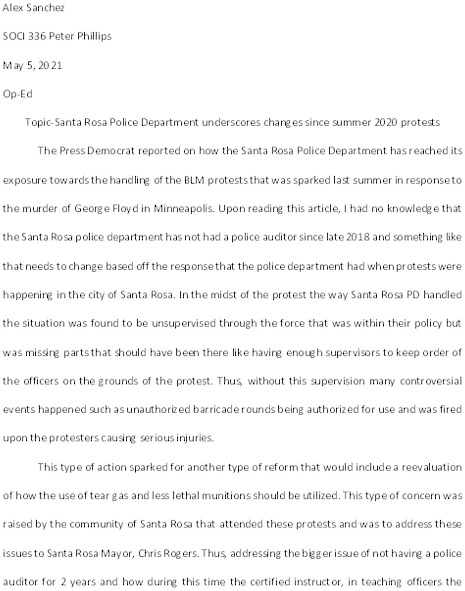 Download PDF (32.0KB)
Supervisors who track use of force during large protests, stricter rules for less-lethal munitions and a long-range sound system for dispersal orders are among changes Santa Rosa police have implemented since police accountability protests surged into the city last spring, at times overwhelming officers.

Santa Rosa Police Chief Ray Navarro and captains John Cregan and Eric Litchfield highlighted those modifications in a presentation to the Santa Rosa City Council on Wednesday, the second part of a two-day special session examining how officers responded to demonstrators.

Attended by hundreds of people over several days in Santa Rosa, the demonstrations were part of a larger national outrage over the Memorial Day murder of George Floyd by a Minneapolis police officer and broader frustrations over the deaths of other people of color at the hands of police.

Reports from two city-contracted consulting firms presented Tuesday noted that most of the force used by the department during the protests was within policy, though they underlined systemwide gaps that led to issues such as a not having enough supervisors to manage officers on the ground.

For undetermined reasons, unauthorized barricade rounds slipped into the hands of officers at the protests, one report found. Four such rounds were fired at the crowds, and one struck a protester, causing serious injuries.
An additional report from the Sonoma County Commission on Human Rights accused the department’s officers of committing human rights violations on protesters and urged the department to make changes to its policies around the use of tear gas and less-lethal munitions such as rubber bullets during protests.

“I am fully committed to making sure that our mistakes noted in these reports will not be repeated and that best practices will be employed to limit issues … into the future,” Navarro said.

They included concerns over the selection process of a police auditor, a position that’s sat vacant since late 2018; when and how police should use less lethal munitions; and the police department’s broader policies around protests, marches and rallies.

A request for proposals for the police auditor position was posted on the city’s bidding website in late April. As of Monday, the city had received no response and the last day to apply is May 14, city spokeswoman Adriane Mertens said.

The purchase of a Long Range Acoustic Device to help officers better communicate dispersal orders, which was the department’s solution to a recommendation issued by one of the outside firms, raised concerns from several public speakers who said they feared the tool could be used as a weapon against the public, also merited further discussion, Rogers said. Such devices have been criticized for being so loud they can cause hearing damage, and the ACLU has called for their use against protesters to be suspended.


The city’s public safety subcommittee was identified by the council as the appropriate venue to explore those issues.

“I as the mayor and we as a council need to look at what the expectations are that we are asking (officers) to meet and have a conversation about whether that meets the expectations of the community,” Rogers said.

Among the department’s response to consultants’ recommendations was the development of a compliance supervisor position, which will monitor the deployment of force during large events to make sure officers follow department policy, Cregan said.


Professional standards and training sergeants will be assigned to those positions because of their expertise in the subject matter, a practice that would prevent supervisors who are reviewing use of force incidents from being involved in the deployments themselves.

That misstep was identified in one of the two city-contracted reports.

“One of the key triggers for this is going to be having the staffing to allow this to occur,” Cregan said, noting that supervisors were in short supply during last year’s protests.

A training sergeant who was responsible for controlling the less lethal munitions was out in the field and not available. Instead, the task fell to the department’s logistics team, whose members were not experts in munitions, he said.

Since last summer’s protests, the department has identified a group of armorers, who are experts in all types of munitions and will log, issue and track the use of the equipment.

In response to questions from Rogers about the use of the LARD equipment, Navarro said measures were in place to make sure the device was not used to hurt the public. A supervisor’s clearance was required before the tool could be used, he added.

“The intent is for clear communication,” Navarro said. “It is not to use it as a weapon. That’s one of the first things I asked about when we were looking at purchasing a new communication device.”

Also part of Wednesday’s meeting was an update from Santa Rosa’s Office of Community Engagement, whose staff has met with more than 200 people to discuss policing and equity within the city’s government since last summer.

Common themes that emerged from those conversations were an interest in increased police oversight and positive relationship building between police and community members, as well as a stronger effort to address homelessness and institutional racism throughout Santa Rosa, said Danielle Garduño, a community engagement coordinator with the office.

You can reach Staff Writer Nashelly Chavez at 707-521-5203 or nashelly.chavez [at] pressdemocrat.com. On Twitter @nashellytweets.
https://www.pressdemocrat.com/article/news...
Add Your Comments
Support Independent Media
We are 100% volunteer and depend on your participation to sustain our efforts!