Add an Event
Newswire
Calendar
Features
Home
Donate
From the Open-Publishing Calendar
From the Open-Publishing Newswire
Indybay Feature
Related Categories: Central Valley | Environment & Forest Defense | Government & Elections
Salmon advocates criticize Governor for promoting Sites Dam, voluntary agreements during drought
by Dan Bacher
Monday May 10th, 2021 9:58 AM
Salmon and environmental justice advocates criticized Newsom for using the drought to advocate for Sites Reservoir in Northern California and for his agribusiness-backed voluntary agreements that have held up badly-needed state actions to save salmon and other imperiled fish species from extinction. 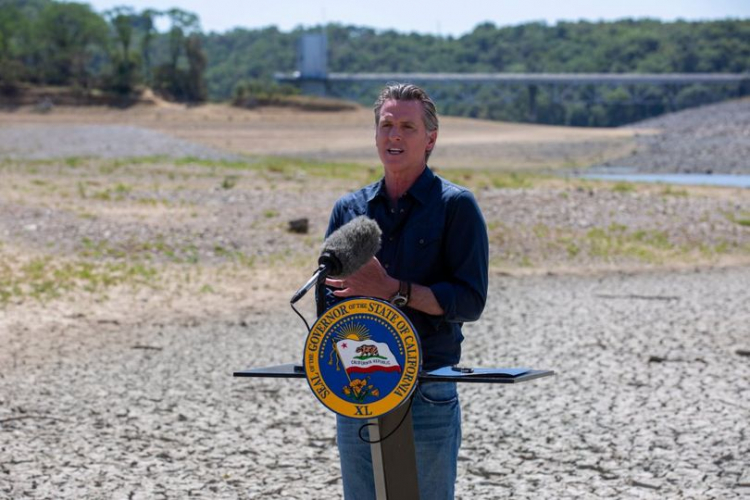 original image (810x540)
On a dry section of extremely low Lake Mendocino on Wednesday, California Governor Gavin Newsom declared a regional state of emergency for the Russian River Watershed in Mendocino and Sonoma Counties to protect communities and reduce environmental impacts from the drought, but he didn’t issue a statewide drought emergency as many had hoped he would.

However, salmon and environmental justice advocates criticized Newsom for using the drought to advocate for Sites Reservoir in Northern California and for his agribusiness-backed voluntary agreements that have held up badly-needed state actions to save salmon and other imperiled fish species from extinction.

The Latest Drought Monitor update (droughtmonitor.unl.edu) now depicts most of California experiencing severe to extreme drought, with the entire state being at least "abnormally dry." Key watershed regions in Norcal remain hardest-hit. Continued worsening/expansion is likely through the coming months.

“California is facing the familiar reality of drought conditions, and we know the importance of acting early to anticipate and mitigate the most severe impacts where possible,” Governor Newsom said. “Climate change is intensifying both the frequency and the severity of dry periods. This ‘new normal’ gives urgency to building drought resilience in regions across the state and preparing for what may be a prolonged drought at our doorstep.”

To further the success of California’s water conservation efforts and increase the state’s drought preparedness, the proclamation directs state agencies to “partner with local water districts and utilities to make all Californians aware of drought, and encourage actions to reduce water usage by promoting the Department of Water Resources’ Save Our Water campaign (https://saveourwater.com) and other water conservation programs.”

The proclamation directs additional actions to coordinate with California Native American tribes; accelerate funding for water supply enhancement, conservation and species protection projects; work with counties to encourage and track reporting of household water shortages including dry residential wells; provide technical and financial assistance for water systems at risk of water shortages; support the agricultural economy and food security; and evaluate and take action to protect terrestrial and aquatic species, among other actions.

To address “acute drought impacts” in the Russian River watershed, the proclamation directs the State Water Board to “consider modifying requirements for reservoir releases or diversion limitations to ensure adequate supplies for critical purposes. The regional state of emergency also enables flexibilities in regulatory requirements and procurement processes to mitigate drought impacts.”

Newsom also noted that “the CDFA is coordinating closely with the USDA to provide aid to growers and ranchers in the Klamath Basin, and the Department of Fish and Wildlife is working with California Native American tribes and commercial and recreational salmon representatives to manage impacts to iconic salmon in the basin.”

After hearing the Governor’s presentation at noon Wednesday, Regina Chichizola, co-director of Save California Salmon, criticized Gavin Newsom for “using the
drought to advocate for new reservoirs in Northern California and for his voluntary agreements that have held up state actions to save salmon from extinction. While we agree that cities are doing their part to conserve water, industrial agribusiness exporters that grow crops hundreds of miles from us are not.”

“Why should NorCal and Native people keep sacrificing for the needs of almonds and Wall Street bets? Gavin Newsom, we need California water justice and climate change action, not more reservoirs. California cannot take action for Truth and Healing and wipe out salmon,” Chichizola responded.

She also noted that “there is not even a mention of how bad your administration has been for salmon and fishermen in this address.”

in her Delta Flows newsletter, Barbara Barrigan-Parrilla, Executive Director of Restore the Delta, said that Governor Gavin Newsom’s drought emergency proclamation is like being “half-pregnant.”

“He recognizes the drought emergency facing cities and communities of the Russian River watershed. But he avoids the reality that much of the rest of California is just as dry or dryer than where he has proclaimed the emergency,” she stated.
She noted that U.S. Drought Monitor for California reported late last week that over three-fourths of California is in “severe to exceptional drought” just as our winter rainy season ends. We can expect at least six to eight months now of little to no rain in our state.

On the positive side, Barrigan-Parrilla said, “Apart from the Russian River emergency declaration, l Newsom’s action Wednesday does ramp up statewide drought preparation, data collection, funding, and response by key agencies like the departments of Water Resources, Fish and Wildlife, Food and Agriculture, and the State Water Board. Those are good things.”

”The proclamation also lays vague but real groundwork to “prepare for potential salinity issues in the Delta” (see Proclamation Order No. 13),” she pointed out. “This means anything from requests by the state and federal water projects for waivers of salinity objectives in the Delta to installation of rock barriers in western Delta channels. In our last 2012-2016 drought, salinity waivers were granted by the State Water Board to the projects, and in June 2015 DWR installed a gigantic rock barrier across False River, between Bradford and Jersey Islands near Franks Tract and the San Joaquin River. So—rinse and repeat?“

”Such actions always began far earlier in the last drought, as early as 2013 in some cases,” she added. “Why such actions have not yet been announced, with just a few weeks until June, is just strange. The Russian River watershed is only considered “in severe drought” by the Drought Monitor. Meanwhile, the Central Valley, Sierra Nevada, and most of Southern California and are considered in severe, extreme or exceptional drought. Why no emergency proclamation for these conditions covering so much of California? Is our state government not ready, even though the last drought ended just four years ago?”

As Chichizola did, Barrigan-Parrilla also criticized Newsom’s advocacy of the Sites Reservoir and the Big Ag-promoted Voluntary Agreements during a drought.
“Newsom also called for Sites Reservoir and the Voluntary Agreements as drought solutions at this press conference yesterday. Neither of these will solve drought-related water quality problems for the Bay-Delta,” she continued.

“When he gets around to the rest of the state, Restore the Delta thinks that the governor should avoid depleting the big reservoirs like Shasta, Oroville, and Folsom up north. Some of that water may be needed to fight north state wildfires again this season, and it would be a shame for communities there if DWR let these reservoirs’ supplies be exported to southern California reservoirs. This happened in the last drought, and Northern California cities and communities had to endure extreme to exceptional drought with very low supplies,” Barrigan-Parrilla concluded.

Sites Reservoir is a controversial proposed $5.2-billion offstream reservoir project west of Colusa in the Sacramento Valley to be built by the California Department of Water Resources. The project would pump 470,000 to 640,000 acre feet (580,000,000 to 790,000,000 m3) per year of the winter flood flow from the Sacramento River upstream of the Sacramento–San Joaquin River Delta, through existing canals to an artificial lake 14 miles (23 km) away.

In addition to promoting the construction of Sites Reservoir and the voluntary agreements, projects that recreational and commercial fishermen, Tribal leaders conservationists, tribal leaders and Delta advocates say will further harm imperiled salmon, steelhead and other fish populations, the Newsom administrationcontinues full speed ahead with its construction plans for the Delta Tunnel under the Sacramento-San Joaquin River Delta.

Scientists and other opponents of the “Delta Conveyance” project say the tunnel would hasten the extinction of Sacramento River winter and spring run Chinook, Central Valley steelhead, Delta and long fin smelt, green sturgeon and other fish species. In addition, the tunnel would imperil the salmon and steelhead populations on the Klamath and Trinity Rivers that have been integral part of the culture of the Yurok, Hoopa Valley and Karuk Tribes for thousands of years.

It is no surprise that Stewart and Lynda Resnick, billionaire agribusiness tycoons and major promoters of the Delta Tunnel and increased water pumping from the Sacramento-San Joaquin River Delta, donated on March 22 a total of $250,000 to the campaign to fight the Governor’s recall.

While I oppose the recall effort, I fear that the billionaires’ contributions to “Stop the Republican Recall of Governor Newsom” will only bolster Newsom’s support of projects that corporate agribusiness promotes, including the Delta Tunnel, Sites Reservoir and the voluntary water agreements.

These latest donations are not the only donations given to Newsom’s campaigns by the Resnicks since 2018. Newsom received a total of $755,198 in donations from agribusiness in the 2018 election cycle, based on the data from http://www.followthemoney.org. That figure includes a combined $116,800 from Stewart and Lynda Resnick and $58,400 from E.J. Gallo, combined with $579,998 in the agriculture donations category.

The latest donations from the Resnicks come in the wake of the news that the California Department of Fish and Wildlife found zero Delta Smelt (Hypomesus transpacificus), once the most abundant fish species in the estuary, in its 2020 Fall Midwater Trawl Survey throughout the Delta. This was the third year in a row that zero smelt were found in the survey.

“All signs point to the Delta smelt as disappearing from the wild this year, or, perhaps, 2022,” according to a California Water Blog post by Peter Moyle, Karrigan Börk, John Durand, T-C Hung and Andrew L. Rypel.

Salmon populations on the Sacramento River have also declined dramatically. Sacramento River mainstem winter run, spring run and fall run Chinook salmon escapement (1970-1974 v. 2015-2019) have declined 91.0, 99.9 and 79.7 percent, respectively, according to Jennings.
Add Your Comments
Support Independent Media
We are 100% volunteer and depend on your participation to sustain our efforts!