Divest in Israel's Elbit on Tohono O'odham Nation and in Palestine

by Brenda Norrell
The 'Divest in Elbit' panel today reveals the surveillance and weapons of the Israeli defense contractor Elbit Systems, targeting Tohono O'odham and Palestinians, by way of U.S. contracts and funding, violating human rights and international law. 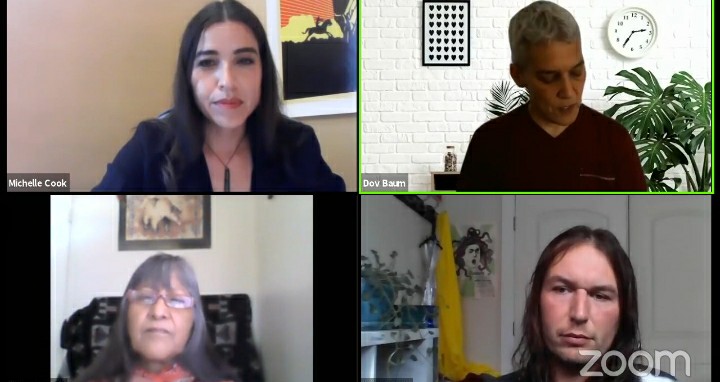 Ofelia Rivas, Tohono O'odham living on the border on her homeland, describes the surveillance, and devastation to O'odham burial places, from construction by Elbit on the Tohono O'odham Nation.

Riivas, founder of O'odham Voice Against the Wall, describes the ongoing militarization and abuses of O'odham by the U.S. Border Patrol.

The atrocities carried out by Elbit in Palestine include killing Palestinians with cluster bombs and white phosphorus.

Investgative reporter Will Parrish describes how Elbit's drone was used for surveillance of Standing Rock Water Protectors in 2016, by way of the U.S. Border Patrol.

Parrish reveals how Elbit promoted its surveillance and weapons to the U.S. Border Patrol at expos in Arizona and Texas.

Dov Baum, an Israeli Jew and activist in Palestine, describes how the U.S. funds Israel and Elbit's militarization and death patrols and weapons in Palestine, a testing ground for horrific weapons sold globally by Elbit.

It was hosted by Natali Segovia and the National Lawyer's Guild, Indigenous Peoples Rights Committee.

Research by O’odham VOICE Against the Wall

Hosted by the Indigenous Peoples Rights Committee: https://nlginternational.org/indigenous-peoples-rights/ and the NLG International Committee

Panelists:
Ophelia Rivas (Tohono O’odham) is founder of O’odham VOICE Against the WALL and has spent her life speaking out against the U.S. Border Patrol and militarization of O’odham lands. https://www.oodhamrights.org/
Will Parrish is an investigative journalist based in Northern California. His web site is https://www.willparrishreports.com
Dov Baum, Ph.D., is the director of Economic Activism for the AFSC – the American Friends Service Committee. These days, they lead the Investigate project mapping companies complicit in mass incarceration and immigrant detention, border security and mass surveillance industries, Israeli apartheid and occupation industries.
Hosted by Natali Segovia, National Lawyers Guild (NLG) Indigenous Peoples Rights Committee, The Indigenous Peoples Rights Committee is organized to take up the struggles of indigenous peoples in the US and throughout the world.

Censored News
https://bsnorrell.blogspot.com/2021/05/watch-now-divest-in-elbit-on-tohono.html
END_OF_DOCUMENT_TOKEN_TO_BE_REPLACED
Add Your Comments
Support Independent Media
We are 100% volunteer and depend on your participation to sustain our efforts!