Sacramento, California - California Tribes, fishermen, and environmental groups are calling on Governor Gavin Newsom to direct state agencies to take action to stop fish kills of California salmon runs that are nearing extinction and to protect water quality. Salmon and good water quality are key to the health of California’s Native people, economy and drinking water supplies. Without immediate action to scale down agricultural water deliveries and protect rivers and reservoir’s water supplies the State will be complicit in causing fish kills and toxic algal blooms in many of the State’s already overdrafted rivers. 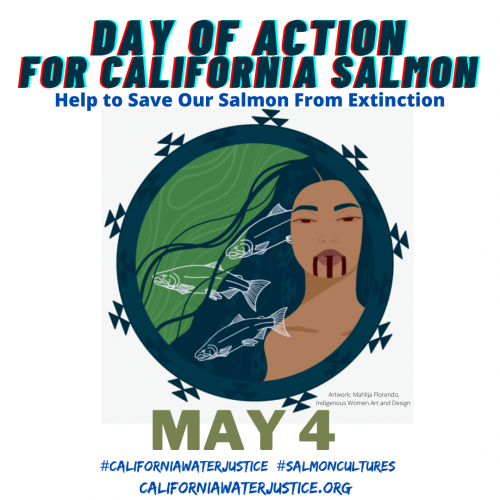 original image (1080x1080)
“California is a salmon state and what happens to the salmon happens to us,“explained Chief Caleen Sisk, Spiritual leader of the Winnemem Wintu Tribe. “What happens to the people if salmon runs are nearing extinction, and if the rivers that feed cities water supplies and reservoirs are dangerously low and full of algae? Not only has Newsom and the state not taken actions to protect reservoir’s storage or rivers flows in the North State, last week he actually tried to say that actions like Sites Reservoir and voluntary agreements for agricultural water withdrawals are drought measures and would end the water wars. These proposals benefit industrial agriculture and exporters, which use 80 percent of the state’s water, not the North state or Tribal communities. Salmon benefit us.”

The coalition urges Gov. Newsom to reassess the state’s water priorities. They point to the fact that the state’s decision during the last drought to prioritize water deliveries to agriculture over rivers contributed to most of the state’s salmon populations edging closer to extinction. Poor water management over recent decades has also led to shut down or severe reductions of commercial and Tribal fishing throughout California and Oregon. They say that due to the warming climate California needs to prioritize water management that promotes environmental justice and addresses the unjust and poorly regulated water rights system in the state that prioritizes almond orchards over cities and fish.

Commercial fishermen have also joined the cry for emergency measures.

“This year the Klamath Management Zone is, once again, closed to California's commercial salmon harvesters. This is coupled with greatly reduced opportunities for both commercial and recreational fisheries south of the KMZ”, explained MIke Conroy, the Executive Director of the Pacific Coast Federation of Fishermen's Associations. "We are losing our salmon fleets and all the jobs that fishing creates. California's salmon fisheries are integral to the identity and heritage of many ports and harbors and culturally important to a great many. Absent water policies that meaningfully consider salmon habitat and survivability at ALL stages of their lifecycle, we may be bearing witness to the last of California's historic salmon fishery.”

Save California Salmon says that due to the dire situation this year they have joined with their partners statewide to start a new campaign asking the governor to take action for California Water Justice. They will kick off the campaign on April 28th at 5:30 with an information State of the Salmon event and are calling for a Day of Action to Stop California Salmon Extinction on May 4th. They are also running ads featuring Tribal members from the Klamath, Trinity and Sacramento River watersheds and have started a petition on change.org.


More information about the day of action and State of the Salmon event is at californiawaterjustice.org. The ads can be viewed at https://twitter.com/CaliSalmon 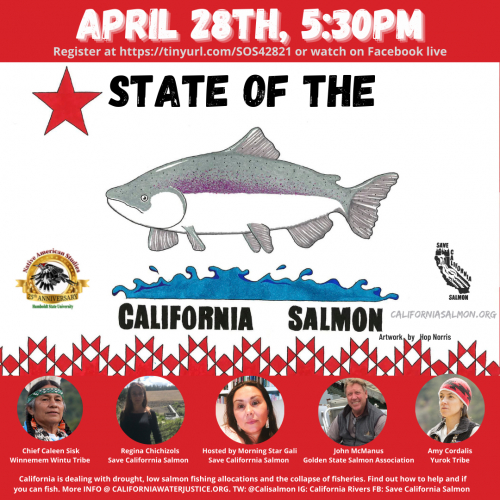