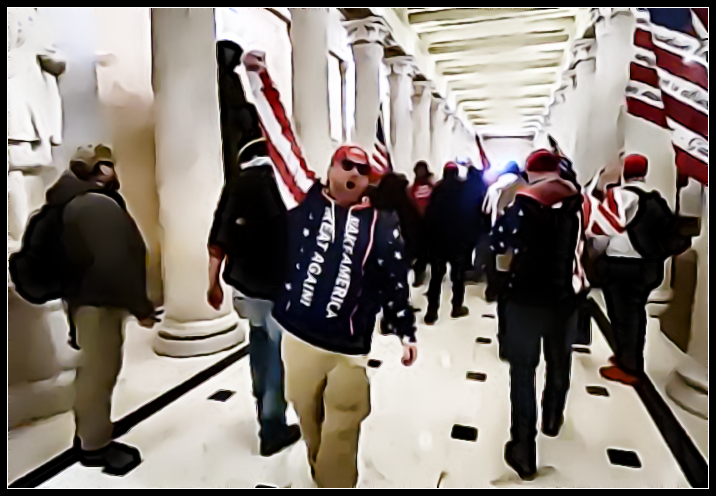 On April 22, Speaker of the House Nancy Pelosi announced that the Democrats, who control both houses of Congress and the presidency, had agreed to a major Republican condition for establishing an “independent bipartisan commission” on the January 6 fascist assault on the U.S. Capitol.

Previously, negotiations had been stalled by the insistence of the entire Republican leadership on terms that would give the Republicans de facto veto power over the commission’s operations and conclusions.

The Republican demands included 50-50 representation, as opposed to the Democrats’ plan for a majority of Democrats on the panel, plus power to issue their own subpoenas and an expansion of the scope of the panel’s mandate to include Republican claims of widespread violence during last summer’s protests over police violence.

Pelosi has accepted the 50-50 representation and a formula that requires at least one Democrat and one Republican to sign off on issuing subpoenas. There is no agreement on keeping the probe focused on January 6 rather than including last summer’s protests, although a handful of anti-Trump Republicans, such as Republican Liz Cheney, have accepted Pelosi’s position.

The goal of the Republicans is to protect the far-right forces who stormed the Capitol and tried to block the congressional certification of Biden’s election victory, while using the panel as a platform to promote the “stolen election” lie and boost Trump’s open assault on basic democratic rights.

On April 20, the New York Times published an op-ed piece by editorial board member Jesse Wegman demanding that Pelosi accept a 50-50 commission on the grounds that nothing could be allowed to stand in the way of establishing a “bipartisan” panel modeled after the “successful and respected” 9/11 Commission.

This, according to the Times, was the “only legitimate way” to provide the American people with a “thorough, unsparing and authoritative investigation that details exactly what took place and how on that horrific day, identifies the larger political and societal forces that encouraged it and points to way toward a future in which such an attack is harder if not impossible to pull off.”

Pelosi and the rest of the Democratic leadership snapped to, granting the Republicans veto power over the issuing of subpoenas and the overall operations of the proposed panel but stopping short of accepting Republican demands for unilateral power to subpoena witnesses and the “broadening “of the scope of the investigation to turn it into a witch-hunt of left-wing protesters and socialists, who participated in last summer’s wave of mass demonstrations against police violence.

This was immediately followed by a column in the Washington Post by Greg Sargent endorsing the cave-in as a reasonable compromise. At the same time, Sargent acknowledged that the Republicans are continuing to promote Trump’s lies and cover up his direct role in the fascist insurrection, while imposing laws in states they politically control to restrict the voting rights of workers and poor people.

Pelosi’s concessions came in the midst of a series of revelations confirming the role of state agencies and virtually the entire Republican Party in preparing and executing the attempted coup. The most damning revelations concerned an internal Pentagon timeline that confirmed, among other things, the critical role of top Trump-appointed Pentagon officials in backing the coup. The timeline confirmed that these officials ignored pleas from the commander of the D.C. National Guard, from top Democrats hiding from armed fascists intent on seizing and killing them, and even from Vice President Mike Pence, and delayed for more than three hours their authorization for the deployment of National Guard troops to clear the fascist mob from the Capitol building.

This was followed by a report by the inspector general of the D.C. Capitol Police exposing the lies of top police officials and congressional security officials and proving that they issued orders for a stand-down of police to enable Trump’s insurrectionists to gain entry to the Capitol. Even more damning revelations emerged in a House committee hearing on the report held last week.

For the most part, the Times, the Post and the rest of the corporate media buried these revelations or failed to report them at all.

What has prompted the rush by the Democrats and their media allies to revive the so-called “bipartisan commission,” accepting the Republicans’ arrogant and provocative conditions, is not the danger of a cover-up but precisely the opposite. They fear the collapse of the cover-up they are leading, and, with it, their entire policy of “bipartisanship” and “unity” with their “Republican colleagues.” The central purpose of this policy is to politically rehabilitate the Republican Party.

In the months leading up to the events of January 6, Trump made clear his intention to overthrow an election result if it went against him, promoting the lie of pervasive voting fraud to whip up fascistic militia groups in support of a coup. He had attempted to carry out a coup on June 1, in response to the mass interracial protests that swept the US and much of the world following the police murder of George Floyd. Speaking in the White House Rose Garden, he threatened to invoke the 1807 Insurrection Act and deploy active-duty troops to crush the demonstrations. His coup failed not due to any opposition from the Democratic Party, which deliberately downplayed the event, but due to opposition within the military brass, which deemed the attempt premature and unprepared.

During and after the election, Biden and the Democrats dismissed Trump’s open threats to overturn the election if it went against him, instead criticizing him for “dividing the country.” Even after Biden’s lopsided election victory and Trump’s refusal to concede, the Republican leadership, including then-Senate Majority Leader Mitch McConnell, lent legitimacy to this attempt to overturn millions of votes. McConnell for weeks defended Trump’s baseless lawsuits and forced recounts of certified results in pivotal “swing states,” claiming that he had “every right” to challenge the results.

In the early morning hours of January 7, only hours after the insurrectionists had left the Capitol, 137 Republican House members and seven Republican senators voted against the certification of the Biden’s election victory. Those who voted against included far-right and outright fascist politicians who had played key roles in facilitating the coup attempt.

This was followed by the Democrats’ abortive impeachment of Trump, which received the support of only a handful of Republicans in both chambers and was conducted in a manner designed to avoid exposing the complicity of the Republican Party as a whole.

The Democrats’ fecklessness and duplicity have emboldened the Republicans to line up behind Trump and defend open fascists within their congressional ranks, such as Marjorie Taylor Greene, Lauren Boebert and others.

The character of the “independent” bipartisan commission the Democrats are pushing is underscored by the list of former national security and State Department officials who signed the April 6 open letter cited by the Times in its April 20 column insisting on its formation.

The list of signatories is a who’s who of perpetrators and accomplices in US wars of aggression over the past 30 years that have killed millions and destroyed entire societies in Central Asia and the Middle East. Others were directly involved in implementing the police-state measures within the US that accompanied the “war on terror” pretext for regime-change operations and colonial-style wars overseas.

The list includes the director of national intelligence during the Obama administration, James Clapper; the Department of Homeland Security secretary under George W. Bush, Michael Chertoff; the former head of both the CIA and the NSA, Michael Hayden; and dozens more officials implicated in war crimes, coups, torture and the destruction of democratic rights within the US.

Also on the list is former US ambassador and Democratic Congressman Tim Roemer, who served on the 9/11 Commission. The function of this commission, contrary to the claims of the Times, was to carry out a whitewash of the role of high-level officials in the FBI and CIA in facilitating, either by acts of commission or omission, the attacks by the Al Qaeda terrorists who were under US surveillance at the time.

The analysis of the January 6 coup published by the World Socialist Web Site on January 7 has been entirely confirmed. What its author, David North, chairperson of the WSWS International Editorial Board, wrote of the Democrats’ pleas for bipartisanship bears repeating:

Appeals for “unity” with the conspirators clear the path for the next effort to carry out a fascist coup d’état. This is the lesson of the invasion of the state Capitol last April by armed fascist thugs in Lansing, Michigan and the subsequent conspiracy in the autumn of 2020 to kidnap and assassinate the Democratic governor of the state, Gretchen Whitmer. The Democratic Party and media quickly suppressed coverage of these crimes and hardly defended Whitmer against the attack. The plotters, thus far, have received little more than a slap on the wrist.

The Democrats’ response to the fascist conspiracy is not dictated merely by cowardice or stupidity. Rather, as representatives of the financial-corporate oligarchy, they are frightened that the exposure of the criminal conspiracy and its political aims would ignite a mass response within the working class that would spiral into a movement against the capitalist state and the interests it serves.

The Democratic Party is a party of Wall Street, the CIA and the military. On all questions central to the basic economic and geopolitical interests of the corporate-financial oligarchy, the Democratic Party, including its phony “progressive” wing, is in agreement with the Republican Party.

The defense of democratic rights and the struggle against the danger of fascist dictatorship are inseparable from a political break with the Democratic Party and the fight for workers’ power and socialism.

https://www.wsws.org/en/articles/2021/04/2...
Add Your Comments
Support Independent Media
We are 100% volunteer and depend on your participation to sustain our efforts!