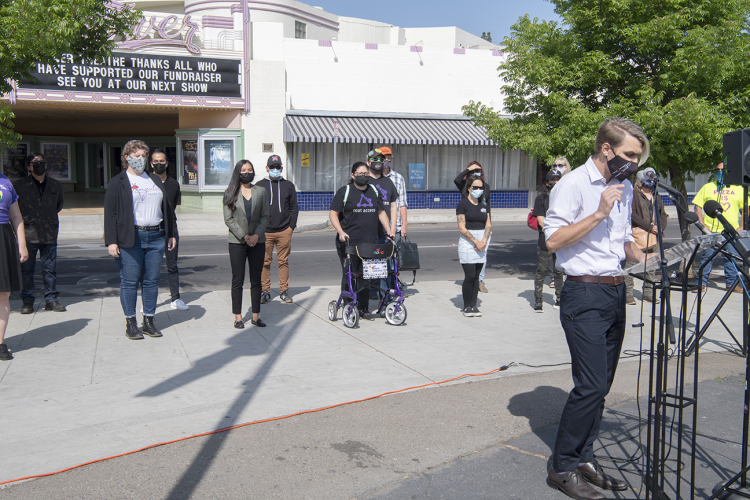 original image (1296x864)
The Tower Theatre has come close to being sold to the Adventure Church, a conservative, anti-LGBTQ+ institution. The Tower District tries to be an inclusive, safe neighborhood for all people—a bohemian neighborhood that attracts Fresnans with an interest in art, good food and beverages.

Escrow on the sale to the church ran out of time, and there is currently no buyer in place.

The weekly Sunday protest at the Tower Theatre on April 11 saw intense pressure on the Save the Tower Theatre movement, when the fascist Proud Boys turned out in force, some of them armed with knives, pepper spray and batons. They moved freely within the crowd of protesters, and there was at least one assault.

The following week, on April 18, police shut down Wishon Avenue and put out barriers to keep the rightists across the street from the protesters. Fresno Police Chief Paco Balderrama and Fresno Mayor Jerry Dyer made a point of showing up. The Proud Boys did not return.

On April 21, a press conference was held across from the theater. Tyler Mackey, executive director of the Tower District Marketing Committee, said that through a GoFundMe effort the community had raised $48,000 for legal fees, which was being spent on litigation to support the bid of Sequoia Brewing Company to purchase the theater from its owner, Laurence Abbate. A sale to Sequoia is agreeable to the protesters.

“Simply saying ‘yes’,” Mackey said, “Mr. Abbate can either save the community further expense, by now coming to his senses, or he can continue in his stubbornness and require this community to raise an additional $50,000 to see this case to trial, many months from now.”

Mackey was asked about the conversation between the Marketing Committee and Abbate: “We have not had any recent direct communication with Laurence. All communication with Laurence seems to go through his attorneys at this point, and they’re not saying much, whether it be about what we’re doing, the efforts to bring about a resolution, or, in any form of denunciation of hate and extremism and domestic terrorists.”

Debi Ruud, the owner of the Fresno Music and Arts Academy, addressed Abbate at the press conference. She said, “Laurence, I really don’t know what you are thinking, but I think it’s clear that our neighborhood wants you to do the right thing and to move along. It is clear that you don’t love this neighborhood the way we all do.

“Please do the right thing and move along, so that the beauty and integrity of this neighborhood can be preserved, so that the arts and the artists have a space to continue to live and breathe and work.

“Please do the right thing and allow someone to buy the theater that will keep it what it is: a historic music and arts venue that supports and values all people and all the arts.”

The Rogue Festival is a wide-ranging musical, comedy and theater festival, held throughout the Tower District. Jaguar Bennett is the MC of the Teaser Show of the Festival, where dozens of acts are previewed at the Tower Theatre before they are performed during the Festival.

Bennett said that if the theater were to be sold to the church, “it would make it very difficult for the Rogue Festival to perform there. We have shows that we don’t feel are appropriate for a church.

“Some of our show titles have been things like ‘Start Your Own Religious Cult for Fun and Profit,’ ‘The Puppetry of the Penis,’ ‘Pretending Things Are a Cock’…I don’t think a church would be comfortable with that, and we would not be comfortable performing in any place that would say ‘Ooh, do you think you really want to do that here?’

“We are committed to a full First Amendment festival where anyone can perform anything. We don’t do curation of our acts, we don’t do censorship of our acts and we simply cannot perform in any venue where that is not assured and guaranteed.”

Protests will continue to take place at Wishon and Olive avenues on Sundays from 8 a.m. to noon.
§Jaguar Bennett at the Rogue Festival in the Tower Theatre in 2019
by Peter Maiden
Saturday Apr 24th, 2021 4:45 PM 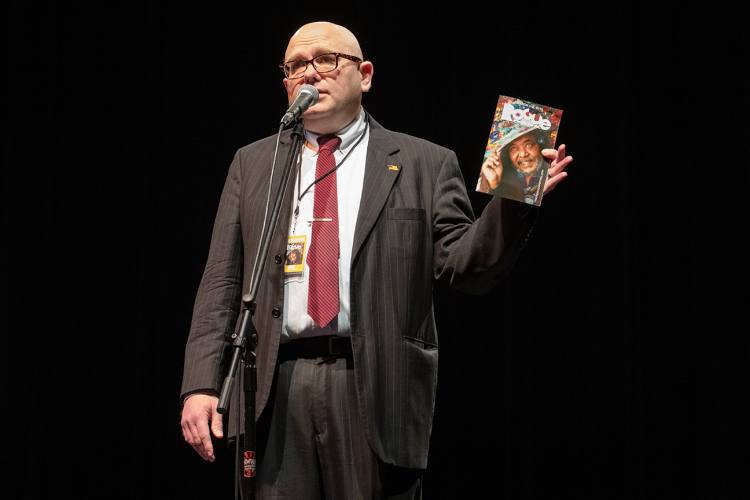