Add an Event
Newswire
Calendar
Features
Home
Donate
From the Open-Publishing Calendar
From the Open-Publishing Newswire
Indybay Feature
Related Categories: U.S. | Police State & Prisons
Police violence targets working people and youth of all racial and ethnic backgrounds
by Niles Niemuth (WSWS repost)
Tuesday Apr 20th, 2021 5:32 AM
While racism is a factor in many police murders and accounts for the fact that blacks and Native Americans are killed at a rate disproportionate to their share of the national population, it is workers and young people—of every skin color, gender, sexuality and national origin—who are the victims of the police. In presenting police violence as a racial issue, of whites against blacks, the media aims to divide the working class and cover up the socioeconomic background of those who are being killed and the social processes which lead to their deaths. 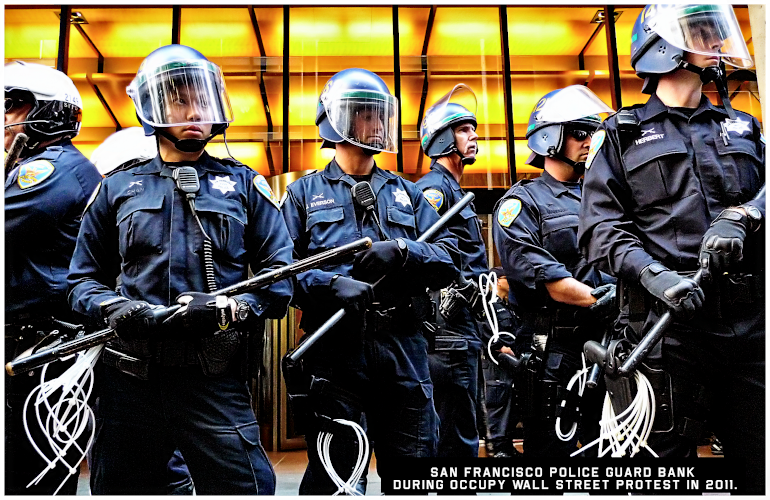 In each of these killings, the victims were white. Each of these tragic deaths has gone unreported in the national media, which has not challenged the police account of events. There has been no questioning of the claims by police that they feared for their lives and that it was necessary to kill in self-defense. No attention has been given to why such killings happen with regularity and how the events could have been handled differently.

As of April 14, there have been at least 265 police killings in 2021 across the United States. The police continue to kill at an unrelenting rate of three people per day, a bloody number that has held steady for years, despite popular protests and outrage over one killing after another.

The trial of former Minneapolis, Minnesota, police officer Derek Chauvin, who is white, for the murder of George Floyd, a black man, which is currently in jury deliberation, provides an opportunity to examine the phenomenon of police violence in the United States. The gruesome forensic review of Chauvin’s cold-blooded murder, livestreamed online, has focused the attention of millions in the US and around the world on the issue.

While the mainstream media and the Democratic Party proclaim that the country is experiencing a “national reckoning” with race and policing, they present the unabated reign of terror by police as a solely racial issue, ignoring its impact on people of all racial and ethnic backgrounds.

CNN anchor Chris Cuomo, during a monologue Friday night, declared that police reform would only happen when “white people’s kids start getting killed.” As the lazy and ignorant news anchor would know if he bothered to do any research, scores of “white people’s kids” are shot by police every year. Google the name of Mykel Dexter Jenkins, a white man shot by police in Chattanooga, Tennessee, on March 19 at the age of 29, and one will read heartbreaking messages posted by family and friends on the legacy page established after his death:

“To my loving Son! Love you and will always keep you in my heart! Love you! From Mom”

“Continue to shine down on us brother”

“Mykel Jenkins brought so many gifts to our life. We will never forget him! He was always so happy and full of life. He could make anyone laugh!”

“You were one true friend Mykel and I’ll never forget you! I love you and R.I.P. till we meet again. This isn’t goodbye only see you later!!!”

“This tree of life is for you sweet brother. May it grow so big for you to climb it to the very top to watch over the ones who loved you dearly.”

Whether the victim is named George Floyd or Mykel Jenkins, whether the skin color of the victim is light or dark, wanton police violence leaves profound grief in its wake.

But this is not the way the story of police killings is presented in the national media.

On Saturday, the New York Times, which has been at the forefront of the systematic campaign to falsify history through a racialist prism, published an analysis of the continued epidemic of police violence co-authored by John Eligon, the paper’s national race correspondent, which focuses on black and Hispanic victims, only alluding to the fact that the largest number of those killed by police are white. A casual reader of the Times’s coverage of police violence will come away with the impression that all of those killed by police are racial minorities.

The deliberate silence of the national media and the Democratic Party on the killing of white workers and youth implies that these killings are legitimate, and there is no reason anyone should take notice. In presenting police violence as a racial issue, of whites against blacks, the media aims to divide the working class and cover up the socioeconomic background of those who are being killed and the social processes which lead to their deaths.

Data collected by the Washington Post records 6,214 police killings in the period between January 2, 2015, and April 14, 2021. The victims are overwhelmingly male (95 percent) and predominately white (46 percent). Blacks make up the second largest group (24 percent), followed by Hispanics (17 percent), Asians (1.6 percent), Native Americans (1.4 percent), and all others (0.7 percent). The average age of a police violence victim is 37. In more than one in five cases the person who was killed was exhibiting signs of mental illness.

Most of those who have been killed, if police reports are to be believed, were brandishing a gun or a knife. But in other instances victims were holding a beer bottle, a pen, binoculars, wasp spray or a chain. At least 207 were killed while holding a toy weapon. In many cases these killings are justified as “suicide by cop.” Approximately 7 percent of victims have been gunned down while unarmed.

Racism is a factor in many police murders and accounts for the fact that blacks and Native Americans are killed at a rate disproportionate to their share of the national population. However, a previous analysis of police violence data by the World Socialist Web Site found that when accounting for the economic and social demographics of the cities and counties where people are killed by police, the glaring racial disparities which are the focus of the media and the Democrats largely disappear.

Overwhelmingly it is workers and young people—of every skin color, gender, sexuality and national origin—who are the victims of the police. This phenomenon is an outgrowth of the social and economic conditions in the United States.

American society is defined by immense inequality. Just 664 billionaires control $4.1 trillion in wealth, more than two-thirds higher than the $2.4 trillion that is held by the bottom half, approximately 165 million people. Inequality has soared during the pandemic as millions of Americans were thrown out of work or had their wages slashed as the stock market soared thanks to the CARES Act bailout, pushing billionaire wealth to record heights. Meanwhile millions have lined up in miles-long food lines in order to feed their families, many seeking aid for the first time.

The police, as Frederick Engels noted, are “special bodies of armed men” created to defend the capitalist system and the inequality it creates. Many officers are veterans of the last three decades of imperialist war in the Middle East, and police departments have been equipped and trained to use the weapons of war. With experience in counterinsurgency, they are conditioned to kill. The police are the first line of defense against the working class, deployed by the capitalists to police discontent in impoverished neighborhoods, suppress protests and break strikes.

Ending police violence requires putting an end to the capitalist order which the police defend. The protest against police violence and racism must be infused with a class consciousness. The killing will only end when the working class takes power for itself on the basis of a socialist program, reorganizing society to meet its needs, not those of the capitalist elite who dominate society.

https://www.wsws.org/en/articles/2021/04/2...
Add Your Comments
Support Independent Media
We are 100% volunteer and depend on your participation to sustain our efforts!