Add an Event
Newswire
Calendar
Features
Home
Donate
From the Open-Publishing Calendar
From the Open-Publishing Newswire
Indybay Feature
Related Categories: International | Police State & Prisons
April 24: Paris, France demonstration for Mumia Abu-Jamal
by French Collectif Libérations Mumia
Monday Apr 19th, 2021 7:13 PM
Featured below is an email newsletter released by the French Collectif Libérations Mumia, leading up to the April 24 event near the US embassy in Paris, France at 3:00 pm on the Place de la Concorde. On this occasion, a delegation will file a motion with the US Embassy. 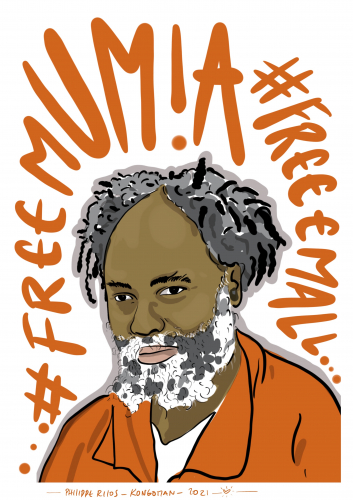 On this occasion a delegation will table a motion at the United States Embassy.

As a reminder, our previous gathering (April 7) was banned just a few hours before it was held by the Paris Police Prefect. The decree that was served to us did not include any reprimand on our gatherings for a quarter of a century in the same place but solely on the grounds of the health constraints of the Covid pandemic and insufficient police forces to ensure their safety ... Except that the same week almost all union, political and environmental demonstrations in Paris and in the provinces (Lille, Lyon and Strasbourg for the Mumia gatherings) were able to take place in accordance with the decision of the Council of State during the first confinement of 2020 by which the Government had been called to order and to respect the constitutional right to demonstrate.

MUMIA'S LIFE IS STILL IN OUR HANDS!

A big thank you to all those of you - many in France - who called on the authorities in Pennsylvania to demand a little humanity from this man who is seriously ill to the point that his very life is in danger.

This worldwide mobilization allowed his wife Wadiya and Pam Africa (historic spokesperson for Mumia support in Philadelphia) to finally be able to get in touch with him. Again hospitalized for a week, the heart operation scheduled for April 15 was postponed until Monday April 19 without further details on his condition from the prison and medical authorities.

This situation, still as worrying according to his personal doctor - who was not authorized to speak to his patient - once again poses the inescapable problem of his release so that he can benefit from the care that neither the prison enclosure, nor the hospital under the coercive supervision of the prison administration cannot guarantee him. This is the whole issue of this new international day of mobilization on April 24, in the United States in Philadelphia, New York, San Francisco… and in the world in Paris, London, Mexico…

PARTICIPATE IN THE MOBILIZATION OF SOCIAL NETWORKS IN THE UNITED STATES

By sending this message "TOGETHER WE LIBERATE MUMIA / TOGETHER WE WILL FREE MUMIA" signed with your LAST NAME / FIRST NAME / CITY or VILLAGE / FRANCE to the centralized support address in Mumia in the United States: bringmumiahome [at] gmail.com

By respecting the following recommendations: write in French or in English, be brief and do not make any reference to the questioning of the prison administration and the American authorities. Slip your card in a white envelope. Do not forget to mention your address on the back and to stamp it (1.50 € up to 20 gr). Despite these precautions, the Administration having full censorship power, your mail may not reach Mumia or will be returned to you. So don't be offended if you don't receive a response, especially since Mumia has very little financial and material resources to thank you. However, do not hesitate to write to him because this approach constitutes both a means of pressure on the American authorities and of protection for him:

CAMPAIGN IN FRANCE FOR THE LIBERATION OF MUMIA:

• Claude Guillaumaud-Pujol, co-animator of the French Collective Libérer Mumia, participated in the rally of international solidarity with political prisoners organized in Paris on April 17 by the STE 93 and the international secretariat of the CNT. The cases in particular of Mumia Abu-Jamal, Leonard Peltier and Georges Ibrahim Adallah were mentioned. 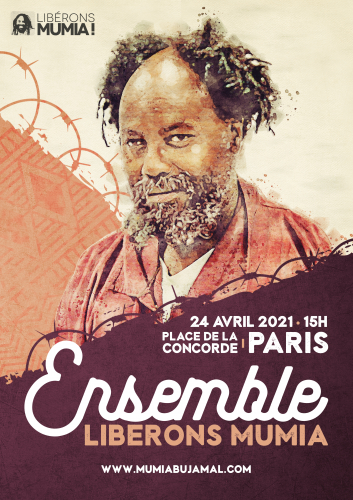 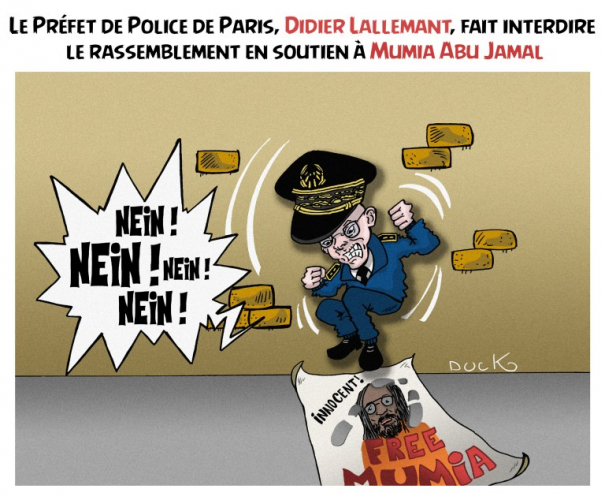 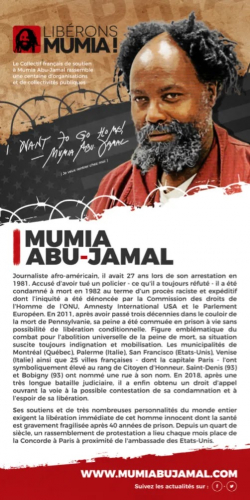 original image (502x1002)
http://mumiabujamal.com/
Add Your Comments
Support Independent Media
We are 100% volunteer and depend on your participation to sustain our efforts!