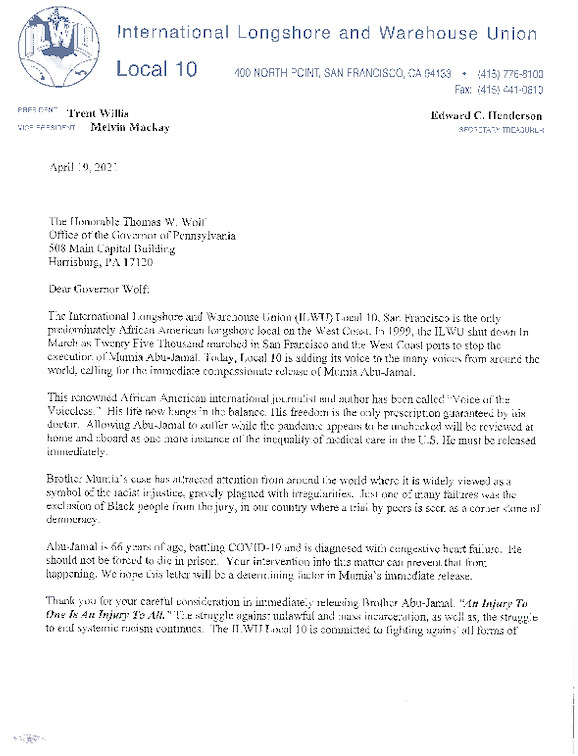 The International Longshore and Warehouse Union (IL WU) Local 10, San Francisco is the only predominately African American longshore local on the West Coast. In 1999, the ILWU shut down In March as Twenty Five Thousand marched in San Francisco and the West Coast ports to stop the execution of Mumia Abu-Jamal. Today, Local 10 is adding its voice to the many voices from around the world, calling for the immediate compassionate release of Mumia Abu-Jamal.

This renowned African American international journalist and author has been called “Voice of the Voiceless." His life now hangs in the balance. His freedom is the only prescription guaranteed by his doctor. Allowing Abu-Jamal to suffer while the pandemic appears to be unchecked will be reviewed at home and aboard as one more instance of the inequality of medical care in the U.S. He must be released immediately.

Brother Mumia's case has attracted attention from around the world where it is widely viewed as a symbol of the racist injustice, gravely plagued with irregularities. Just one of many failures was the exclusion of Black people from the jury, in our country where a trial by peers is seen as a corner stone of democracy.

Abu-Jamal is 66 years of age, battling COVID-19 and is diagnosed with congestive heart failure. He should not be forced to die in prison. Your intervention into this matter can prevent that from happening. We hope this letter will be a determining factor in Mumia's immediate release. 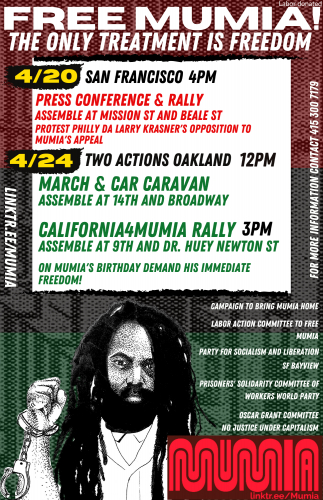 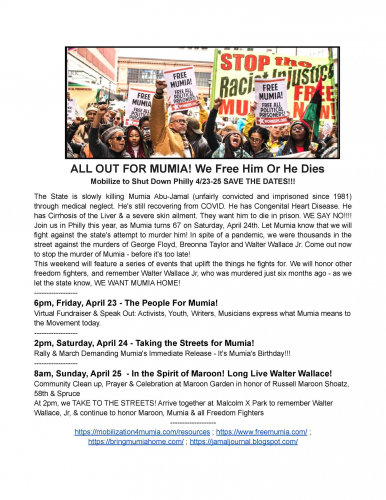 original image (1582x2048)
Add Your Comments
LATEST COMMENTS ABOUT THIS ARTICLE
Listed below are the latest comments about this post.
These comments are submitted anonymously by website visitors.