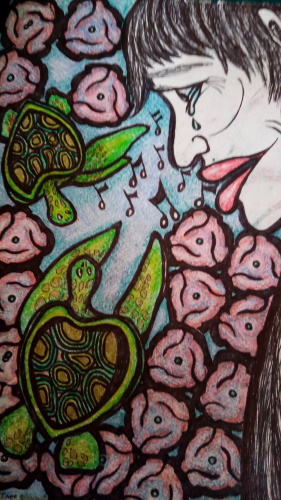 original image (2304x4096)
The whole world has nothing better to do than watch and chatter on and on, for days and days, about a ridiculous, big, stuck boat.

Not much is barely mentioned about the Ever Given container ship, that jammed up and got stuck in the Suez Canal, for so very long, with connecting it to our Planet's Climate Crisis.

I did read in more than one account that it ran aground in the waters of the passageway during a very sudden and intense sand storm.

Now I also read that the Suez Canal was "recently" completely updated and overhauled by Egypt in 2015 and they spent a ton of money, so that a far more efficient canal would increase commerce via canal for them and everyone else, and it seems to have worked. So the ship did not run aground, I gather, because the canal was run down, it isn't.

To bad the mainstream (corporation owned) presses of the world aren't using this world's major curiosity event (of the Ever Given freighter clogging the Suez Canal) that has everyone's attention right "this minute" for days, to connect it to increased sand storms devastating the globe right now, due to our Climate Crisis.

What a sad and shockingly missed opportunity, to get the word out in mass about Climate Crisis, with such a major event, that all the people of the world have been talking about these last few days!!

Same with pretty much how we got Covid-19 Corona Pandemic Virus; few in the mainstream presses across the globe make the vital connection between this virus and some of the ones that came before it these last decades being crucially linked to our Climate Crisis. Instead the focus is on more racism motivated reporting of how the Covid-19 arrived via some open market setting in China where it was passed to us by some live animal being butchered and sold for human consumption. What a picture! Such markets are essential to many global rural and city communities and have existed fine and dandy for centuries; now is not the time to suddenly vilify Chinese market goers. Even some noted scientists have picked up on this verbage and listed it as a major possibility, more unconscious racism; I'm not saying that it never happens though, it's just vastly over exaggerated, to say the least.

The other one that's true, but still ignores the major Climate Crisis cause that everyone is seriously seeming to avoid, is: how mankind (not so kind by the way) is encroaching, more into areas where animals live, usually without any humans around much, and setting up areas of raising domesticated livestock for human consumption, and then thereby exposing them to wild animal carriers of these viruses, like bats.

I'm saying these reasons are the perfect excuses, to avoid at all costs, what climate scientists have been screaming about for quite awhile now, that there is a long-term pattern through the decades of new viruses, that yes, are passed from animal to human, but serious climate scientists are highlighting more the great big Climate Crisis related reason of how and where.

As temperatures and weather patterns fluctuate drastically and disastrously, masses of animal species, many of them carriers of animal viruses, again, like bats, (Poor bats; I think they are adorable.) are forced to migrate into more and more areas occupied by humans! Tada! There it is! Logical, simple, and yet our mainstream media, our global politicians, and all the governments don't want to talk about the most major Climate Crisis related sources for: Covid-19 like viruses, or catastrophic floods and fires, and intense freezing cold weather, or alarmingly over-the-top heat spells, or crop destruction, or freighters like the Ever Given that run aground because of intense sand storms from "out of nowhere," etc. And why is this? Money and power! Because we want to continue "Business as Usual" and don't want to mess up profits.

And why is the enriching common sense promoted by Climate Crisis scientists, and other brave social activist thinkers of our world, being ignored, I mean what's really underneath this?

I turn to modern psychology and how Bowlby and Ainsworth's Attachment Theory has been finally proven, after many case studies and experiments since the 1950's. The theory basically is about how if children are not able to properly emotionally and mentally attach to their primary caregivers, typically, their parent(s), it actually changes the neurology of our kiddie brains into negative patterns, and that creates a person who grows up into an adult with all sorts of problems like: all sorts of addictions, difficulty around power and control around others and oneself, creates a short-sighted addiction for immediate gain regardless of consequences for others, and all kinds of self absorption and narcissistic behavior that's tough to evolve out of, etc.

Now it was thought that this only applied to children that had been abused that developed poor attachment to primary caregivers; it's been found that the vast majority of we humans were "poorly attached." It's been discovered that precious little kiddies need way more positive stimulus to attach properly to safe caregivers than was ever thought, and so even though many children were not abused and we're loved, serious harm is done by unintentional neglect of a whole bunch of needed positive stimulus by even caring caretakers.

This is a major reason why the spot-on-logic of say Climate Crisis Scientists is mostly totally ignored by the higher-ups in the world governments. Our world's governments especially illustrate a fine example of how poorly "attached" and thereby wounded our species really is from everyone's past.

Oh a few '"liberal" politicians globally, make a big show to placate us regular people by saying: "We got to reduce this, ... or reduce that...," but it really doesn't do much of anything in the dwindling Earth's long run, except get them another term in office.

Especially hazardous are the symptoms of the woundedness of those groomed by their upbringings to take political office or power, who are so addicted to keeping their political spot and bailing out and giving huge tax cuts etc to their corporate backers and banks, etc, these people definitely show the symptoms of our species "attachment" wounding. They have developed symptoms from this that manifest as: addictions to greed, immediate short-sighted gains, thirst for power and control.

Unfortunately, pretty much, no one escapes this; most of the rest of us are addicted also to: drugs like alcohol, crystal meth, opiates, over and under exercising, and food addictions, etc, and also have our own control issues, and addictions to being in charge, and forms of selfishness, that get played out on a family level, and in our love relationship partnerships, and infiltrates our communities too, including our precious social-activist circles, trying so very hard to make the world a better place!

This modern psychology angle connection, is in no way supposed to ignore centuries of oppression imposed on working poor folk by terrible governing systems we've experienced on this Planet as human beings! Such systems as: feudalism, slavery, capitalism, (Any kind of capitalism; even the supposed nicer social-democratic kind found in Scandinavian countries is still having byproducts that are destroying our Earth.) and we must include even some inadequate examples of communism that fell short of achieving equality for all. Rather, the modern psychology information, about how our species is wounded, and how the difficult healing takes place, has to go hand-in-hand with an absolutely essential upgrade of socialist and modern Marxist systems structure and values, that for example, are more based on worker owned systems of business, like worker owned co-ops from small to corporate size.

So there it is: Climate Crisis, Stuck Freighter, Corona Viruses, Severe Weather, Our Old Terrible Political Systems, and Our Species Wounding, all in a row, all painfully connected, all obliviously dancing a Conga-line in the night club that is our Earth, under the stars. Everyone swaying their hips, and grasping the person in front of them, but going round and round, waiting and waiting, for the light of day.