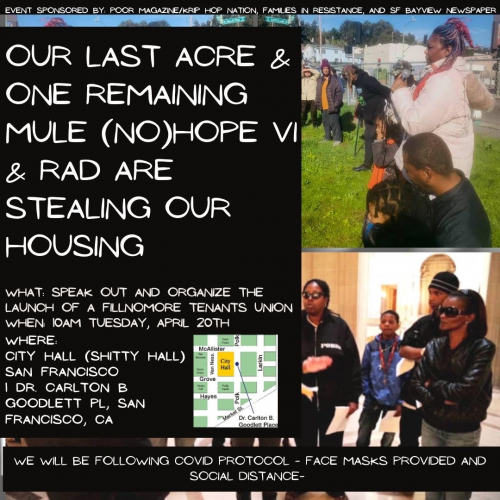 original image (1080x1080)
Since 2013 in back-room deals with non-profit organizations, the San Francisco Housing Authority and HUD has been quietly enacting a benignly named plan (RAD) which results in the decimation of the last shred of housing for the very poorest residents of San Francisco.

"This is a national movement to kill public housing and its very sad - in many other cities across the US they have completely destroyed all the public housing, said Greg, one of the organizers of the End eRADification Coalition - a poor peoples led land and equity back movement of POOR Magazine/Prensa POBRE

"Housing Authority has been sending 90 day eviction notices to alot of my neighbors, " said Teresa Molina, a POOR Magazine/Prensa POBRE reportera and resident of Sunnydale. Fellow tenants and residents of other pubic housing units like Sunnydale and Double Rock have also been receiving notices as also reported by comrades from the United Front Against Displacement (UFAD) who has been organizing with tenants in those complexes.

While a global pandemic rages on and people are struggling to stay housed, and not become houseless, Housing Authority has been sending notices to tenants and closing down buildings for "redevelopment" with private non-profits like Mercy Housing.

"They purposely never maintenance our existing units so Housing Authority can make a case for "redevelopment", said QueennandiXSheba, reporter and poverty skola with POOR Magazine, resident of Plaza East in the Fillmore district and co-founder of the End E-Radification Coalition

"Many of the poorest peoples have lived, taken care of and raised their families in public housing for generations, we are helping folks launch a tenants union to stay in their homes, but our fight is not just to keep this housing but also to demand Black and Brown equity, land and reparations for all the displaced, HUD removed tenants who are now homeless or facing homelessness, we are seeking a law firm to help us make this happen," said Tiny Gray-Garcia, co-founder of POOR Magazine, Homefulness and End-eRADification Coalition.

Organizers are using this speak-out to launch a tenants union in the buildings, connect with National organizers who are also fighting this removal project and also contiue to help people create their own self-determined, land liberation/Land Back movements like Homefulness.

‘Both political parties have attack public housing for decades. Trump took RAD from Obama and put it on the fast track. Will Bidden repeal RAD or continue with it?” Leroy Moore, Founder of Krip Hop Nation and Co-founder of Homefulness

POOR Magazine is a poor and indigenous people-led art, culture and liberation movement. We are inviting all organizations to co-sponsor this effort and join us tomorrow in standing with the tenants.

Articles on this from the SFBayview and POOR Magazine

Stealing our Last Acre and One Remaining Mule

Selling our Homes to Private Investors

From Privatization to Reparations 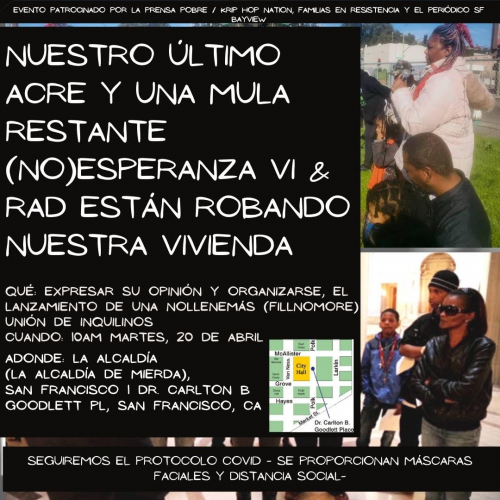 original image (1080x1080)
http://poormagazine.org/
Add Your Comments
Support Independent Media
We are 100% volunteer and depend on your participation to sustain our efforts!