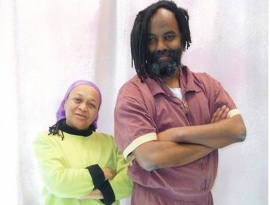 This alert was just released by Johanna Fernandez from the Campaign to Bring Mumia Home:

We are very concerned about the health and safety of Mumia Abu-Jamal, the world renown veteran Black Panther, political prisoner and radio journalist.

Mumia’s wife, Wadiya Jamal, and his close friends who hear directly from Mumia daily, have not heard from him since this past Saturday, April 10th.

Mumia’s attorney, Bob Boyle, called the Chief Council of the Department of Corrections to inquire about Mumia, to no avail. And Mumia’s chosen doctor, Dr. Ricardo Alvarez, as well as other supporters have called prison officials and left messages of inquiry about Mumia’s wellbeing. No one has gotten a clear answer about Mumia’s status. Mark Taylor, Mumia's Spiritual Counselor, was ambiguously told by Mr. Steinart, the head of the prison's infirmary, "I can only say that at this time he is okay." This suggests that something happened to Mumia and he may be in danger.

Please call the following offices to demand that Mumia immediately be allowed to call his wife or one of his supporters.

https://jamaljournal-movement.blogspot.com...
Add Your Comments
Support Independent Media
We are 100% volunteer and depend on your participation to sustain our efforts!