Add an Event
Newswire
Calendar
Features
Home
Donate
From the Open-Publishing Calendar
From the Open-Publishing Newswire
Indybay Feature
Related Categories: California | San Francisco | U.S. | Media Activism & Independent Media | Police State & Prisons | Racial Justice
Letter to KQED for Mumia: Signed by Angela Davis, Boots Riley, and others
by Letter reposted by the Jamal Journal
Monday Apr 12th, 2021 3:01 PM
This letter to KQED from Angela Davis, Boots Riley and others was written on April 11. It is reprinted here in full by the Jamal Journal, published by the uncompromising International Concerned Family and Friends of Mumia Abu-Jamal. 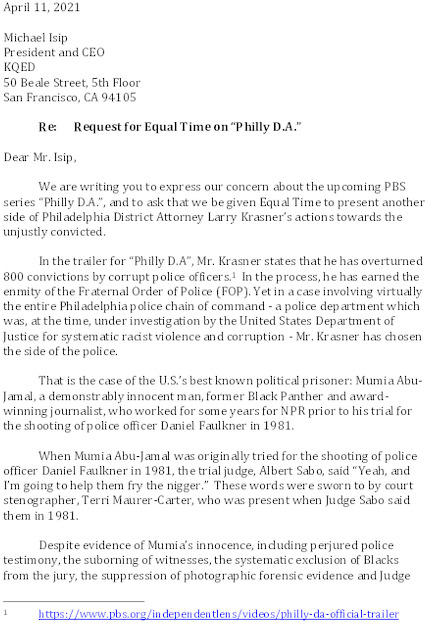 Re: Request for Equal Time on “Philly D.A.”

Dear Mr. Isip,
We are writing you to express our concern about the upcoming PBS series “Philly D.A.,” and to ask that we be given Equal Time to present another side of Philadelphia District Attorney Larry Krasner’s actions towards the unjustly convicted.

In the trailer for “Philly D.A”, Mr. Krasner states that he has overturned 800 convictions by corrupt police officers (see video: https://www.pbs.org/independentlens/videos/philly-da-official-trailer ). In the process, he has earned the enmity of the Fraternal Order of Police (FOP). Yet in a case involving virtually the entire Philadelphia police chain of command - a police department which was, at the time, under investigation by the United States Department of Justice for systematic racist violence and corruption - Mr. Krasner has chosen the side of the police.

That is the case of the U.S.’s best known political prisoner: Mumia Abu Jamal, a demonstrably innocent man, former Black Panther and award winning journalist, who worked for some years for NPR prior to his trial for the shooting of police officer Daniel Faulkner in 1981.

When Mumia Abu-Jamal was originally tried for the shooting of police officer Daniel Faulkner in 1981, the trial judge, Albert Sabo, said “Yeah, and I’m going to help them fry the nigger.” These words were sworn to by court stenographer, Terri Maurer-Carter, who was present when Judge Sabo said them in 1981.

Despite evidence of Mumia’s innocence, including perjured police testimony, the suborning of witnesses, the systematic exclusion of Blacks from the jury, the suppression of photographic forensic evidence and Judge Sabo’s refusal to hear the confession of another man that he actually killed Daniel Faulkner, D.A. Larry Krasner, in two recent court filings, has embraced every single aspect of the original frame-up, thus adopting the perspective of the Fraternal Order of Police.

Krasner now opposes appeal rights granted to Abu-Jamal by Philadelphia Court of Common Pleas Judge Leon Tucker, the only Black jurist to ever review the case. Tucker, a Republican, found that all of Mumia’s previous appeals, spanning more than a decade, were tainted by the appearance of judicial bias.

Nelson Mandela and Bishop Desmond Tutu have spoken out in Abu Jamal’s defense. So have dozens of members of the British Parliament and of the U.S. Congressional Black Caucus. Labor unions across the globe have demanded his freedom. Here in the Bay Area, the International Longshore and Warehouse Union (ILWU) shut down docks along the entire West Coast for a day in 1999 to demand his freedom, leading a march of 25,000 through the streets of San Francisco.

We request that Independent Lens/KQED broadcast the 25-minute documentary “Manufacturing Guilt” by Stephen Vittoria (from First Run Features). Mr. Vittoria has granted us permission to show his film. The film demonstrates that every key piece of the prosecution’s case is a lie and that Mumia is innocent (https://www.youtube.com/watch?v=y0GbNwKmHaE ).

Civil rights activist and former 49ers quarterback Colin Kaepernick also recently recorded a five minute video summing up the case and calling for Mumia’s freedom (watch the video: https://www.youtube.com/watch?v=To62En75n8I ) We are requesting that you broadcast this video alongside “Philly D.A.”.

Independent Lens and KQED can present a fairer and more balanced view of Larry Krasner and of Mumia Abu-Jamal by showing “Manufacturing Guilt” and the Kaepernick video. Truth, the concept of Equal Time and the Fairness Doctrine require nothing less.

Jay Steinberg
No Justice Under Capitalism 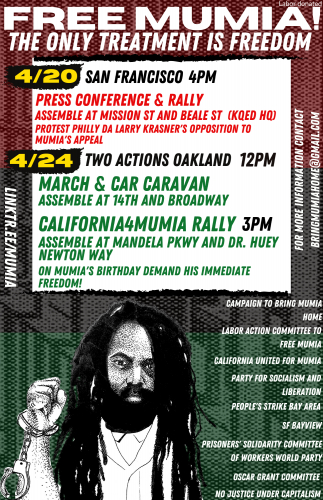 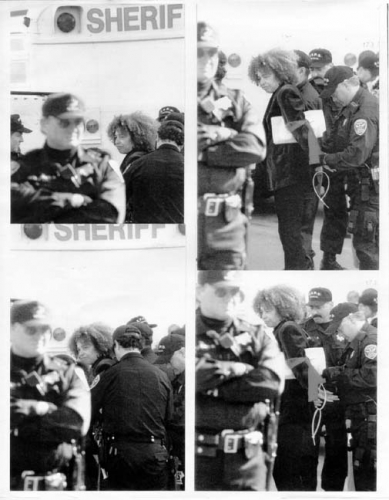 original image (505x648)
Photo by Indybay
http://www.jamaljournal.com
Add Your Comments
Support Independent Media
We are 100% volunteer and depend on your participation to sustain our efforts!