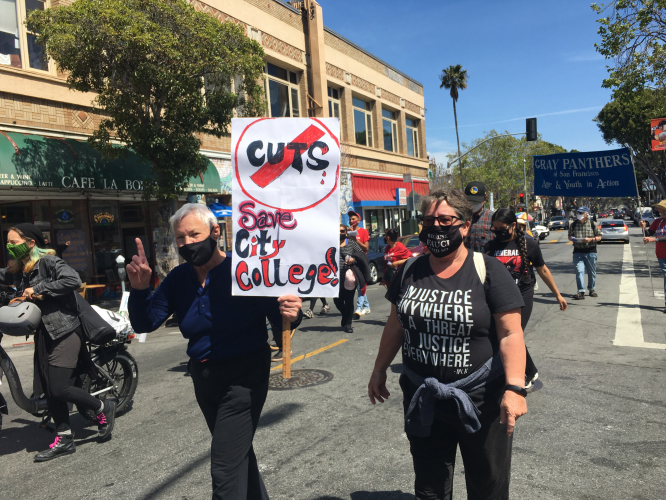 They discussed how entire programs including music and ESL are being eliminated by the administration, community college board of trustees and the State Community College chancellor Oakley.

They also reported that the ethnic studies program programs like Filipino studies are being eliminated as well as other programs.
Also they discussed the role of privatization of public education which is aimed at forcing students to take out massive loans and go to private for profit colleges. They marched through the Mission to sites important to public education.

Public Education, Privatization, Corruption And The Destruction Of Our Schools
https://youtu.be/S_eu5u70tTE


CCSF Chancellor Supports Downsizing Of CCSF & Says State Community College Chancellor Want It As A Well Backed By Governor Newsom & Demos
https://mobile.twitter.com/AFT2121/status/1375604479978967043
CCSF is a majority student of color pillar of SF. It's the single largest job trainer in the City. But CCSF Chancellor Vurdien and State Chancellor Oakley want to cut our College in half right when our City will need it most. SF recovers through City. #IamCCSF #CFTConvention

CFT 2019 Vote of no confidence in the community college chancellor
https://www.cft.org/resolution/vote-no-confidence-community-college-chancellor
May 3, 2019
Whereas, the principle of participatory governance in the California Community Colleges has been established and codified in law (AB 1725); and

Whereas, participatory governance only functions when it is practiced at all levels of the administration and faculty governing bodies; and

Whereas, confidence in the leadership of the chief executive of a college system is integral to the effective administration of the California Community College mission; and

Whereas, the state Chancellor’s Office has demonstrated a lack of transparency and collegial consultations which includes, but is not limited to:

Introducing legislation and state budget for Guided Pathways;
Introducing language into AB 19 that requires districts and colleges participate in Guided Pathways in order to receive funding;
Reducing the meetings to consult with stakeholders on the budget change proposal and legislation to a single meeting;
Making Consultation Council a reporting of state Chancellor’s Office activities rather than a forum where consensus can be achieved on critical issues facing community colleges;
Failing to engage in consultation and consensus building with stakeholders concerning AB 705.
There was a lack of discussion and preparation of the college districts for the changes required in AB 705. There was a lack of funding for the workload required for the mandated activity for AB 705 and none has been planned in the future. There has been no discussion on the unintended consequences of AB705 implementation. The state Chancellor’s Office has announced that reading programs will be eliminated based on AB 705 even though the bill contains no language to that effect;
Failing to consult with any stakeholders before the introduction of the online college in the governor’s budget in January 2018. Alterations in the online college proposal have been made when testifying before the budget and higher education committees without consultation with faculty. New programs such as medical coding have been proposed by the state chancellor without a functioning local Academic Senate (no faculty have been hired yet) and as a consequence no participatory governance. In addition, an online medical coding program will directly compete with the current program at Cosumnes River College. The online college will be subscription-based and competency-based without discussion with a local Academic Senate and another example of a lack of participatory governance. These academic and professional matters could have been at least discussed and possibly resolved with the State Academic Senate, but that did not occur. The new faculty for the online college will not be represented by a union, will not have a collectively bargained contract, and will be on a meet-and-confer basis. The state chancellor has not engaged with the faculty unions about the parameters of contract for the online college faculty;
Failing to consult with any stakeholders before the introduction of the new funding formula in the governor’s budget in January 2018. There were virtually no simulations run to test the viability of such a funding formula or to determine unintended consequences. The Chancellor’s Office convened a task force of chief executive officers to seek alternative proposals from which faculty were excluded;
Whereas, these and other examples have illustrated that the state chancellor has demonstrated a lack of transparency and collegial consultation with the faculty organizations, has actively blocked faculty leadership access to meetings in which decisions have been made, and exhibits a general lack of acknowledgement of the concerns of faculty;

Therefore, be it resolved, that the California Federation of Teachers has no confidence in the California Community College Chancellor, Eloy Ortiz Oakley;

Be it further resolved, that the CFT send this resolution with a letter stating our vote of no confidence to the California Community College Board of Governors and to Gov. Gavin Newsom.

https://www.sfexaminer.com/news/ccsf-programs-fighting-for-survival-in-face-of-proposed-layoffs-class-cuts/?fbclid=IwAR2LYoaHwnkYfBkI1ONiftjJnQO4odwk2XWz1golweuWg-GjxwqACfODWeI
MADELEINE BECK
Feb. 26, 2021 7:30 p.m.
Following the announcement of 160 potential faculty and staff layoffs at City College of San Francisco, some students are speaking out in the hopes of saving their programs.

City College Board of Trustees approved layoff notices Thursday across 39 departments and services that could be reduced or eliminated completely.

Although the 160 layoffs are not final, the college is legally required to give notice to staff by March 15 that their positions may be cut.

One of the programs facing potential cuts is the Aircraft Maintenance Technology program, which had 75 students enrolled when its lease at San Francisco International Airport was terminated during the pandemic, City College student trustee Vick Chung said Friday.

AMT students were “displaced for nearly one year, with no guarantee or tangible process for allowing them to complete their certificate program or transfer,” Chung said at a “Save the CCSF Airport Campus” public forum Friday. The lease was terminated two weeks before 20 students were set to graduate from the program,.

The program now may be cut completely, given the lack of physical space to host it.

Friday’s forum was called by San Francisco Board of Supervisors President Shamann Walton, and co-hosted by the San Francisco Labor Council and CCSF Associated Students. Over 100 people attended, including Supervisor Gordon Mar and many City College students.

Sebastian Escobar, a student currently in the program, said he was inspired to join by his father, who graduated with his airframe and powerplant licenses while attending the program back in the 1980s.

“This program has been a legacy providing economic opportunities across generations,” Escobar said. “So maintaining this program in San Francisco for people like myself and many others that are here with us, and other people that weren’t able to attend because work or general life … a lot of it is involved with equity and accessibility.”

Escobar said that he has limited access to transportation, so the only campus accessible to him is CCSF. He said it would be “financially burdensome” for him and for many of his peers to attend the next nearest school.

Mar said he and the Board of Supervisors can follow up with SFO to try to find space for this “important program,” and they can be allies of the students when it comes to issues with City College administration.

“I know this is just part of the broader struggle to save City College and all the critical programs that City College provides for the communities,” Mar said.

The petition in support of a resolution calling for no confidence in the administration leadership at City College of San Francisco now has over 1,400 signers. Please consider adding your name and encouraging others to do so. Here is the link to the petition: http://chng.it/mkNrg8nx 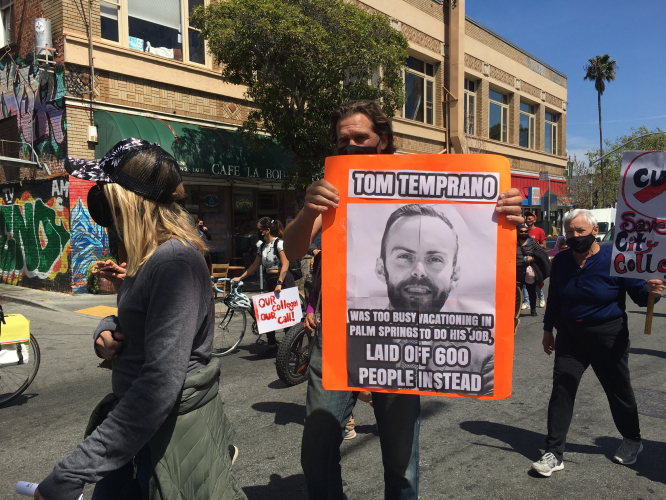 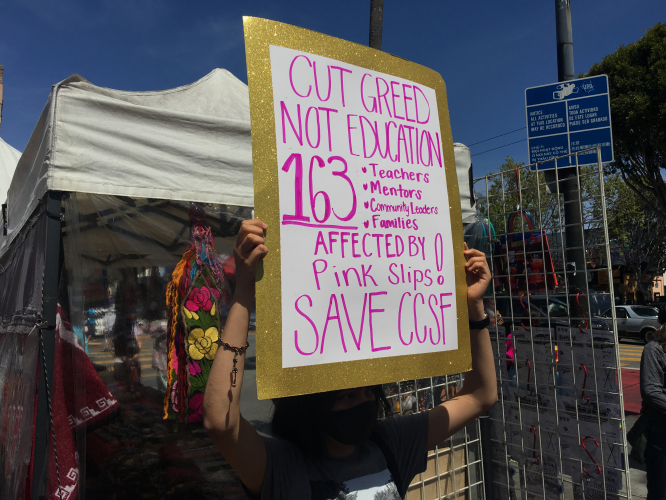 original image (4032x3024)
While the number of high paid administrators are going up the faculty and classes are being eliminated. Millions are also being given to developers with no oversight after voters passed a
$845 million bond to repair and rebuild the college. If the cuts go through there will be no students however.
https://youtu.be/TrT-J0tzNdE
§Save CCSF
by Labor Video Project
Sunday Apr 11th, 2021 9:28 PM 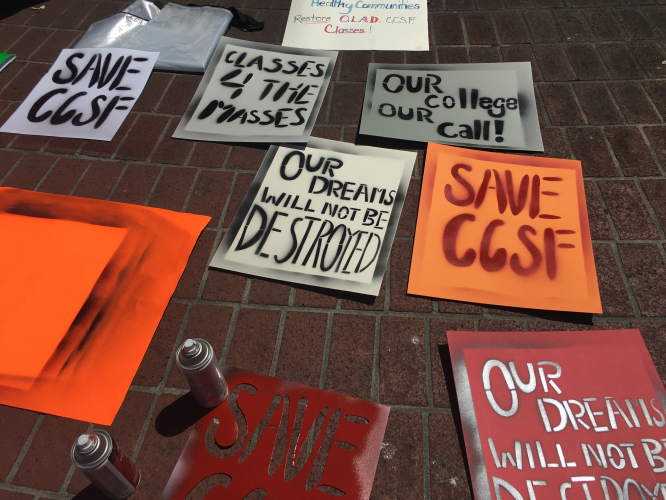 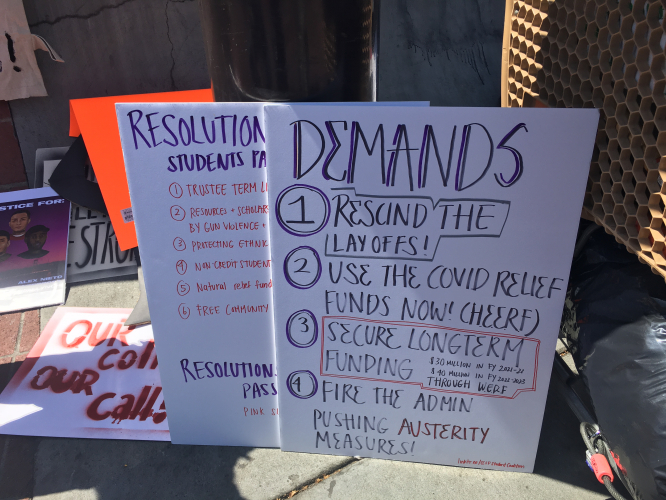 original image (4032x3024)
The administration and Board of Trustees are engaged in a wrecking operation that will destroy San Francisco Community College.
https://youtu.be/TrT-J0tzNdE
§Pink Slip For Administration and Trustees
by Labor Video Project
Sunday Apr 11th, 2021 9:28 PM 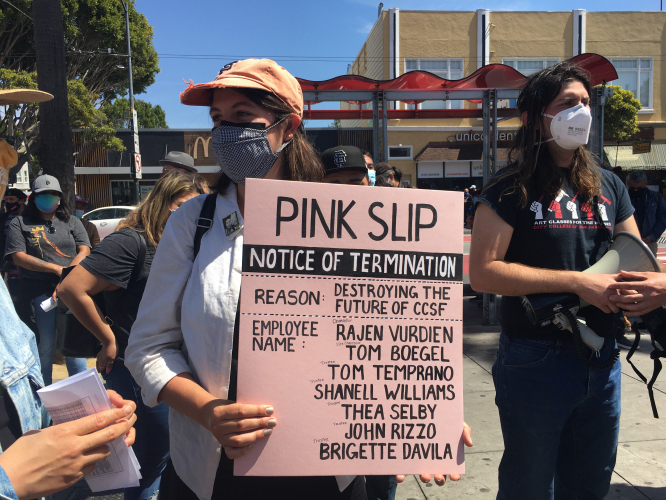 original image (4032x3024)
A call was made for a pink slip for the top administrators and the Board of Trustee members who are dismembering the community college.
https://youtu.be/TrT-J0tzNdE
§No Class Cuts-No Pink Slips
by Labor Video Project
Sunday Apr 11th, 2021 9:28 PM 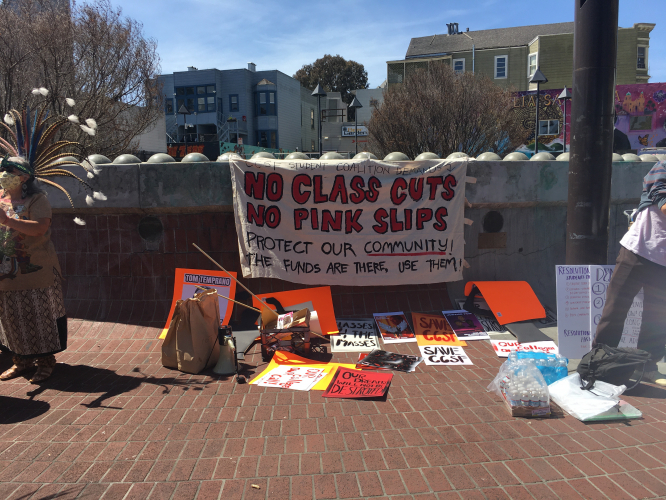 original image (4032x3024)
Students, faculty and community members are angry about the massive class cuts and pink slips. The administration with the support of the Board of Trustees are pushing for the union to go into concession bargaining and give up their pay and benefits to limit the layoffs.
https://youtu.be/TrT-J0tzNdE
Add Your Comments
Support Independent Media
We are 100% volunteer and depend on your participation to sustain our efforts!