by Dan Bacher
“Yesterday's oil spill is a deadly reminder that the environmental racism that’s shaped and harmed Black, Indigenous, and people of color continues to put our health at risk,” said Martha Dina Arguello, STAND-LA Coalition and Physicians for Social Responsibility-Los Angeles. 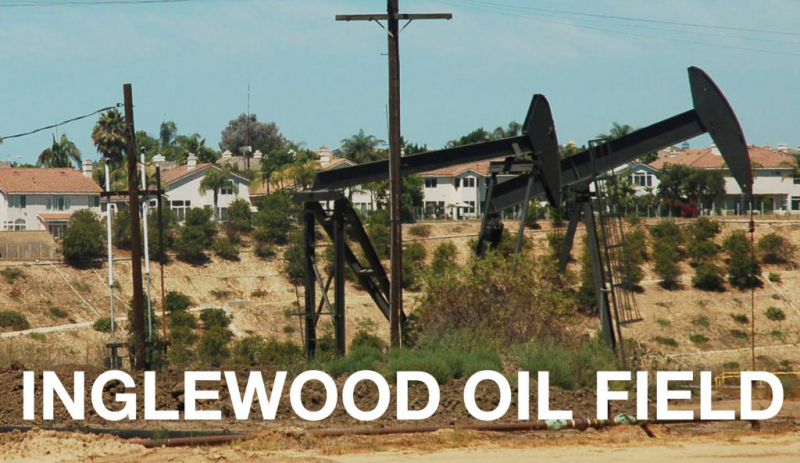 original image (1024x593)
LOS ANGELES -- Over 1,600 gallons of crude oil (40 barrels) spilled yesterday in the Inglewood Oil Field, the largest urban field in the country, when a pipeline was left open.

The Governors Office of Emergency Services Hazardous Material report listed the cause of the spill as as “human error.” The Los Angeles City Fire Department responded to the incident and CalGEM, the state oil and gas regulating agency, was notified. There were no injuries reported and the spill  did not enter any waterway or drinking water supply

“A shipping pipeline valve was left open causing the release,” the report stated. “Material flowed onto soil in secondary containment. All material will be recovered. RP is handling the containment and clean up.”

Since oil was first discovered at the field in 1924, 1,600 wells have been drilled within the historical boundaries of the field. Today, the oil field’s boundary covers approximately 1,000 acres

More than a million people live within five miles of the oil field’s boundaries, according to a press release from a coalition of community members, environmental justice advocates, and environmental groups.

“Of people living in the surrounding area, 52% are Black, a much higher percentage than the countywide 8%,” the release stated. “This massive oil field is located alongside homes and schools, burdening families with air pollution and poor health outcomes including lung disease, leukemia, lymphoma, lung cancer, nervous system damage, birth defects, and premature death. The rate of asthma related ER visits in Baldwin Hills is 4.4 times greater than the LA County average.”

The groups said the Inglewood Oil Field has a repeated history of spills, including the following:

• In 2019, a spill occurred when a pipe broke and the oil and contaminated water mixture traveled down a hill to a storm drain.
• In 2018, a containment tank spilled in the oil field, releasing a cloud of toxic benzene and exposing residents within 4,100 feet to a known carcinogen that reached almost seven times the EPA legal limit at the oil field fence line.
• In 2010, a methane seepage from the Inglewood Oil Field led to the closure of a Boneyard dog park.
• In 2005 and 2006, two major toxic releases occurred causing residents to evacuate their homes because of the potential risks.

Jurisdiction over the Inglewood Oil Field is split between Culver City and Los Angeles County. Last October, the Culver City Council voted to phase out production and fully remediate the site in their portion of the field within the next five years. Their vote included important direction to protect both workers and communities as part of the just transition away from neighborhood oil drilling, according to the groups.

“Currently, the City of Los Angeles is considering the same approach. A motion to consider the phase out of oil drilling city-wide passed through the City Council’s Energy, Climate Change and Environmental Justice Committee on December 1, 2020 and will likely be taken up for vote at the Planning Land Use and Management Committee in the coming weeks. It becomes increasingly urgent and apparent every single day: Los Angeles must take steps to phase out oil and gas production to protect the health of our communities.”

Representatives of groups in the coalition today issued statements responding to the latest spill at this urban oil field.

"Our hearts go out to the folks who were involuntarily exposed to the toxins and carcinogens released by this spill,” said David Haake, MD, chair of the Sierra Club's Clean Break Committee and community member living in proximity to the Inglewood Oil Field. “Unfortunately, this incident is another in a long pattern of spills and other deadly mishaps at the Inglewood Oil Field. To protect the health and safety of its citizens, Culver City is already taking action to phase out oil operations in their portion of the Inglewood Oil Field. We call on Los Angeles County officials to do the same in the rest of the field.”

“Yesterday's oil spill is a deadly reminder that the environmental racism that’s shaped and harmed Black, Indigenous, and people of color continues to put our health at risk,” said Martha Dina Arguello, STAND-LA Coalition and Physicians for Social Responsibility-Los Angeles. “A pattern of oil spills and the daily and ‘authorized’ toxic emissions both demonstrate that oil extraction is inherently dangerous practice that has no place in our region. We look forward to working with Los Angeles County to take immediate steps to phase out oil and gas production.”

“More than 1,600 gallons of oil spilling in a predominantly Black neighborhood is exactly the kind of nightmare we see with neighborhood drilling,” said Maya Golden-Krasner, deputy director of the Center for Biological Diversity’s Climate Law Institute. “Communities like Baldwin Hills have been living with the dangers and health harms from oil drilling for generations. LA County needs to follow Culver City’s lead and immediately commit to phasing out drilling within five years,”

“What’s terrifying about health dangers like this is that the average person living nearby rarely has any way of knowing it even happened. This is an ongoing crisis we can’t keep sweeping under the rug - it’s time that the County commits to partnering with frontline communities and supporting the real solutions they are putting forward,” concluded Ethan Senser, Southern California Organizer with Food & Water Watch.

Also today, the environmental justice coalition VISION released a scorecard assessing the oil and gas records of California legislators. This scorecard represents a comprehensive analysis of legislative voting records during each legislator’s entire time in office.

According to VISION, “It is the first and only scorecard to take into account the past nine years of service, cumulatively scoring legislators' key votes on environmental justice provisions and major financial contributions received from the oil and gas industry.”

The key findings confirm the findings of my hundreds of articles investigating regulatory capture by Big Oil and Big Gas over the past twelve years: Despite California’s “green” and “progressive” facade, the fact is that Big Oil, Big Gas, Big Ag and other Big Money interests have controlled the Legislature, Governors Office and the regulatory agencies in recent years.

Over the past decade, very few bills opposed by the oil and gas industry have made it to the Governor’s Desk. Legislation that never made it out of the Legislature include a bill to protect “marine protected areas” from offshore oil drilling; bills to stop fracking; and a bill create health and safety setbacks around oil and gas wells

The report card reveals the following data on the California Assembly and State Senate:

Nearly 50% of assemblymembers received an “F” grade for their ties to the fossil fuel industry.

30% of assemblymembers received an “A” grade for standing with environmental justice communities.

36% of senators received an “F” grade for their ties to the fossil fuel industry.

24% of senators received an “A” grade for standing with environmental justice communities.

In a press briefing today, Wendy Miranda from Communities for a Better Environment (CBE) discussed her experience of living in Wilmington, one of the most polluted communities in the state.

“Growing up I’ve seen how it’s affected my neighbors and friends,” said Miranda. “It was very common for all of my friends to have asthma; we would always see them having nosebleeds throughout the day, or headaches from the odors. As a community we’ve experienced oil spills in the past due to leaking from plugged wells. As frontline community members we shouldn’t have to be constantly dealing with these issues every day.”

The groups noted that next week, the Natural Resources Committee will vote on Senate Bill 467, a bill that would require CalGEM to establish a minimum setback distance between oil and gas operations and communities, ban dangerous extraction methods including fracking, and provide steps for a just transition for fossil fuel workers.

Senators Wiener and Limón introduced the bill in response to the urgent need to protect communities living on the front lines of California’s oil and gas operations and answered Gov. Gavin Newsom’s call in an executive order last September for a ban on fracking in the state.