Add an Event
Newswire
Calendar
Features
Home
Donate
From the Open-Publishing Calendar
From the Open-Publishing Newswire
Indybay Feature
Related Categories: Americas | International
Ten Things for US to Understand about Latin America
by Laura Wells
Wednesday Apr 7th, 2021 5:56 PM
The more we know about what is really happening in Latin America, the more we can see that the region can be a source of inspiration rather than a threat requiring US sanctions. 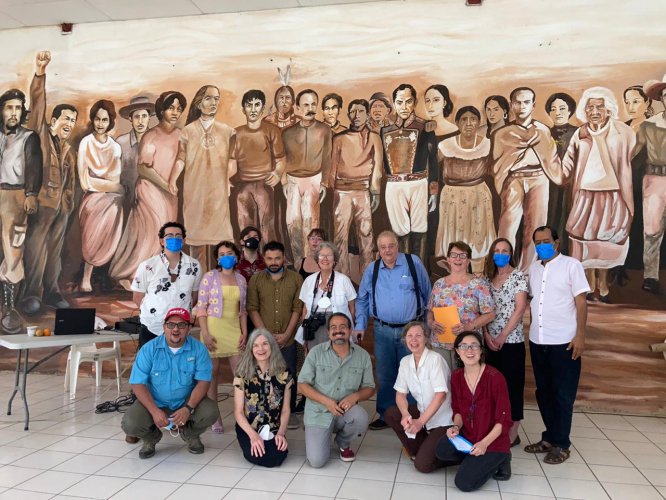 original image (1280x960)
The United States — the land and people — will be a lot better when we dump our sense of US supremacy.

I just returned from Nicaragua after participating in a two-week political delegation coordinated by Friends of ATC, Alliance for Global Justice, and Sanctions Kill. I had already visited the other two countries named by Trump's Secretary of State Pompeo as the "Troika of Tyranny." I knew "tyranny" was a lie about Cuba and Venezuela, and I wanted to see if it was also a lie about Nicaragua, especially since there is a common impression across the political spectrum that Daniel Ortega was good in the 1980s but became corrupt and authoritarian when he returned to the presidency in 2006.

Here are ten things for US to understand about Latin America. A shift in consciousness about our neighbors will help our country as well as theirs.

1. Threat of a good example. That is the main reason countries get on the US bad lists, not oil since not all maligned countries even have oil. A related reason is that the countries do not "have the interest of the United States at heart" as CIA director George Tenet said during the US-backed 2002 coup against Venezuela's President Hugo Chavez. The bad lists include the "Troika of Tyranny" and the 30-plus countries around the globe suffering from the deadly effects of US sanctions. The US justifies sanctions by saying they are due to matters we care about deeply, such as human rights abuses and trafficking. Meanwhile, the United Nations charter clearly prohibits "unilateral coercive measures" taken by one country against another.

2. Sovereignty YES, Sanctions NO. Latin American countries are sovereign nations. They are not a "backyard" requiring US protection or interference. They have many leaders, in government and not in government, who are very intelligent with in-depth knowledge of history. They are not, as the US government and media call them, dictators, regimes, strong-men, caudillos or tyrants. To repeat, they are sovereign nations capable of choosing their own leaders. Certainly anyone familiar with US elections can believe it's possible to find better, more easily verified electoral systems outside the US — check out Venezuela's system, which is computerized and has auditable paper ballots.

3. Constitutions get updated. Most Latin American countries are among the more than 90 countries in the world with proportional representation. PR is the key to having multiple parties, which allow voters to actually affect their governments because they can vote FOR the candidates most aligned with their values, not just AGAINST the worst candidates. In the US we're told it's virtually impossible to eliminate from our constitution even the based-on-slavery Electoral College, which installed two recent presidents who lost the popular vote, both Bush II and Trump.

4. Term limits are not a solution. Term limits are not the great electoral reform many people believe them to be. Nicaragua and some other "bad list" Latin American governments have dispensed with them. When Venezuela held a vote to remove term limits, there were loud cries that "Hugo Chavez wants to be dictator for life!" but significantly, those accusers did not point out that Venezuela joined other nations without term limits, like the U.K., Germany, Italy, Japan, and most Scandinavian nations. When facing term limits, elected officials tend to be less focused on their current duties and more focused on positioning themselves and their campaign contributors for their next move. Terms limits came in after FDR and stopped voters from being able to re-elect presidents they still wanted. More effective electoral reforms are proportional representation, free and fair media coverage, and open debates.

5. Nicaragua's healthcare system is free. A major hospital has a huge sign telling people, "All services are free. If anyone tries to present you with a bill, report it." That certainly constitutes a "threat of a good example." When a poor country like Nicaragua can provide healthcare to its residents, and even to a US citizen participating in our two-week delegation, then there is no excuse for the US, the wealthiest nation the planet has ever known, to have the worst healthcare system — in terms of cost, access, and results — of the 30 wealthy, industrialized (OECD) countries. I know people question statistics with good reason, but it's clear Nicaragua, Cuba, and Venezuela have dealt with the COVID pandemic better than the US. The Nicaraguan government had plans in place as early as January 2020 to prevent the spread of COVID, but did not impose quarantines. Most Nicaraguans could not have worked from home on their computers. Quarantines would have been an economic death knell to the majority of the population that works in very small businesses including farms and the informal economy of open air stands selling everything from food to furniture.

6. Food sovereignty is key to Nicaragua's resilience. Nicaragua produces about 90% of its food, primarily on the small farms of the campesinos. This represents a beneficial change from the mono-cropping agribusiness model that took over so much land in Latin America, and from the abandonment of farming that happened in oil-rich Venezuela in the 1900s. The ability of Nicaraguans to feed themselves locally helps them survive despite the pressures of US sanctions, the COVID pandemic, and yet another 2020 disaster: two hurricanes, category 4 Eta and then category 5 Iota, two weeks apart in November.

7. Devastating hurricanes — climate crisis is real. The delegation visited Wawa Bar, a small community hit by both hurricanes. It is in a semi-autonomous region on the Caribbean Coast that has afro-descendant and indigenous populations. The devastation was heart-breaking — huge trees that had survived decades of hurricanes were uprooted; 700 head of cattle were killed; crops were ruined; and the soil had become too salty from the flooding to replant — but the people were inspiring. Not one person died; everyone was evacuated in time; community members were moving back, every one. Food was provided and within weeks the government restored electricity and sent roofing supplies so everyone again had a roof over their head. Among the first buildings the community restored was the school. The hurricanes had destroyed their textbooks, bilingual in both Spanish and the indigenous Miskito language, but education will continue for their children. How can the US continue illegal sanctions in the face of such devastation? Sanctions only hurt ordinary people, they do not effect the desired "regime change", and besides, sovereign nations get to choose their own presidents, governments and economic systems.

8. Nicaragua has fifth highest gender equality in the world. It is not surprising the first four countries are Iceland, Norway, Finland, and Sweden, but how did Nicaragua get to be fifth? The answer is that they have a mandate to have 50/50 in their legislatures, and if, for example, a president or mayor is male, then the vice-president or vice-mayor will be female. Or vice versa.

9. Daniel Ortega is in for the long haul. Daniel is a controversial figure particularly outside of Nicaragua. He was president in the 1980s when the Sandinista revolution ended the 45-year real dictatorship of the Somoza family. The Sandinistas lost the 1990 elections, as the opposition promised peace from contra violence if elected. However, support for the Sandinistas remained strong in the popular neighborhoods and much of the countryside, so in 2006, Daniel Ortega was elected president again with 38% of the popular vote, re-elected in 2011 with 62% of the vote, in 2016 with 72.5% of the vote, and has the same level of popular support leading up to the elections in November 2021. Nicaraguans like their healthcare system, literacy programs, free higher education, expanded and improved roads and electricity — and they remember how those gains were reversed during the 1990s when the Sandinistas were out of power and services including water were privatized. The large rural population likes land reform, which enables them to work their own small farms. They have hope for a good life for their families. That’s why Nicaraguans re-elect Daniel Ortega, and why Nicaraguans are not joining the caravans migrating to the US the way many other Central Americans are trying to do.

10. Power of a good example. It's an American tradition to end with hope and I want to follow that tradition. There is hope for improvement in the US and our world, though it's unclear whether the US will change significantly through a people's revolution or a capitalist collapse. Even though unfortunately our capitalist media from FOX to PBS line up with military-industrial-complex, we can still learn how the US affects the world, through interesting books like the following.

• War Is a Racket (1935) short book based on speeches by Smedley D. Butler, retired US Marine Corps Major General

Imagine this: life CAN be better for the 99%. The US can certainly have better healthcare, housing, jobs, justice, education and environment, and less student debt, incarcerations, and wasteful military spending. We in the US can raise our expectations, increase pressure on our politicians — including Biden/Harris, who have not shown signs that they will reduce Trump's ramped-up sanctions — and find ways to stop believing the lies.

https://laurawells.org/ten-things-for-us-t...
Add Your Comments
Support Independent Media
We are 100% volunteer and depend on your participation to sustain our efforts!