“It is important to understand TEK not only through the lens of resource management practices but also as a response to settler colonial violence and land dispossession” says Brittani Orona (Hupa), Save California Salmon Board Advisor, “California Indian peoples’ relationship with the environment are suppressed by colonialism and violence of the past and the present. It is imperative to recognize and uplift the resilience of Native TEK practitioners and advocates who fight for Indigenous homelands everyday.”


This series, which will focus on how traditional management and science can help solve environmental crises and help to restore traditional foods in California will supplement the recently released Advocacy and Water Protection in Native California. 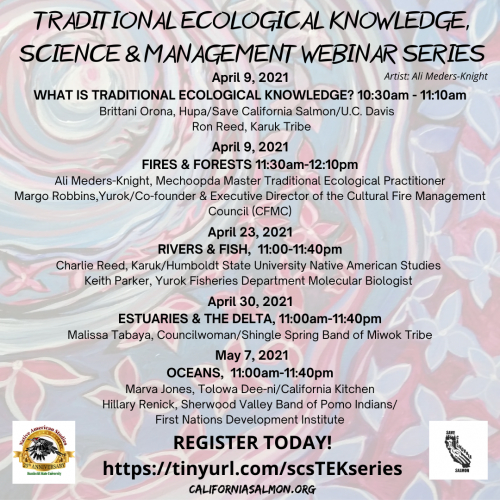 original image (1080x1080)
Charlie Reed, a graduate student at HSU's Native American Studies Department who is of Karuk, Hupa and Yurok descent explained. “Traditional ecological knowledge (TEK) is more than a concept. TEK is an intricate relationship among people, the natural world and spirits from above. A model that builds the bridge of the past to the present and into the future of a well balanced world.”


Native practitioners, cultural leaders, scientists and educators that are leaders in their fields will present on traditional practices and water and land management. They say that in many ways western science and management is just beginning to catch up with traditional knowledge.


This Friday Margo Robbins, the Indian Education Director for the Klamath Trinity Unified School District and the Executive Director of the Cultural Fire Management Council (CFMC) will be presenting on traditional fire. This week CFMC is actively burning on the Yurok reservation as part of a cultural Fire Training Exchange (TREX). Traditional burning by Yurok and Karuk people has received international attention as traditional practices are looked to as a way to cope with California’s increasingly devastating wildfires.


"Fire is an essential part of the ecosystem, it is important for people to understand this, and assume responsibility for learning how to use it in a responsible way. As native people we have been using fire for thousands and thousands of years to keep the land healthy and in balance.” explained Robbins. In a few hundred years, with the arrival of European colonizers this balance has been severely compromised and needs to be set right again. We must all work together to restore this balance."


This series will be hosted on zoom and will be live streamed on Facebook live on Save California Salmon's page. Students, Teachers, NGOs and policy makers and managers are encouraged to participate live and ask questions.


April 30th 11am Estuaries and the Delta Malissa Tayaba Councilwoman


More information about this series and the Advocacy and Water Protection in Native California Curriculum is available at californiasalmon.org. 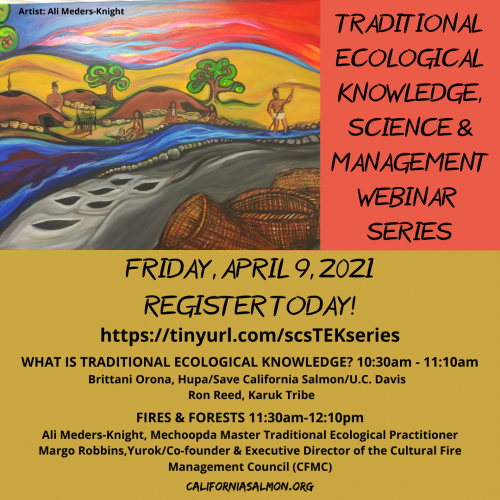 original image (1080x1080)
http://californiasalmon.org
§Salmon and Acorns are traditional foods that managed for by Native people
by Save California Salmon
Wednesday Apr 7th, 2021 11:53 AM 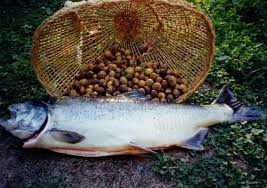 http://californiasalmon.org
Add Your Comments
Support Independent Media
We are 100% volunteer and depend on your participation to sustain our efforts!