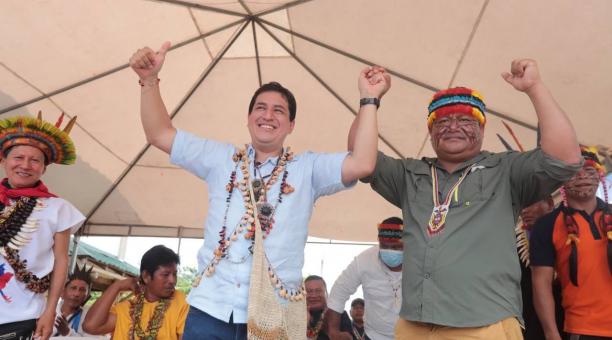 QUITO, ECUADOR – Jaime Vargas, President of Ecuador's largest Indigenous federation, CONAIE, has endorsed left candidate Andrés Arauz for President of Ecuador. Vargas' endorsement of Arauz is a major development and came only a week before the election, scheduled for April 11. The endorsement highlights divisions within Indigenous leadership. It could also tip the election.

Polls indicate a close runoff. Most polls give a slight edge to Arauz, who is a socialist heading a progressive alliance, Union for Hope, but some give the lead to Guillermo Lasso, a pro-capitalist banker and candidate of an alliance of Ecuador's two largest right-wing parties, the Social Christian Party and CREO. A composite of polls give Arauz a three percentage point lead. All polls were taken before Vargas' announcement.
[ https://es.wikipedia.org/wiki/Anexo:Sondeos_de_intenci%C3%B3n_de_voto_para_las_elecciones_generales_de_Ecuador_de_2021 ]

During his announcement on Saturday Vargas said, “I'm here in my capacity as the head of Ecuador's Indigenous movement...Mr. Andrés, or President as they are already calling you, we're all in agreement on this, your proposals have the full support of the Indigenous movement,” reported People's Dispatch.
[ https://peoplesdispatch.org/2021/04/05/rising-tensions-ahead-of-second-round-elections-in-ecuador/ ]

Thanking Vargas, Arauz said, “We are building national unity and putting Ecuador first. We must work towards the plurinational state, truth, justice and reparations.” (Ecuador's constitution proclaims the country a plurinational state and recognizes fourteen Indigenous nations within Ecuador.)

In endorsing Arauz, Vargas broke with a decision CONAIE made at a recent meeting to advocate a null vote in the Presidential runoff, (Ecuadorian voters have the option to vote for none of the above.)

Vargas' endorsement also differs sharply from the position of Yaku Perez, the Presidential candidate of the Indigenous party, Pachakutik, which is connected to CONAIE. Perez decided not to make an endorsement and has charged that it is illegitimate because fraud kept him out of the runoff against Arauz. Perez has not, however, shown enthusiasm for the null vote campaign. Verna Cedeño, Perez's Vice-Presidential running mate, has endorsed Lasso. Vargas criticized those in Pachakutik that support the right.

No small number of Indigenous leaders sharply denounced Vargas's endorsement of Arauz as a betrayal. They charged that Vargas no longer represents most Indigenous. A number called for Vargas to be replaced as President of CONAIE.

ECUARUNARI, a regional federation within CONAIE, slammed Vargas in a statement,  "Today we see with enormous indignation how Jaime Vargas, president of CONAIE (extended), tries to mortgage the historical struggle of the indigenous movement of Ecuador with an alleged support to the presidential candidacy of Andres Arauz."
[ https://www.vistazo.com/seccion/politica-nacional/leonidas-iza-y-la-ecuarunari-tambien-le-dan-la-espalda-jaime-vargas-y ]

Despite the chorus of criticism, Vargas is not isolated. Another federation of Indigenous and Black campesinos, FENOCIN, has endorsed Arauz, as has a federation of Evangelical Indigenous, FEINE. There are also Indigenous supporters of the Union for Hope, and Citizen's Revolution, the movement Arauz comes out of.

Vargas was a prominent leader of protests that paralyzed Ecuador in 2019 in opposition to neoliberal austerity measures. The protests succeeded in forcing President Moreno to back down at that time. Since then, Moreno has continued austerity measures and has cut a third of the budgets for many government programs, including health care. Lasso would continue and even increase neoliberal economic measures and government austerity, while Arauz seeks to change direction and rebuild government services and re-hire laid off government employees.

Ecuador has been hit very hard by COVID-19 and a steep economic recession. A study found that more than half of Ecuadorians are now living in poverty, while another found that only three adults in ten has a regular job.
[ https://www.telesurenglish.net/news/Over-52-of-Ecuadoreans-Fell-Into-Poverty-in-2020-20210101-0009.html ]