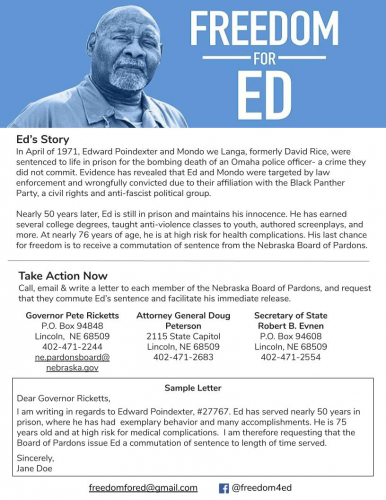 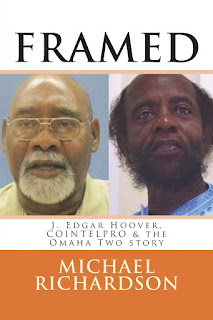 Written by the Jamal Journal

"Fifty years ago, April 1, 1971, was the opening day of the Patrolman Larry Minard murder trial in Omaha, Nebraska. Prosecutor Arthur O’Leary, Deputy Douglas County Attorney, used the opening statement to tell the jury false information. Co-defendants Edward Poindexter and David Rice (later Wopashitwe Mondo Eyen we Langa) were Black Panther leaders, officers in the local National Committee to Combat Fascism. O’Leary sought the death penalty in Nebraska’s electric chair for the two men who had been subjects of a year-long harassment campaign by the Omaha Police Department. Officer Minard was killed on August 17, 1970 when a bomb exploded at a vacant house where he and other policemen were searching for a screaming woman as reported by an anonymous 911 caller. The Black Panthers were blamed for the crime and the two leaders charged with murder. The bomb had been planted at the vacant house by a fifteen year old Panther wannabe, Duane Peak."

In our interview conducted earlier this week, author Michael Richardson discusses the role of the FBI's infamous COINTELPRO in the frameup of the Omaha Two and provides an important update on Ed Poindexter's urgent health situation. Richardson also explains how you can help Ed Poindexter, an elder in poor health who is a 50-year victim of an obvious and well documented COINTELPRO frameup. We highly recommend reading Michael Richardson's book to learn more about this extreme injustice that needs to end immediately. Free Ed Poindexter now! 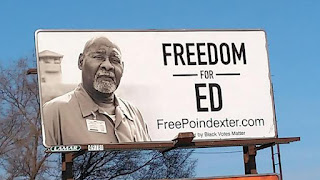 Jamal Journal:  When did you first hear about the case of the Omaha 2?

Michael Richardson:  I lived in Omaha, went to high school and college there. I was also a VISTA volunteer in Omaha and came to be friends with David Rice, later Wopashitwe Mondo Eyen we Langa, who was convicted along with Edward Poindexter of murdering a police officer. I attended the 1971 trial.

This case of injustice has haunted me all my adult life.

Jamal Journal:  Why did you decide to start researching and writing about the case?

Michael Richardson:  At the trial they made it seem like the two men, Black Panther leaders, were guilty. I wondered about their innocence for thirty-five years and one day wrote to my old friend Mondo in prison. He didn't even remember me. I guess he was a bigger person in my life than I was in his. Anyway, he wrote back and said if I was interested in learning about his case the only rule was to follow the truth.

Ten years of research and writing later, I was able to publish FRAMED: The J. Edgar Hoover, COINTELPRO, and the Omaha Two story.

Jamal Journal:  Through your research, what role did you find that COINTELPRO played in their case?

Michael Richardson:  I had never heard of COINTELPRO until I started digging into the story. I guess I was too busy with other things when it was revealed. Needless to say, I was shocked to learn what I had missed.

The size and scope of the clandestine counterintelligence operation was huge. By the time of the Omaha case, forty percent of the Federal Bureau of Investigation budget went to support the secret agenda of Director J. Edgar Hoover.

In the Omaha case, Hoover ordered the FBI Laboratory to withhold a report on the identify of an anonymous 911 caller who lured Patrolman Larry Minard to his death. Hoover's priority was to destroy the Black Panthers, not catch police killers. The COINTELPRO tampering with the murder investigation and trial are well documented in once-secret FBI memoranda.

Jamal Journal:  We are saddened to hear that Ed Poindexter is in such poor health. What is the latest news in Ed's case?

Ed Poindexter:  My friend Mondo died in prison in March 2016. Ed Poindexter, whom I have come to know from prison visits and correspondence, is indeed in poor health.

A half-century in prison has taken a heavy toll on Ed's health. Ed is a very private person who does not seek sympathy from anyone. Mr. Poindexter is a proud man and what he seeks is justice. Presently Ed has a pending application to the Board of Pardons to consider a commutation of sentence.

However, the three-member panel, consisting of the Governor, Attorney General, and Secretary of State, infrequently meets and are planning on reviewing dozens of pardon requests to restore rights of persons already released from jail before they take up Ed's case.

Simply put, they want him to die in prison.

Jamal Journal:  What are the different ways that our readers can support Ed?

Michael Richardson:  Ed likes to get mail.  His health, vision, etc. are such that he does not answer many people but he still likes to hear from the outside world. His mailing address is:

People can call or write the Board of Pardons to request them to adopt a more reasonable and responsible approach to their priority scheme during this time of the Covid virus which is raging through America's prisons and hear commutation requests before pardons.

The Board of Pardons is composed of Governor Pete Ricketts, Attorney General Doug Peterson and Secretary of State Robert Evnen, Nebraska Board of Pardons, PO Box 95007, Lincoln, Nebraska, 68509, Phone (402) 540-2906 or Email ne.pardonsboard@nebraska.gov.

Jamal Journal:  What is the best way for our readers to learn more about your book and to read your articles about the case?

Michael Richardson:  More information on Ed Poindexter is available in my book FRAMED: J. Edgar Hoover, COINTELPRO & the Omaha Two story, in print edition at Amazon and in ebook format.  Portions of the book may also be read free online at NorthOmahaHistory.com.  The book is also available to patrons of the Omaha Public Library.

Jamal Journal:  Anything else to add for the interview?

Michael Richardson:  Ed's COINTELPRO tainted trial was fifty years ago.  To most people that is ancient history, for many that was before they were even born.  Yet for Ed, caged to the past, the prison experience is a fresh new shock every time he wakes up, every time an order is given, every time he is told what to do or where to go.  Ed told me during one visit, “You never get used to it.”

For Ed Poindexter the past is his present, let us all help to give him a future with freedom. It is long past time to end this wrongful imprisonment.

--The Jamal Journal is published by the uncompromising International Concerned Family and Friends of Mumia Abu-Jamal. Visit www.jamaljournal.com to learn more about our website and newspaper. 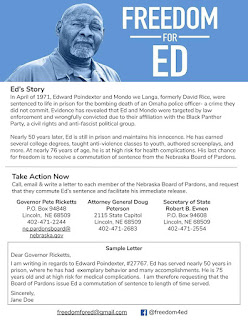 (Click on the flyer to view a larger version.)
https://jamaljournal-politicalprisoners.bl...
Add Your Comments
Support Independent Media
We are 100% volunteer and depend on your participation to sustain our efforts!