Add an Event
Newswire
Calendar
Features
Home
Donate
From the Open-Publishing Calendar
From the Open-Publishing Newswire
Indybay Feature
Related Categories: Central Valley | Anti-War | Immigrant Rights | Racial Justice
Mural for Deported Vets Unveiled in Fresno
by Peter Maiden
Wednesday Mar 31st, 2021 2:01 PM
A mural for deported vets was pasted onto a wall on an alley near Fulton Street in Fresno on March 28. In the photo Maria Rosales views the mural. She is the owner of the store, 3 Hermanos, which provided the wall for the mural. 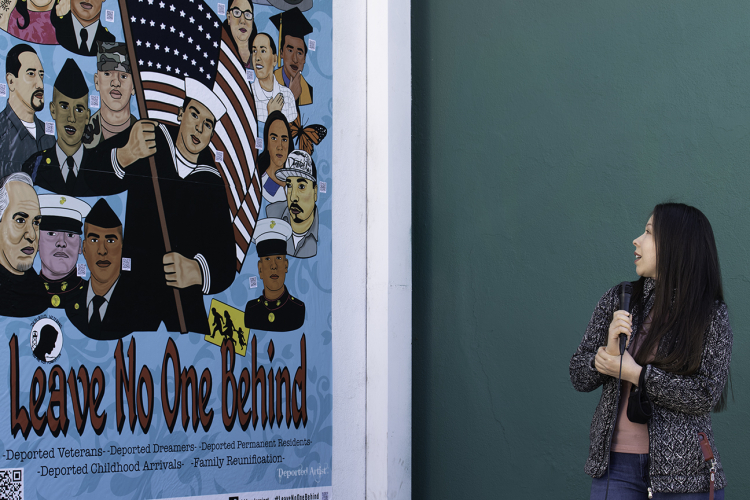 original image (1296x864)
A mural prepared by the Leave No One Behind Mural Coalition was unveiled March 28 in Homerun Alley, behind the 3 Hermanos store that has its storefront at 927 Fulton Street.

The mural depicts deported veterans, many of whom thought they would achieve a favorable immigration status because of their service. That turned out not to be true, and some are without their families now as they reside in foreign countries unable to return to the United States.

The artist who created the mural was himself deported. He signs artwork “Deported Artist.” He addressed the small crowd by phone from Tijuana.

Each figure in the mural has a QR code for the viewer with a smartphone to see the story of the person depicted. The mural is on plastic and was pasted to the wall.

A second mural was pasted up the same day in the Tower District, at Let’s Roll Fresno, 403 W. Olive Street.

The Leave No One Behind Mural Coalition has some ideas for how to turn the situation of deported vets around. They suggest the following actions:

“Pressure President Biden to pass an Executive Action or a series of actions as outlined by Senator Tammy Duckworth to begin the process of repatriating deported veterans.