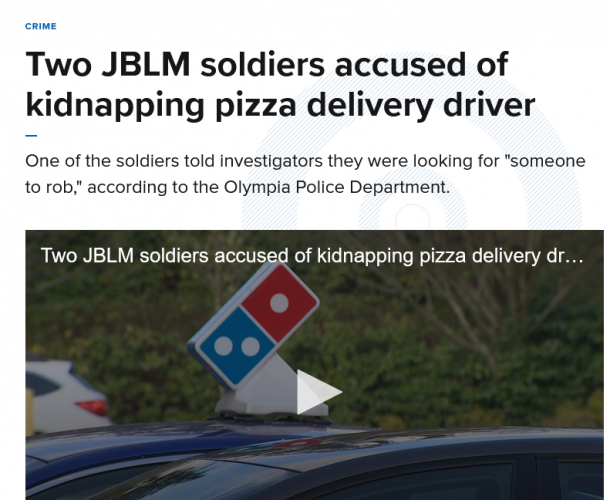 original image (791x648)
It seems like every couple of weeks there is a report of another threat to our community from Joint Base Lewis-McChord (JBLM), the military base near Tacoma, WA. Now we read that JBLM Soldiers have KIDNAPPED a guy who was just trying to deliver a pizza. The violence and corruption on JBLM has continued to increase since late-2017/early-2018 and has now reached a point where it is completely out of control.

Not only does JBLM pose a significant threat to the surrounding community, but that threat is increased because of the corrupt and abusive JBLM police department that covers up crimes and retaliates against those who report wrongdoing on the military base. There are multiple reports of JBLM Police retaliating against whistle blowers and manufacturing evidence to target those who report illegal activity on the base, while covering up on-going criminal activity by its senior personnel.

This corruption within the JBLM Police has led to the increasing violence we see spreading throughout the surrounding civilian community...

According to the Olympia Police Department, Daniel Cano-Real, 19, told investigators that he and John Medina, 20, were driving around the city's neighborhoods late Saturday night looking for someone to rob.

Police said Cano-Real confessed to forcing a 19-year-old pizza delivery driver into their car, at gunpoint.

About 30 minutes later Olympia police said an officer found the delivery driver zip-tied in the backseat after pulling over the car.
An officer said he spotted the car driving the wrong way on State Avenue, a one-way street in downtown Olympia.

The victim had a stab wound and red marks around his hands, but was not seriously injured.

Citing the danger to the community, a Thurston County judge held both of the defendants on $150,000 bail."