Add an Event
Newswire
Calendar
Features
Home
Donate
From the Open-Publishing Calendar
From the Open-Publishing Newswire
Indybay Feature
Related Categories: California | Government & Elections
Unrelenting e-mails from Gov. Newsom
by CA Voter
Saturday Mar 27th, 2021 7:27 PM
Unrelenting e-mails from Gov. Newsom. It's enough to make me want to support his recall!
I have been receiving unrelenting e-mails, which I never signed up for, from Gov. Newsom's campaign to remain in office. They are being bank rolled by the Resnicks. I have completed the "unsubscribe" function three times, including a reason, to no effect! Is anyone else having this problem? Below is a sample of one of the e-mails:

I am writing to let you know that we recently launched our campaign to stop the Republican recall attempt in California. I am not going to take this recall attempt lying down. I'm going to fight because there's too much at stake in this moment.
And today, I am asking you to join me:
Please add your name to say you oppose the far-right Republican recall effort in California. It is critical you make your voice heard from the start of this effort.
First and foremost, I need you to know I am not going to be distracted from the critical work we have to move us forward in California. That means getting more vaccines in people's arms, more people back to work, and more kids back in the classroom.
But that means I need your help defeating this recall effort.
And let's call it what it is: it's a partisan, Republican recall -- backed by the RNC, anti-mask and anti-vax extremists, and pro-Trump forces who want to overturn the last election and have opposed much of what we have done to fight the pandemic.
If they are successful, it would mean risking the progress we are making to end the pandemic. We can't let that happen.
California cannot afford to be sidetracked by partisan political games. So we'll fight this recall for the reason I am fighting to get every Californian vaccinated -- because ending this pandemic as quickly as possible is too important to get delayed by Trump loyalists and far right-wing Republicans.
But I cannot do that alone.
Add your name: say you oppose the Republican recall effort in California. This is important.
Thank you for joining me in this effort. It means a lot to know that we're in this together.
All my best,
Gavin


PAID FOR BY STOP THE REPUBLICAN RECALL OF GOVERNOR NEWSOM.
Committee major funding from: California Democratic Party, Lynda Resnick, Stewart Resnick
This email was sent to: gilbertconsult [at] yahoo.com. Emails are a very important way for Team Newsom to keep in touch with others who oppose the right-wing Republican recall attempt. If you want to unsubscribe, that would be unfortunate, but please click here to unsubscribe. To make a donation to help Governor Newsom stop this recall attempt, please click here.

Add Your Comments
§Good Emails; This Election will soon pass
by Stop Nazi Republican Party
Saturday Mar 27th, 2021 7:37 PM
You must be a registered Democrat who gave your Email on your voter registration card, which is not required. We are also not required to give a phone number. Neither existed when the Constitution was written. In any event, since the unsubscribe does not work, just hit the delete key, or better yet, forward them to everyone you know as we need to maximize voter turnout to stop the Nazi Republican Party from installing an anti-minimum wage, anti-abortion, pro-Trump governor immediately if the recall succeeds. Recalls are always low voter turnout elections favoring the Nazi Republican Party. Some things we have to endure for a worthwhile goal. It is not much as your life will continue quite well. Thank you for your patience. All of our lives are on the line if the recall succeeds as only a Nazi Republican can and will be immediately installed. Everyone: Vote No on the Recall. Hold the line, for now is the time!
Add a Comment
§I am not a registered Democrat...
by CA Voter
Saturday Mar 27th, 2021 10:29 PM
...and have not given my e-mail address to any political organization.
Add a Comment
§UFCLP Newsom Statement-The Pandemic, Newsom, The Recall & The Working Class
by United Front Committee For A Labor Party
Tuesday Mar 30th, 2021 7:50 PM 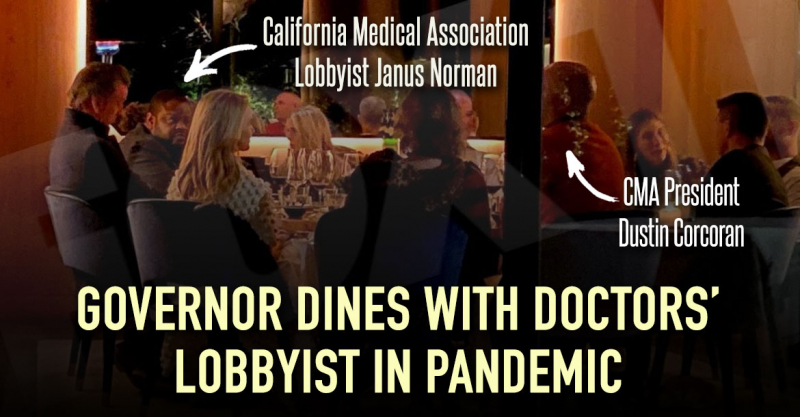 If nothing else, the COVID-19 pandemic has clearly shown us that capitalism and its spokesmen, the politicians, even in the face of hundreds of thousands of deaths, continue to base policies on the drive for profit as opposed to protecting people from the illness. It has also demonstrated the fact that working class people need our own political party. The COVID-19 pandemic is raging in California, with tens of thousands of deaths, and has caused a complete breakdown of our healthcare system. California is run by a Democratic governor and has a 2/3’s supermajority in the legislature, making them in charge of the state, and making them culpable for the chaos and out-of-control pandemic. Governor Newsom, in fact, froze hiring of new Cal-OSHA inspectors, leaving the bosses in control. Workers are dying at Foster Farms, at hospitals, and on the docks of Los Angeles. In Los Angles alone, over 700 infected longshore workers have been documented; among those, 12 ILWU members have died. The shipping companies, like other employers, have also refused to report the number of COVID-19 cases to the public health department although they are required to by law.

As further evidence of his corruption, Governor Newsom has allowed Elon Musk and Tesla to operate their massive factory, with more than 10,000 workers, while small businesses are shut down with shelter-in-place orders. The Alameda Health Department was put in charge of enforcing the health and safety rules at Tesla, and they sent the Fremont Police Department to enforce the rules instead of Cal-OSHA. The plant has become a virus vector as many workers are bussed into confined spaces from the Fremont plant to the Central Valley because of the high cost of housing in the Bay area. Newsom has allowed Musk, who is now the second richest man in America, to profit while his workers are contaminated and have no real health and safety protection on the job. These flagrant violations of health and safety rules are another example of the criminal negligence of this governor to protect workers on the job. Indeed, after a year of deepening COVID-19 contamination and deaths of front-line workers, disproportionately people of color, there are still less than 200 Cal-OSHA inspectors for California’s 18 million workers. There are more Fish and Game inspectors than Cal-OSHA inspectors in the state, and Newsom put on a hiring freeze for new Cal-OSHA workers at the start of 2020, despite the pandemic. Healthcare workers, after more than a year, still do not have enough PPE, gowns, or other safety equipment, and Newsom is pushing to lower the ratio of nurses to patients, giving already over-strapped nurses more patients to care for. Moreover, Newsom refuses to implement single payer healthcare and has allowed Kaiser and other private hospitals to terminate members in a global pandemic. Violating his own rules, he went to a dinner in Napa at the French Laundry, spending over $15,000 on a wine tab and dinners costing more than $500 each. His private party was paid for by a Hospital Association lobbyist, and he continues to do their bidding, allowing hospitals to reuse masks and to override health and safety conditions by lowering the nurse-to-patient ratio. His carelessness will inevitably lead to more deaths of patients and healthcare workers. The current breakdown of California’s healthcare system is a direct result of the privatization and deregulation pushed by Newsom and former governor Jerry Brown, who sought to attack the pensions of public workers.

In addition to his inept handing of the healthcare system, Newsom is also bungling reopening the education system. Newsom’s and SF Mayor London Breed’s demands that teachers go back to schools without proper PPE and other health and safety protections is not just an attack on the wellbeing of the teachers, students, staff, and their families, but is also another union-busting effort to blame workers for this complete failure of the capitalist system during the pandemic. Further evidence demonstrating the Newsom administration’s corruption and inefficacy include the failure of the Department of Motor Vehicles to provide timely services with enough staff support for registrations and the $11 billion that disappeared at the Employment Development Division (EDD). Workers in California are going bankrupt and homeless because of the corruption and incompetence of Newsom and his cronies who run the state. The growing anger that is building up in California is like the conditions that led to the recall of Gov. Grey Davis, who wrecked the energy market in California by allowing Enron and other private hedge companies to take over the energy market. Replaced by Republican Arnold Schwarzenegger, Davis allowed PG&E executives to get away with criminal negligence, and his Public Utility Commission was stacked with corporate insiders who have covered up the massive malfeasance and crimes by PG&E during the Camp Fires and others. Newsom has and will continue to privatize at the expense of the working class just like his predecessors, both Democrat and Republican.

Newsom, giving a no-bid $200 million contract to the notorious Tetra Tech company, is again another example of the systemic corruption of his administration. As mayor of San Francisco, Newsom pushed for the development of condos on the contaminated, radioactive, former military bases at Hunters Point and Treasure Island, despite the massive fraud by Tetra Tech and Test America. He also encouraged the illegal firing of whistleblowers, who exposed both the $1 billion economic fraud and the illness and deaths of workers, including many black and poor community members, in Hunters Point. He even awarded Tetra Tech a $200 million non-competitive contract in the Camp Fire clean-up, even though two Tetra Tech managers were convicted and went to Federal prison for covering up fraud and retaliating against Tetra Tech whistleblowers.

Newsom and the Democrats could do more about the pandemic, but they are choosing not to because they are in the pockets of the capitalists. Instead of imposing a capital tax on California’s 165 billionaires, including Mark Zuckerberg and Larry Ellison, Newsom and the state legislature let them pay nothing for this crisis to compensate workers and small businesses that are going bankrupt. As opposed to the $3.9 trillion gained in new corporate wealth, workers during this pandemic have lost $3.7 trillion, and yet Newsom and the Democrat-controlled legislature refuse to impose any capital or wealth tax on these robber barons. In a similar manner as implemented against Davis, the coming recall is being used by the Republicans to expose Newsom. It will likely be successful. Along with the millions of workers who have lost their jobs, there are many small businesspeople who are going bankrupt. There is also a growing danger of fascism as these forces mobilize and organize. Make no mistake -the Republicans won’t

To better achieve these aims, we call for the formation of a democratic labor party that will end healthcare privatization with a constitutional clause stopping all outsourcing and deregulation, protecting working people instead of catering to a state dictated by billionaires. Our unions need to break their relationship with the Democrats and support a party for, and organized by, working people. The Democrats have shown the working people of California that even amidst a massive pandemic (that they have exacerbated), they are still beholden to the billionaires. Now is the time to build a political alternative to the Democrats. They have proven that they will not save workers, but in fact, they will let millions of more people die for profit.

https://foramasslaborparty.wordpress.com/a...
Add a Comment
Support Independent Media
We are 100% volunteer and depend on your participation to sustain our efforts!