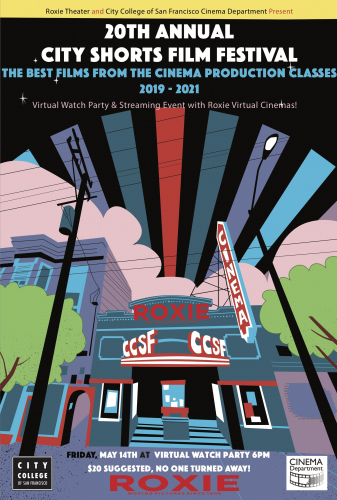 City Shorts stands out as one of most unique film festivals in the Bay Area as one of the most prolific cinema production schools in San Francisco, film genres include narrative, experimental and documentary. The festival has screened early work by award-winning filmmakers such as Jim Granato, Joe Talbot (Last Black Man in S.F.), Tina Takemoto (PHd, Experimental film and comedy improv), David Weisman, (Emmy Winning Documentary maker), Sam Berliner, (Seattle Film Fest), Amy Hicks, and Muayad Alayan (Palestinian films), to name just a few of our successful students working professionally in the film industry!
You are invited to experience the spirit of Bay Area independent filmmaking while raising funds for two vital institutions in San Francisco. The City College of San Francisco’s Cinema Department nurtures talented filmmakers from the ground up, with a curriculum that covers everything from film studies to advanced cinematography, and directing. CCSF student films have screened around the world after premiering at City Shorts. Students compete for prizes donated by BAVC, JCX Expendables, SF-FILM, LIttleGiant, and MORE, ensuring this is just the beginning of their film production career.

END_OF_DOCUMENT_TOKEN_TO_BE_REPLACED
Added to the calendar on Tue, Mar 23, 2021 1:11PM
Add Your Comments
Support Independent Media
We are 100% volunteer and depend on your participation to sustain our efforts!