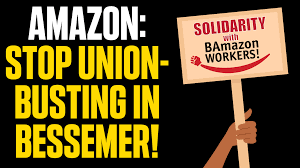 Journalist, political prisoner and revolutionary, Mumia Abu-Jamal, is recovering from COVID-19 and is back in general population after completing quarantine in the prison infirmary. Mumia’s emergency-transfer to a hospital outside the prison on Sat, Feb 27, came less than 24 hours after supporters flooded the prison and Philadelphia DA’s office with emails and calls expressing concern about the health of the veteran black panther. His movement-appointed doctor Ricardo Álvarez, is quoted saying “The only acceptable treatment is Mumia’s Freedom.” His supporters are calling for the freedom of all Political Prisoners and all prisoners over the age of 50 and those with pre-existing conditions.
Listen to host Johanna Fernández’ (WBAI) full interview with Dr. Ricardo Álvarez here:\
Get involved in the fight for justice for political prisoners:

Then, we hear from workers, whose labor –under slave-like conditions –is making Amazon billions in profits. And we hear from organizers who are trying to unionize the workers and the voices of workers who are speaking out in support of unionizing.

**Aleta Alston, a former Amazon worker, spoke at a rally against the major union busting law firm Morgan Lewis. Amazon hired Morgan Lewis to help it prevent unionization. The firm has raised $2.3 billion from companies around the world to stop workers from organizing.

The control over workers at Amazon is suffocating, this according to former Amazon worker Adrienne Williams. She spoke to Pacifica’s Steve Zeltzer about what the conditions are and why workers are fed up.

Additional links:
Amazon Worker Testifies at Hearing
https://www.c-span.org/video/?509934-1/senate-budget-hearing-income-inequality-unionize
Amazon Warehouse Workers Reveal Brutal Working Conditions
https://www.youtube.com/watch?v=HTOxxCRqpLM&feature
**In Burbank, CA, a campaign to tax Amazon has been under way. KPFK’s Elliot Avila talked to Michael Brae, union trustee, and Konstantine Anthony, socialist-endorsed Burbank City Councilmember about the Tax Amazon Burbank campaign.
https://m.facebook.com/taxamazonburbank/
Interested people can email taxamazonburbank [at] gmail.com.\
The fight to organize workers in the South is now critical to all working people in the US. Many US companies and other multinationals from around the world have moved to the South to avoid unionization. But now there is a growing strike wave that is linking up with the Black Lives Matter movement. Saladin Muhammed is a former organizer with the United Electrical, Radio and Machine Workers of America, and now with the Southern Workers Assembly. We hear an excerpt from the panel – Black Workers in Alabama on the Front Lines of History: From Hammer & Hoe to #BAmazonUnion with scholar-activist Dr. Robin D.G. Kelley & Saladin Muhammed.
**Retail, Wholesale and Department Store Union organizers at the Amazon plant in Bessemer, Alabama have fought to educate and mobilize the community. This segment aired on the Heartland Labor Forum on KKFI Kansas City Community Radio 90.1 FM on March 11. You can find the complete interview here .\
More information on Bessemer Amazon Workers Organizing at southernworker.org. \
Show Credits:

About COVID, RACE, AND DEMOCRACY:

The show currently airs Mondays at 2pm CT on KPFT 90.1FM in Houston TX, Mondays at 4pm ET on WBAI 99.5FM in New York, and Wednesdays at 6pm on WPFW 89.3FM in Washington DC, as well as on several Pacifica Network affiliated stations across the United States. 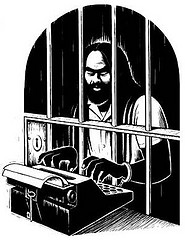 Mumia Abu-Jamal is a member of CWA-NABET and is one of the most important journalists in the world. He is now in. a struggle for his life with covid and continued torture by prison authorities.
https://covidtaskforce.pacifica.org/2021/0...
Add Your Comments
Support Independent Media
We are 100% volunteer and depend on your participation to sustain our efforts!