The international campaign to free Mumia Abu-Jamal launched by the International Workers Committee Against War and Exploitation, For a Workers International (IWC) is under way.

The IWC Campaign Appeal, issued on March 6, has now received support from labor and democratic rights organizations and activists in countries the world over. It is our contribution to the mass-based campaign to free Mumia.

The three demands being relayed by the IWC to authorities in Pennsylvania [see people to contact below] are the following:

• Transfer Mumia to a hospital for proper medical care!

We are reprinting below an article published in the March 17, 2021 issue of Tribune des Travailleurs (Workers Tribune), which provides some initial information on the statements calling to free Mumia from unions worldwide.

You will also find attached some of the initial responses to this campaign in numerous countries from trade union bodies, representatives of workers’ and community organizations, and activists from all political horizons. This is a first list; reports from many more countries are on the way.

Many thanks, in advance,

Mumia Abu-Jamal needs to be released from prison and sent to a hospital for proper medical attention.

But that is not all. Mumia needs to be released from prison altogether, based on his documented innocence and his medical condition, which in itself should be sufficient to warrant his release.

• Transfer Mumia to a hospital for proper medical care!

Please send copies of your email messages — with your name, organization and country — to owcmumbai2016 [at] gmail.com and SuzanneWRoss [at] aol.com.

The Editorial Board of
The Organizer Newspaper
(http://www.socialistorganizer.org)

“Now, right now, we need to free Mumia Abu-Jamal!” This is the cry of the U.S. coalitions fighting to save the life of Mumia Abu-Jamal, 66, who has just tested positive for COVID-19 in prison. Mumia suffers from congestive heart failure and hepatitis C. As his physician, Ricardo Alvarez, says: "Freedom is the only possible treatment!”

Statements demanding that Mumia be released immediately and hospitalized are being gathered worldwide.

“During the dark days of Apartheid,” reads a statement by the 300,000-member National Union of Metalworkers of South Africa (NUMSA), “the liberation movement was supported by progressive organizations putting pressure on the government to release political prisoners. It is our turn now to free Mumia Abu-Jamal.”

For their part, the International Federation of Journalists, the National Writers Union (U.S.) and the SNJ-CGT (France) have issued a call for "the immediate hospitalization of Mumia so that he can receive proper care by independent professionals, with his release as soon as he is able, so that he can rejoin his family.”

The Independent Democratic Workers Party of France (POID), as well as the International Workers Committee Against War and Exploitation, For the Workers International (IWC), have issued similar statements, addressed to Pennsylvania Governor Tom Wolf [see attached].

To obtain a copy of a “Model Letter” from the Free Mumia coalitions that has been published in the IWC Weekly Newsletter, please write to: owcmumbai2016 [at] gmail.com.
https://jamaljournal-movement.blogspot.com...
§Statement from Brazil
by Reposted by the Jamal Journal
Friday Mar 19th, 2021 2:40 AM 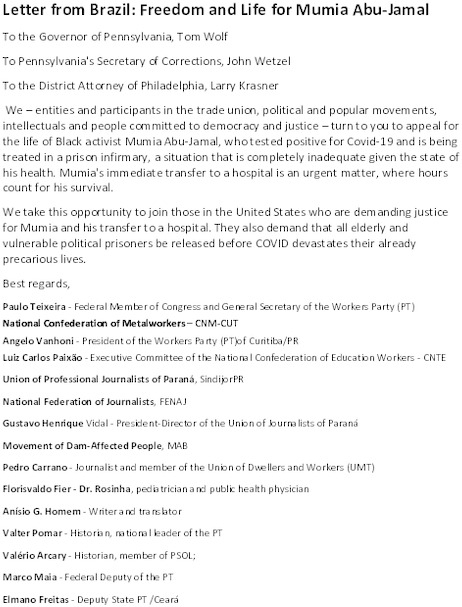 To the Governor of Pennsylvania, Tom Wolf
To Pennsylvania's Secretary of Corrections, John Wetzel
To the District Attorney of Philadelphia, Larry Krasner

We – entities and participants in the trade union, political and popular movements, intellectuals and people committed to democracy and justice – turn to you to appeal for the life of Black activist Mumia Abu-Jamal, who tested positive for Covid-19 and is being treated in a prison infirmary, a situation that is completely inadequate given the state of his health. Mumia's immediate transfer to a hospital is an urgent matter, where hours count for his survival.

We take this opportunity to join those in the United States who are demanding justice for Mumia and his transfer to a hospital. They also demand that all elderly and vulnerable political prisoners be released before COVID devastates their already
precarious lives. 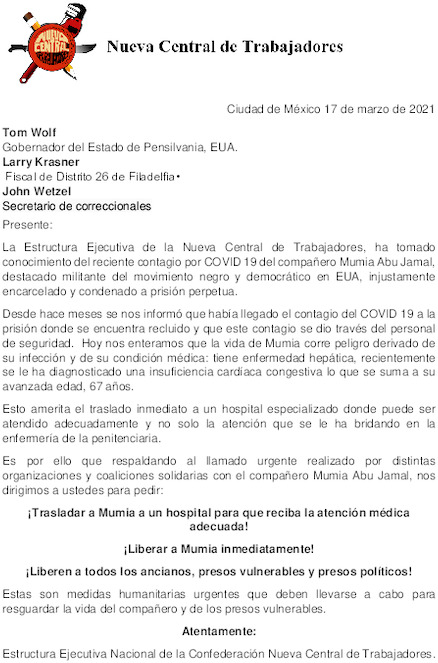 §Support from the Philippines for Mumia
by Reposted by the Jamal Journal
Friday Mar 19th, 2021 2:53 AM 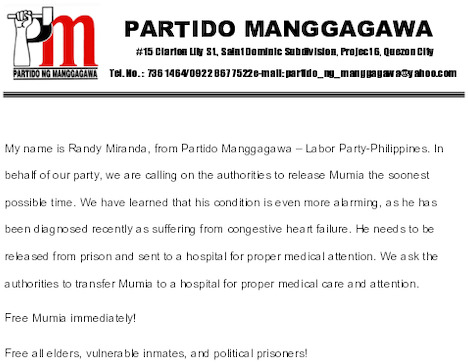 Download PDF (133.6KB)
My name is Randy Miranda, from Partido Manggagawa – Labor Party-Philippines. In behalf of our party, we are calling on the authorities to release Mumia the soonest possible time. We have learned that his condition is even more alarming, as he has been diagnosed recently as suffering from congestive heart failure. He needs to be released from prison and sent to a hospital for proper medical attention. We ask the authorities to transfer Mumia to a hospital for proper medical care and attention.

Free all elders, vulnerable inmates, and political prisoners!
http://www.jamaljournal.com
§POID from France
by Reposted by the Jamal Journal
Friday Mar 19th, 2021 3:02 AM 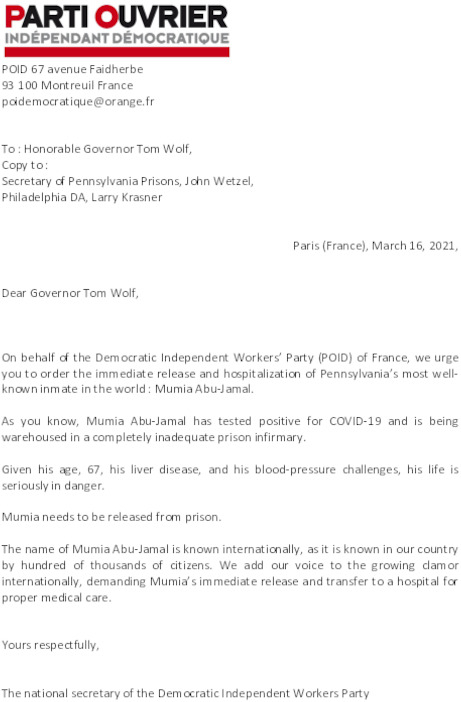 On behalf of the Democratic Independent Workers’ Party (POID) of France, we urge you to order the immediate release and hospitalization of Pennsylvania’s most well known inmate in the world : Mumia Abu-Jamal.

As you know, Mumia Abu-Jamal has tested positive for COVID-19 and is being warehoused in a completely inadequate prison infirmary.

Given his age, 67, his liver disease, and his blood-pressure challenges, his life is seriously in danger. Mumia needs to be released from prison.

The name of Mumia Abu-Jamal is known internationally, as it is known in our country by hundred of thousands of citizens. We add our voice to the growing clamor internationally, demanding Mumia’s immediate release and transfer to a hospital for proper medical care.

Yours respectfully,
The national secretary of the Democratic Independent Workers Party
http://www.jamaljournal.com
Add Your Comments
LATEST COMMENTS ABOUT THIS ARTICLE
Listed below are the latest comments about this post.
These comments are submitted anonymously by website visitors.