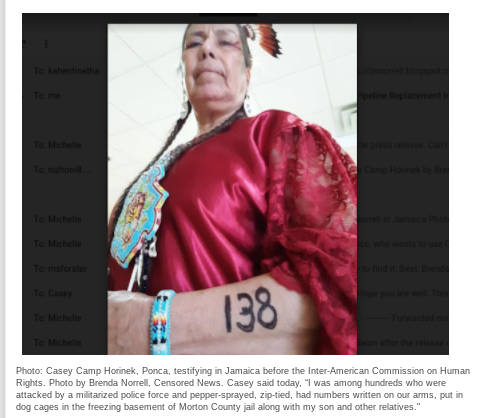 Water Protector Legal Collective, formed at Standing Rock, is being attacked by Energy Transfer Partners and Dakota Access Pipeline, with a subpoena, aimed at seizing confidential records, and meant to intimidate.

WPLC, led by Native American women, is challenging the attack.

"Energy Transfer Partners (ETP), the company behind the Dakota Access Pipeline (DAPL), has served WPLC with a SLAPP subpoena seeking access to confidential records and legal documents that are protected by the First Amendment and attorney-client privilege. WPLC has filed an objection to this subpoena in North Dakota District Court and will continue to fight it," WPLC said today.

WPLC said today, "In 2017, ETP filed a SLAPP (Strategic Lawsuit Against Public Participation) against Greenpeace and other organizations in federal court, alleging, among other things, that they were involved in a 'campaign of misinformation against ETP, that 'intended to, and did, incite violence, property destruction, and criminal sabotage designed to stop the construction and operation of DAPL.' When the federal court dismissed the case in 2019, ETP re-packaged its arguments and filed a new SLAPP in state district court; the WPLC subpoena stems from the latter ongoing case."

WPLC said, "Corporations that file SLAPPs send a clear message to organizations and activists intended to silence resistance: “If you speak out against us, we’ll take you to court.”

"SLAPP suits and related subpoenas seeking information, are an abuse of power by extractive industries and large oil companies trying to intimidate those who advocate for justice and the environment."

Casey Camp-Horinek, a 70-year-old Elder of the Ponca Nation and WPLC board member, recalls, "I was among hundreds who were attacked by a militarized police force and pepper-sprayed, zip-tied, had numbers written on our arms, put in dog cages in the freezing basement of Morton County jail along with my son and other relatives. Thirty-seven women were crammed into the cage I was in with no food or water, many reeking of pepper spray, sick and injured. All this because we stood in prayer. We have survived over 500 years of these tactics and we will not be silenced. We stand strong together on behalf of our one true Mother, the Earth.'” 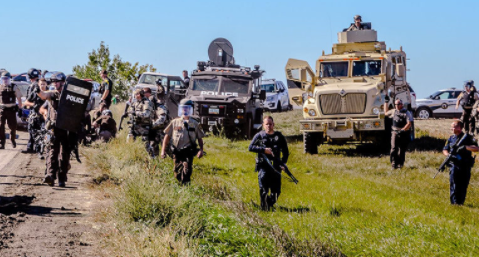 Militarized police attacked and arrested Standing Rock Water Protectors in 2016 as they prayed for the protection of the water of the Missouri River from the Dakota Access Pipeline.
https://bsnorrell.blogspot.com/2021/03/wat...
Add Your Comments
Support Independent Media
We are 100% volunteer and depend on your participation to sustain our efforts!