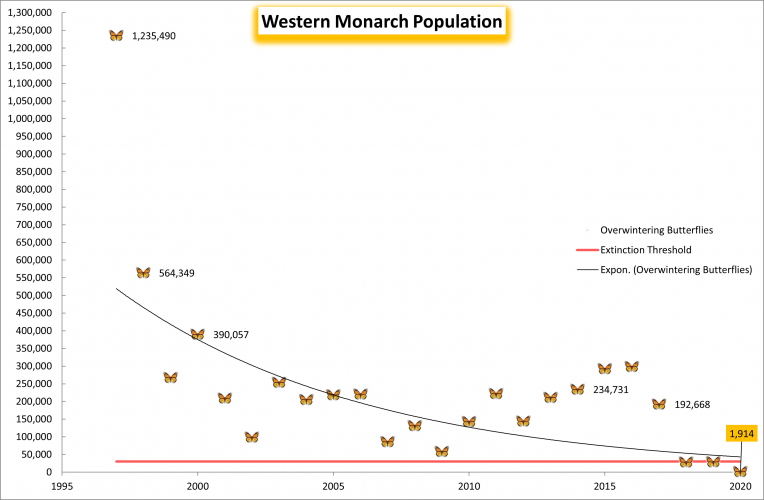 WASHINGTON, March 17, 2021 — A bipartisan group of lawmakers introduced legislation today that would provide $125 million in emergency funds over five years to save the western population of monarch butterflies from extinction.

This monarch population is found primarily in Arizona, California, Idaho, Nevada, Oregon, Utah and Washington, and overwinters on the coast of California. This past winter, only 1,914 monarchs were recorded overwintering on the California coast — the lowest number ever recorded.

The legislation would create the Western Monarch Butterfly Rescue Fund, which will provide $12.5 million a year to support on-the-ground conservation projects to stabilize and save the western population of monarch butterflies. The bill would provide an additional $12.5 million per year to implement the existing Western Monarch Butterfly Conservation Plan.

“Monarch lovers were once able to see millions of butterflies in their overwintering habitat, but now America’s most iconic pollinator is almost gone in the West,” said Stephanie Kurose, a senior policy specialist at the Center for Biological Diversity. “The MONARCH Act gives these beautiful orange-and-black butterflies a fighting chance at survival. We’re so grateful for the leadership of Sen. Merkley and Reps. Panetta, Carbajal and Davis for recognizing the urgency of the situation.”

Overall, monarch populations in the United States have plummeted more than 80% in the past two decades. Without emergency help, it’s almost certain that the western population of monarchs will disappear within 50 years. Indeed, their annual migration has already collapsed.

In February, a group of 57 lawmakers led by Sen. Merkley and Reps. Panetta and Carbajal sent a letter to the U.S. Fish and Wildlife Service urging the agency to make substantial investments in monarch conservation after its decision to forego listing the monarch under the Endangered Species Act.

“Western monarchs are running out of time and can no longer afford policy half measures,” said Kurose. “Congress must immediately pass the MONARCH Act so that future generations can experience the magic and grace of these remarkable butterflies.”