Add an Event
Newswire
Calendar
Features
Home
Donate
From the Open-Publishing Calendar
From the Open-Publishing Newswire
Indybay Feature
Related Categories: Central Valley | Environment & Forest Defense | Government & Elections | Health, Housing & Public Services | Racial Justice
Groups Sue California's Kern County for Fast-Tracking Over 40,000 New Oil and Gas Wells
by Dan Bacher
Monday Mar 15th, 2021 10:27 AM
it was clear from the meeting that the Kern County Board of Supervisors is beholden to the Western States Petroleum Association, the largest corporate lobbying group in California, the California Independent Petroleum Association, and the oil companies. The Board rubber-stamped the ordinance because of the many millions of dollars the oil industry has spent in lobbying and campaign donations in Kern County and throughout the state. 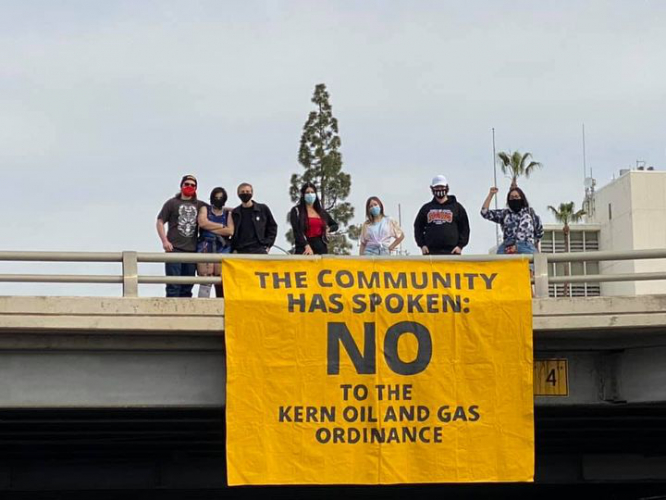 original image (720x540)
BAKERSFIELD — It’s back to court for a plan by Kern County to expand oil and gas drilling in the couny, the center of oil and gas production in California.

As many had expected, environmental and community organizations filed a lawsuit on March 10 challenging Kern County’s adoption the day before of an controversial ordinance that would fast-track permitting for thousands of oil and gas wells and eliminate future environmental reviews and public participation.

The ordinance adopted by the five-member Kern County Board of Supervisors approved a single environmental impact report (EIR) to serve as an environmental review for more than 40,000 new oil and gas projects over the coming decades, according to a press release from Sierra Club California.

Earthjustice and Center on Race, Poverty, and the Environment are providing legal representation alongside NRDC and the Center.

“The challenged Project amends the existing Kern County zoning ordinance to implement a new land use approval process for oil and gas exploration, extraction, operation, and production activities,” the complaint said. “The 2021 Ordinance and SREIR authorize the drilling of 2,697 new producing wells each year, along with a wide range of related development that includes everything from the construction of well pads, roads, and pipelines, to the stimulation of wells using harmful chemicals, to the disposal of vast quantities of contaminated wastewater via pumping into earthen pits or injection into underground aquifers. Under the 2021 Ordinance and SREIR, these intense industrial activities will occur over a land area of approximately 3,700 square miles (‘Project Area’).”

Chelsea Tu, senior attorney at the Center on Race, Poverty and the Environment that represents the Committee for a Better Arvin, Committee for a Better Shafter, and Comité Progreso de Lamont in the lawsuit, said, “This ordinance is a disaster for public health in Kern County, particularly for low-income communities and Black, Indigenous, Latinx and other communities of color that live next to oil wells and are already harmed daily by fossil fuel pollution. Kern communities are bringing this lawsuit in order to protect their families because the county has failed to do so.”

She noted that this week’s adoption of the controversial ordinance comes a year after a California appeals court struck down a “nearly identical ordinance,” which the oil industry spent more than $10 million to develop. She said the court found that Kern County failed to adequately disclose or mitigate significant health and environmental harms from anticipated projects.

“We’re suing to protect community members from this blatant disregard of the need for a thorough and honest environmental review,” stated Ann Alexander, a senior attorney at Natural Resources Defense Council (NRDC).“Kern County deserves better than a rubberstamped fossil fuel nightmare for years to come.”

Kern County accounts for 80% of all oil and gas production in California and has some of the most polluted air in the country, according to the American Lung Association’s 2020 “State of the Air” report.

The groups said numerous scientific studies show a direct link between oil and gas pollution and a wide range of serious health harms, including asthma, cancer, high-risk pregnancies and preterm births. A recent Harvard study found 34,000 premature deaths in California in a single year could be attributed to fossil fuel emissions.

“Kern County’s oil production is some of the dirtiest and most damaging in the world for people’s health and our climate,"confirmed Hollin Kretzmann, an attorney at the Center for Biological Diversity’s Climate Law Institute.“Adding tens of thousands of wells will trigger more frequent and severe droughts, heatwaves and wildfires and cause more illness and death. Kern County’s fast-track plan is an appalling violation of our state’s bedrock environmental protection and community right-to-know law.”

Low-income communities and Black, Indigenous, Latinx and other communities of color already suffer pollution-related exposure and serious health problems at disproportionate levels, in Kern County and across the nation, according to the groups. Of the Californians who live within a mile of oil and gas wells and also live within areas identified by CalEPA as most burdened by environmental pollution in general, nearly 92% are people of color.

“County leaders have turned their back on Kern, and we’re filing this lawsuit to stand up for our communities, particularly for low-income communities and communities of color who’ve been disproportionally impacted by air pollution for years,” said Elly Benson, a senior attorney at the Sierra Club. “It’s past time to focus on putting communities and climate first to build a safe, healthy future for Kern residents for generations to come.”

As was the case in the planning commission meeting in February that preceded the board meeting, the vast majority of commenters at the board meeting, including environmental justice organizer Juan Flores, labor icon Dolores Huerta, Romero Institute Attorney Daniel Sheehan, dozens of City of Arvin residents, prominent scientists and health professionals and climate advocates from throughout the state, strongly urged the Board to oppose the ordinance.

However, it was clear from the meeting that the Board of Supervisors is beholden to the Western States Petroleum Association, the largest corporate lobbying group in California, the California Independent Petroleum Association, and the oil companies. The Board rubber-stamped the ordinance because of the many millions of dollars the oil industry has spent in lobbying and campaign donations in Kern County and throughout the state.

The Western States Petroleum Association alone spent a total of $4,267,181 on lobbying in 2020. For more information, go to: http://www.counterpunch.org/...

“There is no more important issue than our energy future and balancing the concerns for our environment, equity and the economy. The women and men of our industry share the same sense of urgency as all those who participated in the board hearing about these issues, and no group will work harder to get it right. That is why we applaud the Kern County Board of Supervisors unanimous decision to certify the supplemental recirculated environmental impact report and readopt the oil and gas permit ordinance.

“Our future must be shaped by facts, not fears. And the fact is, there are tens of thousands of highly skilled, dedicated, and conscientious scientists, engineers and passionate problem-solvers across the oil and gas industry in Kern County—each of them with families and children of their own who breathe the same air, drink the same water, and share the same economic future. They play a vital role in supplying the people of California with safe, reliable energy produced under the most stringent environmental regulations in the world.

“There is no path to lasting sustainability without their continued involvement, integrity, and ingenuity.”

Hopefully, the lawsuit by the coalition of groups changed the smiles on the faces of the Supervisors, WSPA lobbyists and oil industry representatives to frowns as they face a long court battle over the fast-tracking of the oil and gas wells.

And contrary to what Reheis-Boyd said, California does not have “the most stringent environmental regulations in the world” when it comes to oil and gas production. For example, California and Alaska are currently the only two oil and gas producing states that have zero health and safety setbacks around oil and gas wells.
Add Your Comments
Support Independent Media
We are 100% volunteer and depend on your participation to sustain our efforts!