Add an Event
Newswire
Calendar
Features
Home
Donate
From the Open-Publishing Calendar
From the Open-Publishing Newswire
Indybay Feature
Related Categories: U.S. | Health, Housing & Public Services | Police State & Prisons | Racial Justice
Mumia Health Update / March 6 Global Virtual Street Meeting
by The Jamal Journal
Thursday Mar 4th, 2021 6:25 PM
On Saturday Mumia Abu-Jamal was hospitalized. When he put in a sick call slip and was seen by the SCI Mahanoy medical staff he was taken immediately to the hospital suffering chest pain and shortness of breath. Diagnosed with congestive heart failure he was given a battery of tests...At the hospital his seriology blood test was positive for Covid-19. 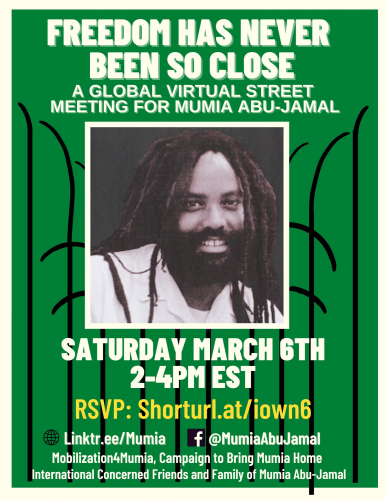 As reported by WHYY and the Philadelphia Tribune, during the March 3 press conference at DA Krasner's office, supporters received a call confirming that Mumia Abu-Jamal has now tested positive for COVID (watch the full video from the March 3 event here or embedded above). We await direct communication from Mumia to further update his supporters. Read the entire March 2 press release, which announced the 11am, Wednesday Feb. 3 press conference at DA Krasner's office. 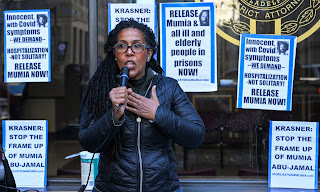 1. The immediate and unconditional release of Mumia Abu-Jamal, who has congestive heart failure & has been diagnosed with COVID-19 and is vulnerable.

2. The immediate release of all political prisoners.

3. The immediate release of all elders, aging prisoners over the age of 50, people who have contracted COVID, and all others who are especially vulnerable to death through COVID-19.

On Saturday Mumia Abu-Jamal was hospitalized.  When he put in a sick call slip and was seen by the SCI Mahanoy medical staff he was taken immediately to the hospital suffering chest pain and shortness of breath. Diagnosed with congestive heart failure he was given a battery of tests.  It is unclear how long Mumia was hospitalized, but by Wednesday he was in isolation in the prison's infirmary.  This diagnosis of a weakened heart requires careful monitoring and treatment.

At the hospital his seriology blood test was positive for Covid-19. This followed three negative, or false negative COVID-19, tests  and a negative antigen test administered recently by the medical staff at SCI Mahanoy.

After initial treatment for fluid build up in his body, he was discharged from the local private hospital and put in isolation in the prison infirmary.   On Wednesday he was able to reach his supporters who were gathering in Philadelphia at 3 Penn Sq. outside the DA's office, demanding that he receive appropriate medical attention.  He expressed his gratitude for the world wide support and attention to his and other elders with life threatening conditions in prison.

We must remember that the prison infirmary at SCI Mahanoy is the very same place that in 2014 diagnosed Mumia as having critically low blood sugar, ie a diabetic episode or reaction to a topical steroid he was taking for a raging skin condition.  The infirmary then ignored the notation in his chart to monitor his blood sugar levels for three weeks.  It was not until  he fainted and went into renal failure that he was rushed to the hospital.  His lawsuit in that case Abu-Jamal v. Wetzel is still pending.  It took a federal civil rights lawsuit, the order of a preliminary injunction, and world wide protests for Mumia to receive the fast acting anti viral cure to his belatedly diagnosed Hepatitis C.

The Pennsylvania Department of Corrections has repeatedly failed to provide adequate care for our family members.

We. the people, must toss aside our fears.  It is not the time to hesitate and we cannot give into despair. Decarceration is not a dream; it is a necessity.

We need to take action now! 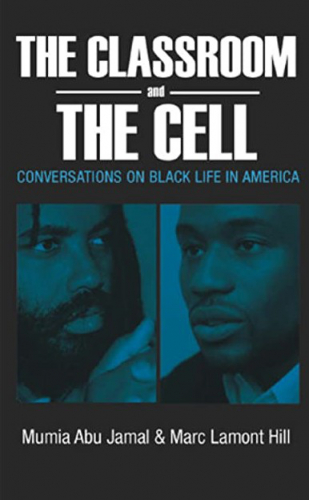 original image (386x623)
AMY GOODMAN: Before we go, I wanted to end, Marc Lamont Hill, by asking you about what’s happening with Mumia Abu-Jamal —

AMY GOODMAN: — who is in prison in Pennsylvania. You co-authored a book with him years ago titled The Classroom and the Cell: Conversations on Black Life in America. Mumia’s lawyers confirmed Wednesday he’s tested positive for COVID-19, also has congestive heart disease. Mumia also suffers from preexisting conditions of liver disease, which advocates say is directly related to the Pennsylvania Department of Corrections’ failure to treat his hepatitis C in a timely fashion. His doctor, Dr. Ricardo Alvarez, says the only appropriate treatment is freedom. What do you think needs to happen now? And what was your response to hearing about his COVID-19 diagnosis?

MARC LAMONT HILL: I spoke to Mumia a week ago, right before he went into the hospital. He had labored breathing. He was clearly very ill. I didn’t quite know what was going on, but I knew that he was very ill. And it was no surprise to hear that he’s being rushed — that he was rushed to the hospital. They pumped almost 10 pounds of fluid of some sort out of his body.

He’s been made sick by this prison system, whether it’s not treating his hep C, as you mentioned, or the fact that he got COVID. And there are no visitors coming in. There are no guests coming in. The only people who are giving and transmitting COVID through this prison are prison guards, who come in, they don’t wear masks, not just as a matter policy, but as a matter of some weird right-wing principle. And as a result, people are dying.

And so, the only resolution, the only possible solution, the only fair solution, is to let Mumia out of prison — not just Mumia, but all political prisoners, all people over 50, not just all political prisoners, quite frankly, although people like Russell Maroon Shoatz, who’s 77 years old and who survived COVID but is suffering from cancer, should be sent home. All of our elders should be sent home. This is an opportunity to exercise COVID compassion. We’ve seen over the last six months what happens —

MARC LAMONT HILL: Let them go. Free them all.

AMY GOODMAN: Well, Marc Lamont Hill, I’m also glad to be talking to you with you being over COVID right now. Marc Lamont Hill and Mitchell Plitnick are co-authors of the book Except for Palestine: The Limits of Progressive Politics.

The original content of this program is licensed under a Creative Commons Attribution-Noncommercial-No Derivative Works 3.0 United States License. Please attribute legal copies of this work to democracynow.org. Some of the work(s) that this program incorporates, however, may be separately licensed. For further information or additional permissions, contact us.
https://www.democracynow.org/2021/3/4/mumi...
§KPFA Hard Knock Radio interviews Johanna Fernandez
by reposted by the Jamal Journal
Thursday Mar 4th, 2021 6:55 PM 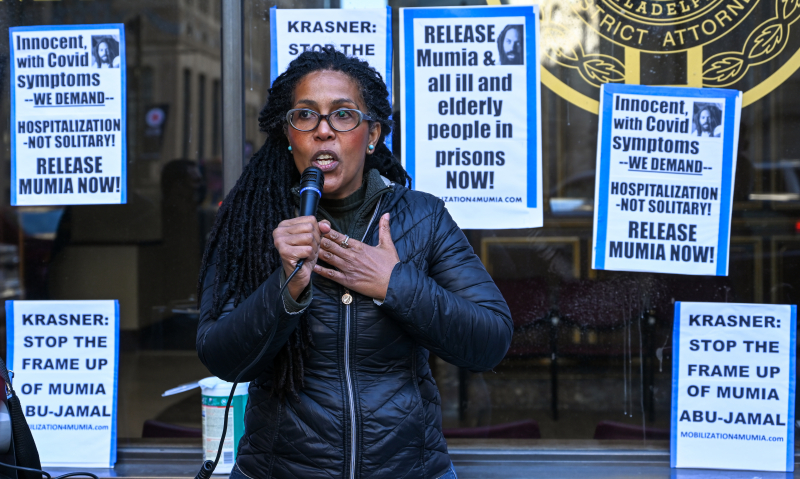 original image (7678x4602)
Listen to the Hard Knock Radio interview here: https://kpfa.org/episode/hard-knock-radio-march-4-2021/ (PHOTO: Johanna Fernandez of the Campaign to Bring Mumia Home speaks outside of DA Krasner's office on March 3, 2021. Photo by Jamal Journal staff photographer Joe Piette)
https://kpfa.org/episode/hard-knock-radio-...
Add Your Comments
Support Independent Media
We are 100% volunteer and depend on your participation to sustain our efforts!