Add an Event
Newswire
Calendar
Features
Home
Donate
From the Open-Publishing Calendar
From the Open-Publishing Newswire
Indybay Feature
Related Categories: Santa Cruz Indymedia | Police State & Prisons
Anti Police-Terror Project Files Liability Claim Against City of Santa Cruz
by Santa Cruz Police News
Thursday Mar 4th, 2021 5:36 PM
The Anti-Police Terror Project (APTP) has filed a liability claim against the City of Santa Cruz. "Claimant seeks damages resulting from an alleged violation of civil rights related to law enforcement action," city staff states in an agenda report for the March 9 meeting of the Santa Cruz City Council. Other than the one quote from city staff, very few details have been released to the public about the claim, except that the incident in question occurred on May 29, 2020. The City Council is expected to discuss the claim during its closed session on March 9, and a motion to reject APTP's claim has been placed by city staff as item #14 on council's consent agenda.

According to the their website, The Anti Police-Terror Project is, "a Black-led, multi-racial, intergenerational coalition that seeks to build a replicable and sustainable model to eradicate police terror in communities of color. We support families surviving police terror in their fight for justice, documenting police abuses and connecting impacted families and community members with resources, legal referrals, and opportunities for healing." 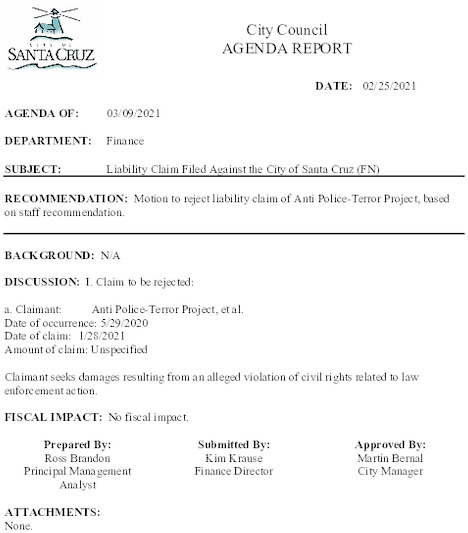 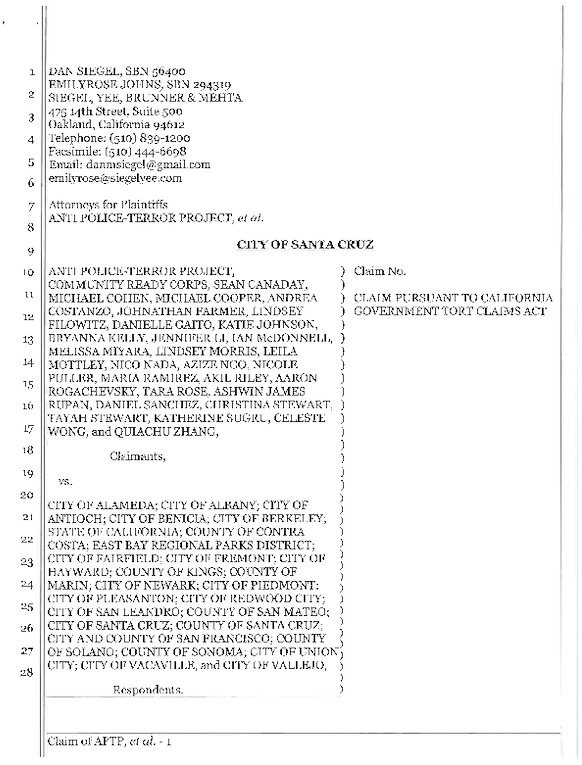 "This claim is based on the use of violent, unlawful, and unconstitutional crowd control tactics used against peacful demonstrators" in Oakland during the demonstrations beginning on May 29, 2020, following the police murder of George Floyd in Minneapolis, Minnesota.
Add Your Comments
LATEST COMMENTS ABOUT THIS ARTICLE
Listed below are the latest comments about this post.
These comments are submitted anonymously by website visitors.