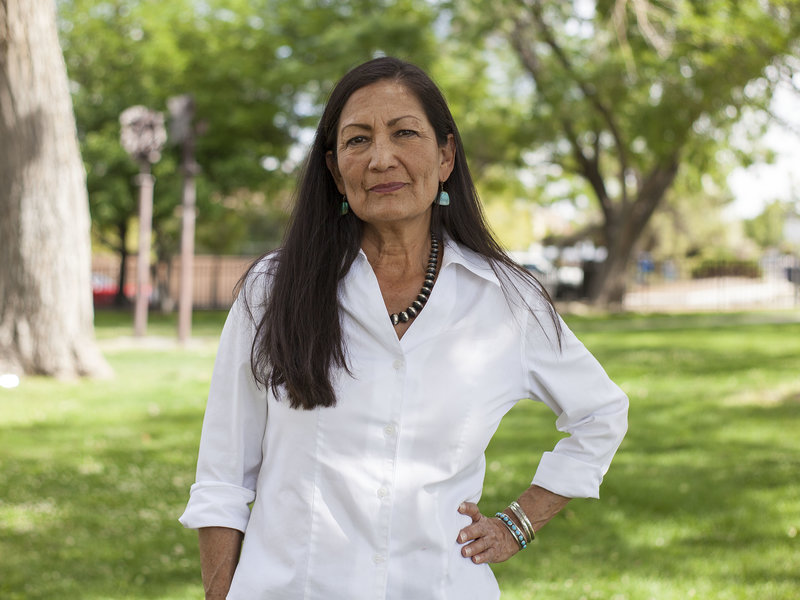 Deb Haaland worked on President Obama's 2008 campaign before chairing New Mexico's Democratic Party. Now she's a US Congresswoman and the nominee for Secretary of the Department of the Interior.

Climate change is one of the most universal environmental and social justice issues of our time.

The Department of the Interior (DOI) is responsible for upholding the Federal government’s treaty and trust responsibilities to Native American tribes, which includes managing more than 55 million acres of lands held in trust for Native Americans by the government. After centuries of failed promises and broken treaties, President Biden wants to restart its relationship between land management agencies and Tribal nations in a substantive way, as noted in President Biden’s January 26 memorandum. Having a tribal member heading up the DOI who could engage in meaningful consultation on a direct nation-to-nation basis would be the best way to establish trust. 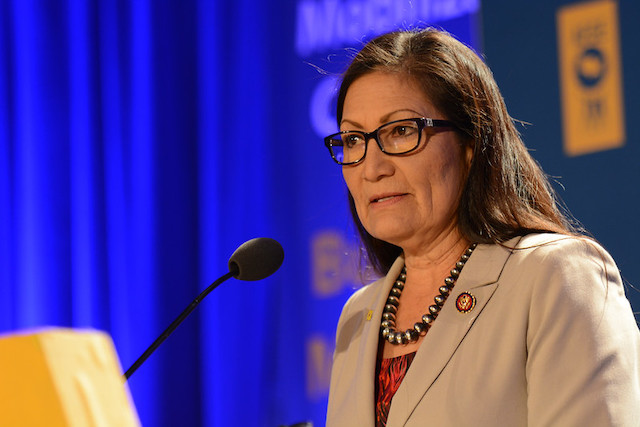 That’s one of a multitude of reasons Elected Officials to Protect America (EOPA) urges a historic confirmation of Representative Debbie Haaland, (NM). When confirmed, Representative Haaland will be the first American Indian to lead DOI and the first American Indian Cabinet Secretary in our nation’s history. This would be a major step forward in upholding President Biden’s commitment to seek climate solutions and address environmental injustice.

Rep. Haaland’s committee experience has allowed her to build a deep understanding of the complex portfolios under the Department’s purview. She serves as the Vice Chair of the House Natural Resources Committee and Chair of the National Parks, Forests, and Public Lands subcommittee.

“Rep. Haaland not only recognized that fossil fuel extraction on public lands has been fueling the climate crisis, she's taken action. One of her bills directs the DOI and U.S. Forest Service to achieve net-zero greenhouse gas emissions from public lands and waters,” said Alex Cornell du Houx, former Maine Representative, Marine combat veteran, and President of Elected Officials to Protect America (EOPA). “She is a skilled negotiator who has successfully brought leaders from both parties to the table in order to protect our lands and people’s rights. Her record of defending the environment while promoting justice and equality is testimony to why Elected Officials to Protect America stands by her nomination and urges swift confirmation.”

About one-quarter of all US carbon emissions come from fossil fuels extracted on public lands, according to the U.S. Geological Survey.

Rep. Haaland has pledged to transform the department from Trump’s fossil fuel development agenda into a promoter of renewable energy with policies to mitigate climate change.

“A former Secretary of the Interior once proclaimed his goal was to, ‘civilize or exterminate’ Native Americans. Not only is it poetic justice that Rep. Haaland has been nominated for his former position, it’s true justice. Our public lands are part of the soul character of ‘we the people.’ They are the birthright of every American. That’s why we need a steward that respects and honors them by protecting them for future generations, not selling them off to the highest bidder,” said Oregon State Representative Paul Evans, EOPA Co-Chair and veteran. “Rep. Haaland’s record on the environment and justice speaks for itself. I, along with all our EOPA members, look forward to her confirmation.”

She sponsored the “Thirty by Thirty Resolution to Save Nature a bill that would set a national goal of protecting 30 percent of U.S. lands and oceans by 2030 – a plan since adopted by the Biden administration as a priority for his environmental agenda. Scientists say it will help stem the ongoing extinction crisis, and the deterioration of the natural world.

She helped secure passage of the America's Conservation Enhancement Act legislation to conserve public lands and waters while also expanding access to recreation. She backed the Recovering America’s Wildlife Act, which would provide nearly $1.5 billion annually to states and tribes to restore at-risk wildlife species.

Climate change is not a distant threat for frontline communities — it is a clear and present danger.

“As a state representative and veteran from New Mexico I’m honored to resoundingly support Rep. Haaland’s confirmation. Her parents were veterans, and as she’s stated, they showed her their love of our land. I know that connection with our public lands, it helped heal my son after his tour of duty. Amongst other environmental achievements she helped secure passage of the Great American Outdoors Act, which included funding in perpetuity for the Land and Water Conservation Fund,” said New Mexico State Representative Debbie Maria Sariñana, EOPA Co-Chair and Air Force veteran.

Rep. Sariñana was part of an EOPA delegation of veterans who are lawmakers, who flew to Washington D.C. to meet members of Congress about LWCF.

“Rep. Haaland understands the impact of the injustices across an array of communities and will be dedicated to restoring equity and justice to all people on our public lands. Given the DOI’s historic injustices to tribal nations it’s high time the department will be led by a Native American,” concluded Rep. Sariñana.

Rep. Haaland has worked to address environmental racism and fight climate change. She is the lead on the THRIVE Agenda which lays out the unifying principles necessary to build a society that enables dignified work; increased racial, economic, gender, and environmental justice; healthy communities; and a stable climate. Along with Sen. Cory Booker, Haaland introduced a $100 billion plan to clean up legacy pollution that disproportionately impacts Black, Brown, and Indigenous communities.

In recent years, communities of color and minority groups have sometimes experienced violence at the hands of some tasked with protecting the public. From the tasing of Darrell House at Petroglyph National Monument, to crowds of peaceful protestors in Lafayette Square being violently attacked. These incidents have shown a pattern of excessive force and failure of oversight by the National Park Service. As Secretary, Rep. Haaland will ensure proper reforms are enacted for all DOI law enforcement activities, and all people are afforded safe, equitable access to our public lands.

“Rep. Haaland’s nomination is an opportunity to right many past wrongs, especially the badly mismanaged U.S. Treaty obligations to our native tribes. Her unwavering commitment to our public lands and natural resources is deep and unshakeable,”said Former New York Assistant Assemblyman Speaker Félix W. Ortiz, EOPA National Leadership Council Member, Army Veteran (Ret).”Her confirmation would be both a historic step toward reckoning with a troubling legacy while building new, lasting, opportunities and equitable achievements.”

In 2018, she became one of the first two Native women in Congress, and has a track record of working across partisan lines. She is a member of the Laguna Pueblo, one of 574 sovereign tribal nations located across 35 states. According to the 2010 census, about 2 percent of the U.S. population identifies as American Indian or Alaskan Native.

Born to a Native American mother who served in the Navy and a Norwegian American father who was an active-duty Marine, Haaland attended 13 public schools as the family changed military bases. She worked at a bakery, and later attended law school with the help of student loans and food stamps.

President Biden’s goal of building back better by investing in clean energy technologies, protecting public lands and bringing environmental justice to fence-line communities will create thousands of jobs and is economically sound. The U.S. could meet about 90 percent of its energy needs with wind, solar and storage alone.

Before the pandemic, the oil and gas industry was struggling with excessive debt and had begun laying off employees all while major oil and gas CEOs were getting paid tens of millions of dollars in bonuses and salaries.

Clean energy is the fastest-growing energy industry in the U.S. In 30 states and the District of Columbia, there are more solar and wind energy jobs than coal and gas jobs. Clean energy jobs pay well above the national average, have good benefits, and with Biden’s American manufacturing plan won’t be outsourced.

https://protectearth.news/elected-official...
Add Your Comments
Support Independent Media
We are 100% volunteer and depend on your participation to sustain our efforts!