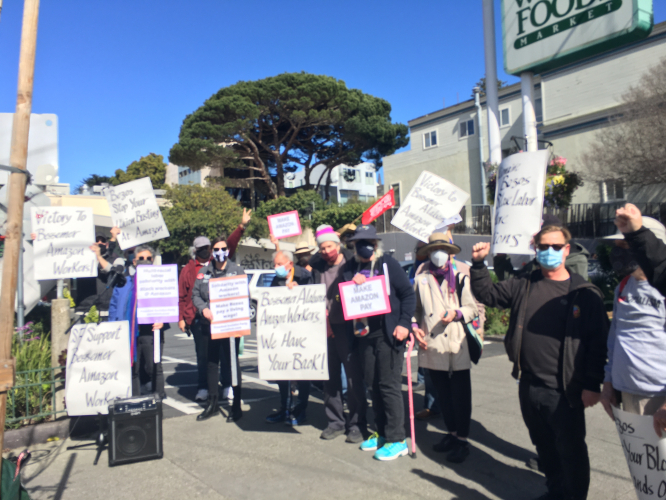 original image (4032x3024)
As part of a national day of solidarity with the Bessemer Alabama Amazon workers on February 20, 2021, a rally was held at the San Francisco Whole Foods store in Noe Valley.

The rally was the first in San Francisco to support the Bessemer workers struggle. It was joined by trade unionists and people in the community who reported on a struggle to support grocery workers who tried to organize across the street from the Amazon Whole Foods store.

Speakers talked about the role of Bezos spending millions of dollars to stop unionization of the workers at the Amazon warehouse and the systemic racism by Bezos,

It was also reported that Amazon has spent $200 million buying an entire square block in San Francisco to build a major warehouse in the City which which would threaten UPS Teamsters and other workers and small stores in San Franciscoo.

Community members who attended the rally plan to conduct a weekly leafletting at the local farmers market to inform the community about the role of Bezos and Amazon's union busting.

This national day of solidarity action was called by the Southern Workers Assembly. It was endorsed by the United Front Committee For A Labor Party which initiated the San Francisco solidarity rally.

We send you heartfelt greeting of solidarity from Namibia beyond the ocean to your robust struggle and express our fierce commination of what is happening in Alabama to the Amazon workers as they fight for the Union rights and against systemic racism.

As the nine unlawfully and illegally dismissed Branch Executive Committee of China National Nuclear Rossing Uranium Ldt, we stand in complete solidarity with all the workers fighting to defend and expand their rights and the discrimination you’re fighting back is just one of many injustices. It’s a blatant example persecution.

We were dismissed on the 29th September 2020 and up to date the Mine Workers Union of Namibia’ National Executive Committee and Regional Committees did not to challenge or condemn the company’s actions and neither did they express any solidarity towards us.

We firmly believe that the only way to achieve unity as working class and be liberated once and for all, is by strengthening the power of workers movements and unity all over the world, a task that we are apportioned to fight.

We call on all the workers and comrades to stand with our comrades of Bessemer Alabama Amazon Workers in solidarity and condemn any employer or individuals that violates workers rights globally.

Our Branch Executive Committee stand in solidarity with the Namibian fishermen who after a 5-year struggle have emerged victorious and retained their employment, solidarity with dockworkers at Walvisbay Harbour who have been illegally dismissed and the striking Shoprite workers that won their demands and returned to work.

The Union will always advocate for fairness, equal treatment and justice for all and remember that victory is certain if we all unite and stop this vicious capitalist masters. 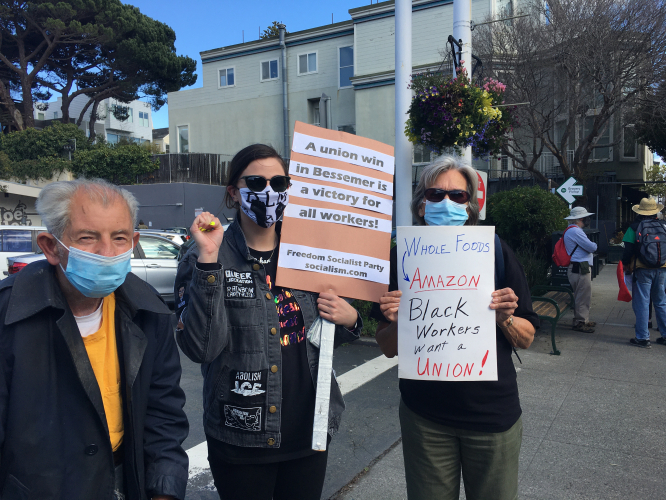 original image (4032x3024)
Speakers talked about the slave labor conditions and the role of Black workers in the South who are fighting systemic racism and union busting
https://youtu.be/DWG8vFxgB3w
§Victory To Bessemer Workers
by Labor Video Project
Saturday Feb 20th, 2021 10:05 PM 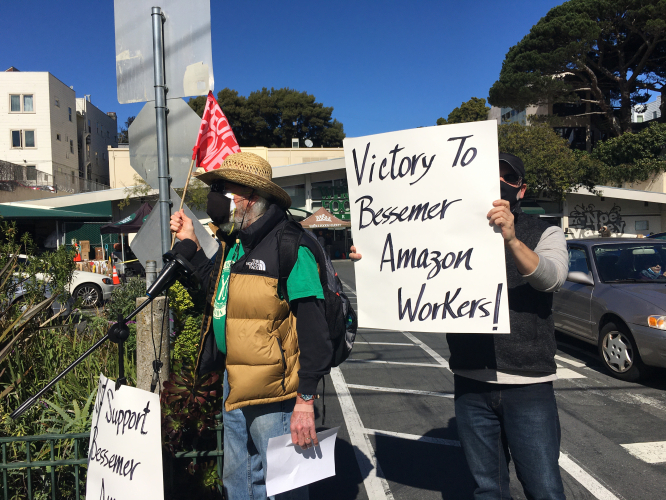 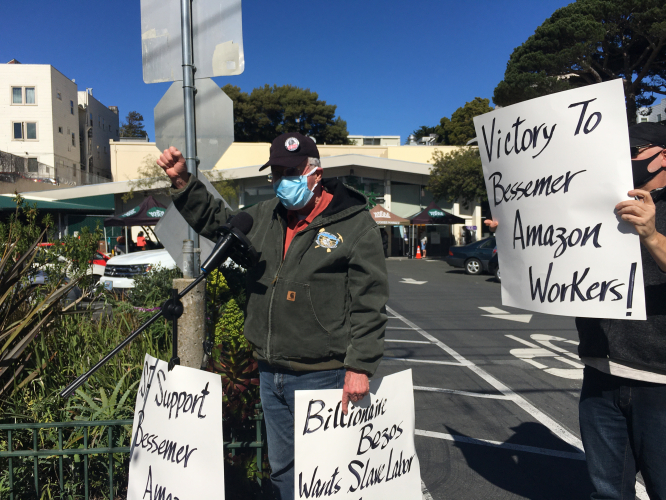 original image (4032x3024)
Many of the speakers attacked Bezos and the billionaires who have profited from covid yet continue to attack the workers.
https://youtu.be/DWG8vFxgB3w
§Community Support For Bessemer Amazon Workers
by Labor Video Project
Saturday Feb 20th, 2021 10:05 PM 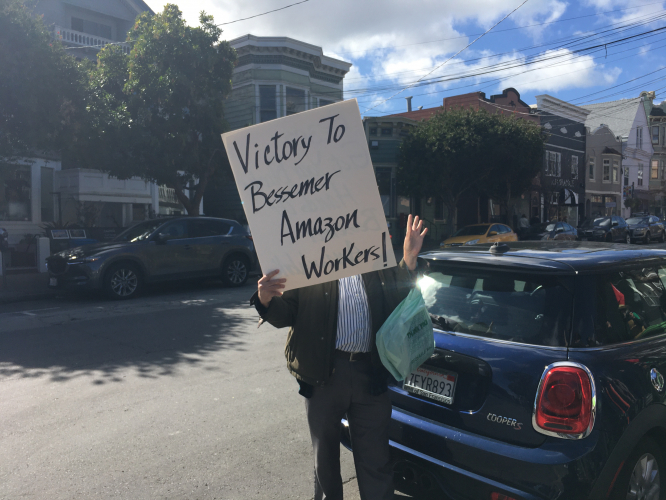 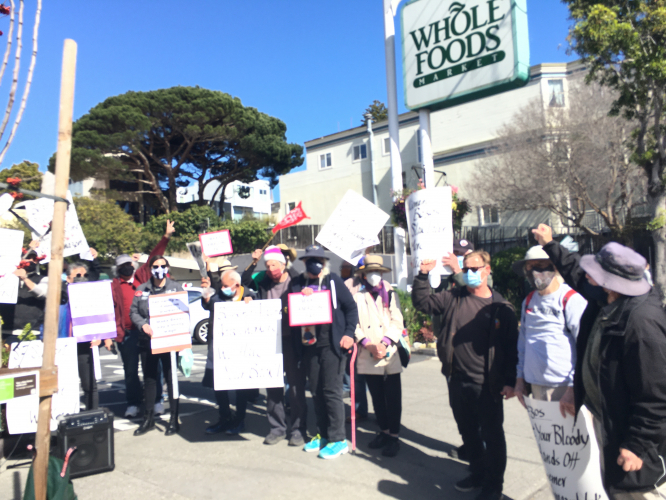 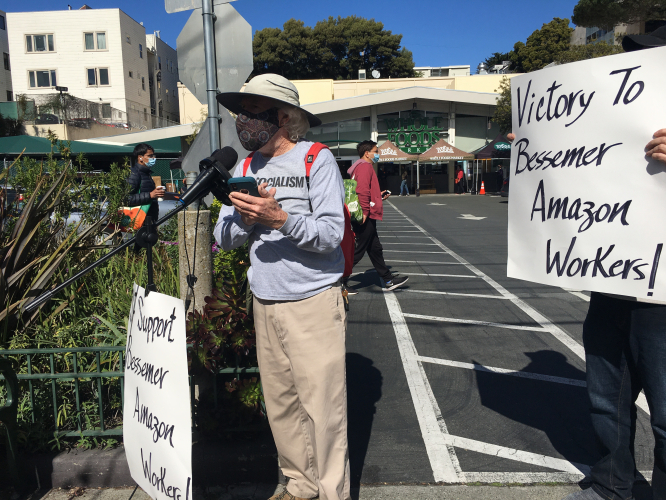 original image (4032x3024)
Speakers reported on the role of billionaires to continue to bleed the people of the United States and the world. There are 27 billionaires in San Francisco whose wealth could easily deal with budget deficits.
https://youtu.be/DWG8vFxgB3w
Add Your Comments
Support Independent Media
We are 100% volunteer and depend on your participation to sustain our efforts!