Add an Event
Newswire
Calendar
Features
Home
Donate
From the Open-Publishing Calendar
From the Open-Publishing Newswire
Indybay Feature
Related Categories: East Bay | Health, Housing & Public Services
Yes, Victoria, There is a Berkeley Tenants Union
by Anon Author
Thursday Feb 18th, 2021 8:18 PM
YIMBY lobbyist Victoria Fierce is claiming that there is not a Berkeley Tenants Union. There is one. Victoria is lying (again). 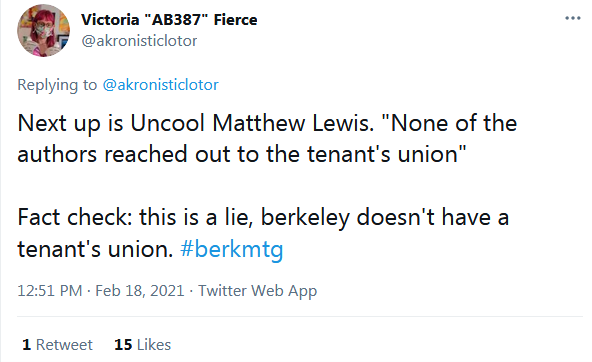 Today/February 18th, the Berkeley city council land use, housing, and economic development committee held a meeting regarding changing zoning laws to permit quadplexes in all neighborhoods. This is an admirable goal, but some low income renters are concerned that a quadplex building rush could result in developers demolishing low income housing in order to build high end quadplexes. Some residents want a requirement for new 4plexes to include low income units, so the new housing isn't only for market rate and luxury buyers.

Berkeley resident and community organizer Matthew Lewis spoke; "None of the authors reached out to the Berkeley tenants union what so ever, or tenants groups to see how this measure could be done in a just way". Lewis said the mayor's office would reach out them, but there was "complete silence on this matter". Lewis said the public was told there was an affordability requirement in the measure, but "that's not true". The affordability clause only applies to developers who elect to use the density bonus, "which many for-profit developers will not do". The affordability clause is not a requirement, it is an option.

The original Berkeley Tenants Union was created in 1969, an important year in Berkeley history. The year of People's Park, and so many other revolutionary actions. They fought against unfair evictions, and rent increases. They organized a rent strike for 1970. The fought for rent control. They worked with the Black Panthers to public a Tenants Rising newsletter. They offered tenants' rights teach-ins. This iteration of the Berkeley Tenants Union lasted until the early 1980s, when it went dormant.

A more contemporary version of the Berkeley Tenants Union launched their online blog in 2013 to organize against renters' security deposits being wrongfully taken from them. This version of the union lasted until 2018, when there was a quasi-relaunch, which maintained the same continuity with a restructured leadership.

Victoria moved to Oakland from out of state in 2015, well after the contemporary Berkeley Tenants Union started organizing. Victoria start appearing in Berkeley city council meetings, getting in arguments with local residents, and speaking out to council in opposition to local activists, against rent control and against low income housing requirements. Victoria Fierce has been a source of constant animosity and disinformation regarding both Berkeley governmental meetings and community organizations. Fierce has an obsession with Berkeley and it's residents, despite not actually living in Berkeley. Victoria had a prior Twitter account which was used to harass actual Berkeleyans. Victoria also made an invalid Nextdoor-dot-com account for a residence she didn't live in to gather information on Berkeley residents to dox them. Shortly after the Nextdoor incident, Fierce closed her Nextdoor and Twitter accounts. Victoria spent less time on social media attacking Berkeleyans, and focused on a political career. In 2019, Fierce started up a new Twitter account, and continued an ongoing fixation with Berkeley... spreading disinformation about a city that Victoria still to this day doesn't actually live in. Six years of obsessive animosity against people who aren't Victoria's neighbors, in a city Victoria doesn't live in.

Victoria is a lobbyist for CARLA - California Renters Legal Advocacy and Education Fund. Despite the name, and their mission statement, CARLA spends a lot of time antagonizing tenant unions and other grassroots renters organizations. Fierce has also made associations with developers and politically connected people, who try to pitch Victoria up against actual progressive. Fierce has a reputation for bullying, for slandering people, for harassment and doxing, and lying. Victoria is paid to lie. The incorrect statement she made about Lewis and the Berkeley Tenants Union is part of her job.

There is indeed a Berkeley Tenants Union. If you are a Berkeley renter, particularly a lower income renter, then you should join it. Other Berkeley residents should support it. If you don't live in Berkeley, you should join or support your local union. If you don't have a local union, then start one.
Add Your Comments
Support Independent Media
We are 100% volunteer and depend on your participation to sustain our efforts!